TODAY: In 1957, United States Customs confiscates 520 copies of Allen Ginsberg’s Howl and Other Poems printed in England on the grounds of obscenity.

In which Peter Nowogrodzki shares a really big lunch with Jim Harrison · Art Spiegelman on Trump, despair, and the forgotten genius of Si Lewen · How a dictionary got into the marriage equality debate · Patty Yumi Cottrell doesn’t find writing therapeutic in any way · Presidential politics as reality TV and realist fiction · Introducing the ten 2017 Whiting Award winners (and a party report from the reception) · Pankaj Mishra on progress, popular history, and our bleak and divided global moment · If fiction changes the world, it’s going to be YA · On Get Out, Claudia Rankine, and the horror of black hypervisibility · In which we calculate how many books you will read before you die · Gabrielle Bellot on Derek Walcott, poet of the twilight and the Caribbean
The Best of Book Marks:
“A bath tub version of Moby-Dick”: TIME Takes a bite out of Jaws · “The simmering, underground power of teenage sexuality”: On Deborah Willis’ The Dark and Other Love Stories · Neil Gaiman’s American Gods as Wagnarian noir · In her Paste review of Dear Ijeawele, Shannon Houston says “we cannot have a feminist movement in 2017 without Chimamanda Ngozi Adichie” ·  The “troubled clan of misfits” that populate Mary Karr’s 1995 childhood memoir The Liar’s Club ·  A 1987 New York Times take on “the malicious glee” of Tom Wolfe and The Bonfire of the Vanities · Margaret Atwood’s NBCC Lifetime Achievement Award speech on the important work book critics do
Lit Hub Daily
Share: 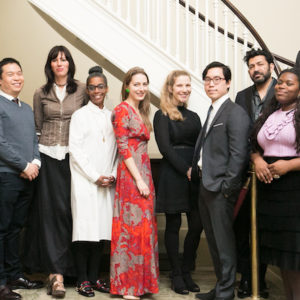 The Whiting Awards began in a pre-reception upstairs in the New York Historical Society’s library, amidst card catalogues...
© LitHub
Back to top