TODAY: In 1914, James Joyce’s Dubliners is published, in a run of 1250 copies. In its first year, the book sold only 499 copies—one short of Joyce being able to contractually profit from it.

The beachiest, buzziest, bookiest list of them all: the ultimate books of summer 2019 preview • Barbara Hurd on the lessons of Robert Macfarlane’s Underland • Sharon Marcus on the early origins of celebrity worship • Andrea Lawlor recommends some essential bookselling reads • David Epstein on the genius of the self-taught musician • How Beyoncé revolutionized the American political landscape • Lauren Acampora on the links between dreamlife and creativity • James Tate Hill on 5 audiobooks with complicated parent/child relationships • A lover’s view of Picasso: on Françoise Gilot’s classic account of life with a “great man” • On Alabama’s dark history of brutalizing black women’s bodies • What David Bowie borrowed from William Burroughs • Jim DeRogatis on R. Kelly and separating art from the artist • Ellena Savage on the complicated past, present, and future of pools • Five books with

complex and credible child narrators • Elliot Ackerman travels to a refugee camp on the Syrian border in 2015, after the story’s “gone elsewhere” • Aleksandar Hemon on the preoccupations of his 10-year-old self • What the 39,933 items on Peter Matthiessen’s computer mean for the art of biography • Suketu Mehta on the origins of anti-immigrant rhetoric • Fighting to save the real-life pharmacy from James Joyce’s Ulysses • HAPPY FATHER’S DAY: John James on learning about the death of his father in a poem by his grandmother · A brief literary history of terrible dads · Dean Kuipers on the things you talk about to avoid really talking · Sybille Lacan on the absences of her famous father · When Red Sox great Luis Tiant was reunited with his father after 14 years

The Fortunate Pilgrim to Don DeLillo’s Underworld • This week in Secrets of the Book Critics: Annie Galvin on Samuel Beckett, Fever Dream, and Jia Tolentino • New titles from Aleksandar Hemon, Brian Evenson, and Mona Awad all feature among the Best Reviewed Books of the Week

James Ellroy walks into a steakhouse and orders clams • Peter Houlahan on how Los Angeles became the “Bank Robbery Capital of the World” • What to read if you like Big Little Lies • Mike Chase investigates the war on margarine and other pseudo-dairy at the turn of the century • Becky Masterman on what Truman Capote missed in his true crime opus • Zach Vasquez reconsiders Bob Dylan as a hard-boiled poet • All the psychological thrillers you need to read this June •Daneet Steffens‏ on Mick Herron, the master of misfit spy thrillers • Sandra Ireland on the many commonalities of folklore and crime fiction

Your Favorite Reads: this week's most clicked-on books at Book Marks. 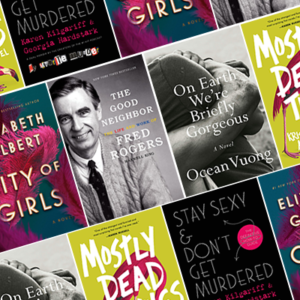 Your Favorite Reads: this week's most clicked-on books at Book Marks.

Hello from Book Marks, Lit Hub’s “rotten tomatoes for books!” How It Works: Every day, our staff scours the most...
© LitHub
Back to top