Andrew Keen on What We Mean By Leadership

History has reappeared with a cathartic vengeance. War, inflation, a global pandemic, multiple refugee crises, the apocalyptical threat of nuclear conflict. We are returning to history, to what the Dickensian economic historian Helen Thompson described, when she appeared on Keen On earlier this month, as “Hard Times.”

Or, at least, history appears to have returned. But the problem is that, in today’s hard times, we are burdened with an all-too-contemporary style of leadership. As history explodes all around us, it seems like we are missing the competently public spirited captains to navigate the storm. Leadership, particularly political leadership, is in crisis. As a Pew Research poll published this week reveals, nobody has confidence in any of our leaders: not in the gaffe-prone Biden, nor in Scholz, Macron or Johnson, certainly not in Xi or Putin.

So where is Winston when we need him?

The Pew poll reports that the only leader who gives us confidence is that most unchurchillian leader—the master of straight-talking informality, the ex-comedian Volodymyr Zelenskyy. While the Ukrainian president’s popularity has given popular business theorists like Adam Grant the opportunity to seduce us with more new-age hyperbole about “empathy” and “service,” the Zelenskyy phenomenon is probably more of a symptom than a fix to our crisis of leadership.

Besides, as Harvard University’s Barbara Kellerman, the author of many books about leadership (including Hard Times: Leadership in America), explained when she appeared on Keen On earlier this week, the Zelesnkyy model isn’t replicable. He is a brilliantly unscripted one-off, riffing off unique historic circumstances.

In early September 2020, which now feels like another century, the historians Anne Applebaum and Michael Ignatieff appeared on Keen On to celebrate Applebaum’s then newly published Twilight of Democracy: The Seductive Lure of Authoritarianism. This bestselling book now reads with a chilling prescience—about Putin and Trump, in particular, but also about the broader lacunae of leadership in western democracies.

Applebaum writes about La Trahison des Clercs, the 1927 warning by the French writer Julian Benda about the failure of early 20th-century European intellectuals to confront authoritarianism. Applebaum is too good a historian to suggest that history simply repeats itself. But her resurrection of Benda is instructive and should read as a warning about the need for competent captains to navigate today’s political serious storms—storms which, as Michael Ignatieff warned when he

appeared on Keen On last weekend to discuss Ukraine, might even require the use of nuclear brinkmanship.

It’s easy to be skeptical given the dubious moral qualities of many graduates of America’s most illustrious law and business schools.

So where are we going to find honest, competent leaders in whom we trust not to blow up the world. We can’t resurrect Winston, of course. As Geoffrey Wheatcroft, the author of Churchill’s Shadow, reminded me when he appeared on Keen On earlier this year, the real Winston Churchill—in his morally ambiguous lifestyle and spiteful racism—was anything but Churchillian.

According to Kellerman, who has taught for many years at Harvard’s Kennedy School of Government, good leaders can be schooled. She argues that the one American institution which has successfully bred generations of competent leadership is the military. So could the West Point model be replicated at Berkeley or Yale? Should our leaders be going to leadership institutions like the Kennedy School, rather than the law and business school elites who have collectively contributed to today’s lacunae of authority.

It’s easy to be skeptical, of course. Especially given the dubious moral qualities of many graduates of America’s most illustrious law and business schools—like Bill Gross, the billionaire “Bond King,” who the NPR Planet Money co-host and author Mary Childs recently discussed on my show. The problem with privately motivated financial geniuses like Gross is the utter foreignness of the public service ideal. They just can’t imagine doing anything that benefits anyone except themselves.

But not everyone coming out of America’s top schools are as selfish as Bill Gross. Take, for example, the daughter of Ukrainian immigrants, who graduated from Princeton in 1980 and later went on to get her masters degree at the National Defense University’s National War College in 2001. Marie Yovanovitch later went on to become the US ambassador to Kyrgyzstan, Armenia and then Ukraine between 2016 and 2019. Yovanovitch was just another obscure US diplomat operating on the Euro-Asian edge before she was swept into history’s maelstrom by the criminal antics of Donald Trump and Rudy Giuliani. And now, of course, she’s a household name who, like

Fiona Hill, selflessly stood up to Trump and his wannabe authoritarian clowns.

Yovanovitch, who retired from the State Department in 2020, is anything but Bill Gross in her commitment to public service. She appeared on Keen On earlier this week to talk about her new bestselling memoir Lessons From the Edge. In person (or, at least, over Zoom), she was everything one would expect of a public servant dedicated to public service—smart, shy, obstinate, articulate, above all uncompromisingly principled. A leader.

So how to mint more Marie Yovanovitchs? I somehow doubt that Yovanovitch’s selfless commitment to public service was created either at Princeton or the National Defense University. As

Lessons From the Edge suggests, these values were inherited from her immigrant parents, who fled both the Soviet Union and the Nazis. Barbara Kellerman might be right that we need military style schools to create a new generation of American leaders. But, in our hard times, public service can’t just be taught. It needs to be nurtured by the cultures and families that created Marie Yovanovitch.
Andrew KeenAnne ApplebaumauthoritarianismBarbara KellermanBill Grossfiona hillGeoffrey WheatcroftJulian BendaKeen OnleadershipMarie YovanovitchMary ChildsMichael IgnatiefUkraineVolodymyr ZelenskyywarWinston Churchill
Share: 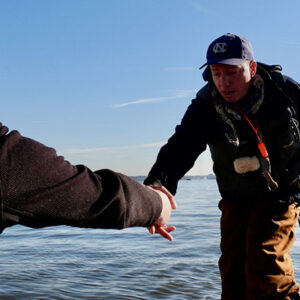