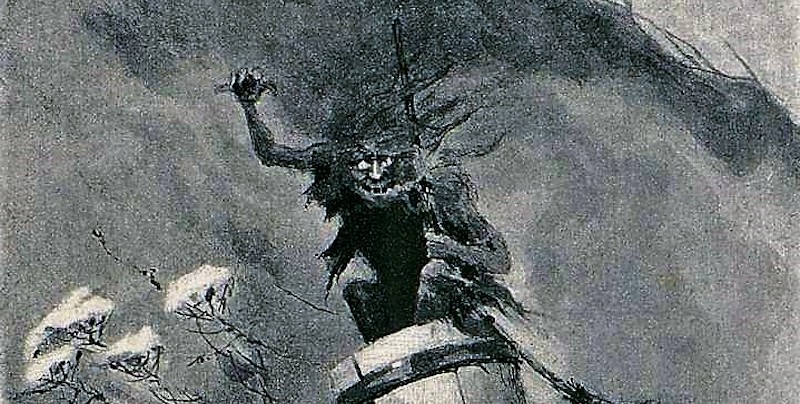 My wife and I live in Brooklyn; our daughter, our son-in-law, and our twin grandchildren (a boy and a girl) in Los Angeles. The distance limits our time together to a couple of visits a year. When the children were little, they would greet our arrival by throwing up their arms and cheering us like rock stars: “Grandpa! Grandma!”

We were their heroes for different reasons: she for filling the mythical template of “Grandma” with limitless warmth and pleasure, I mainly for my role as storyteller when they were put to bed.

One day, I introduced them to a Russian fairytale I remembered from my own childhood, about a witch of bizarre appearance and unpredictable character—sometimes sinister, sometimes benign—who is known as the Baba Yaga. I tempered her uncanny ambiguity. What remained was a creature of surreal mischief: neither evil nor good, but funny, and not to be feared. (I don’t believe in scaring children.)

My Baba Yaga lives deep in the woods in a hut that not only stands but hops around on a single chicken leg. Her nose is so long that it juts through her window. Birds come to perch on it and tell the Baba Yaga about far-away places to hop to, creatures in trouble, or maybe a monster to pacify with a magic spell.

The Baba Yaga was a tremendous hit. I think her sheer weirdness blew all other fairytale creatures out of the water. Night after night, I was required to tell Baba Yaga stories. I was soon at a loss to come up with new plots. I made the mistake—at least it seemed a mistake at first—of inviting the children to prompt me with ideas of their own: “Make it about Robin Hood!” “No, Cinderella!” Robin Hood or Cinderella alone would have been easy, but it had to be a Baba Yaga story involving them both. If I gave either new character too much airtime, the champion of the other would get bored or contentious. Every author is a jealous god, and the children were co-authors now. My ambition was to hold their attention from beginning to end and reward the three of us with the satisfying closure of a well-told story.

I believe that mature individuality resembles nothing so much as the state of a carefree child.

One of these I remember to this day. The story involved: Ali Baba, who was six years old and very wise, according to my grandson’s specifications; a fairy princess (that was my granddaughter’s chief requirement); Martin Luther King, Jr. (both children had learned about him in school); my granddaughter’s cloth alligator, a hand puppet who knew how to cure warts (she was a leftover from a previous story); a Love Bear who slept on my grandson’s bed and was called that because he or she was covered with hearts (the rhyming of warts and hearts turned out to be useful); and, of course, the Baba Yaga. The story went through surprising turns. Ali Baba led Martin Luther King into the forest. “I have something to show you,” I said, speaking for him. But what? There was Martin Luther King in the middle of the forest, surrounded by that weird cast of characters. My imagination came to a standstill. What was he doing there?

Passionately, my grandson chimed in: “I HAVE A DREAM!”

That provided me with an energetic pathway. But where would it lead? One character we hadn’t dealt with yet was the fairy princess, and then it was obvious: she was his dream, it was she he was looking for. It made perfect sense to the children that the King would be looking for a Princess. But where was she? She was nowhere to be seen. A search was conducted by all the animals. The Baba Yaga hopped around the forest and concluded that the fairy princess didn’t exist. Finally, an ancient beetle remembered that long, long ago, an evil sorcerer had turned the fairy princess into a witch all covered with warts. Who could that be? The Baba Yaga! No one was more surprised than the Baba Yaga herself.

Fortunately, the Love Bear was able to reverse part of the spell by the sheer force of love, restoring the witch’s youth. That left the disfiguring problem of warts. Those the alligator was able to remove. And then there was a wedding.

“That was a charming story at the time it was told,” says an inner censor, “but now you’re retelling it to an audience of adults, and there are a few problems. Little girls have been proffered the princess myth for too long, it does not serve them well; and the words that heralded MLK’s prophetic vision are not a proper vehicle for a joke.”

This voice means well. He or she—but it’s really a plural entity, isn’t it, a chorus?—they, then, want the good for everyone, and their counsel to me is meant to protect me from judgment. I sympathize with their concerns, agree with them in principle, but that doesn’t incline me to change the story. Why? Because no harm is done by its telling, and because there are things more important than principle. A sense of humor, for instance. Also, imagination. What happens to humor without imagination?

Sixty-two years ago, Jack Kerouac wrote a memorable sentence: “The woods are full of wardens.” This is as much the case now as it was then. Let us clear our woods of wardens. Let us clear away fences as well. What are they good for, except as markers of private and public property? We poets and writers are not just practitioners but custodians of the imagination. I think that is our duty, and no one else’s.

What does my Baba Yaga (mine as distinct from her uncanny prototype) have to do with this? A few things. She is not well behaved, for one. That was what made her so irresistible to the children. Every evening, the three of us entered those enchanted woods—we who dared. The risks to them, that something scary or terribly sad could happen, were mitigated by my care (and, I should add, by the blessing of peace in our country. May all children everywhere be spared an incursion of war as the master-narrator of their life story). And the children felt that security, which I gave them without assurances. Explicit assurances would have robbed their adventure of the necessary risk. It was I, the ringmaster of the nightly Baba Yaga show, who saw to it that danger and safety were provided in balanced measure.

“But art is not child’s play,” a new voice chimes in. This is not a voice of choral consensus. It is a single voice. In fact, it’s my own. To my surprise, I don’t agree. I’ll allow this much: no child could have painted like Qi Baishi  or composed Bach’s Goldberg Variations. Such mastery is the fruit of maturity, not just skill. But who can fail to see and hear a child at play in the late work of these great artists?

It came as a surprise to me recently when I learned that Nietzsche’s “Ubermensch,” the “Lighting out of the dark cloud, man,” is not introduced as a triumphant hero, but as a child—“An innocence, a forgetting, a new start, a playing, a wheel that rolls out of itself, a first movement, a sacred YES.” For Nietzsche, this state was attainable only through an apocalyptic rupture, a titanic break with the past. But it is not that remote or daunting a project. Indeed, as a project it may not be attainable. Ripeness is all. I believe that mature individuality resembles nothing so much as the state of a carefree child who is unconcerned with rules and convention. 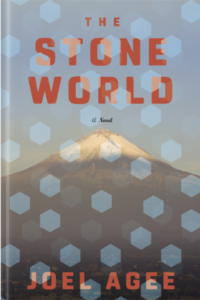 The Stone World by Joel Agee is available via Melville House.

Joel Agee is a writer and translator. He has won numerous awards for his translation work, including the Berlin Prize of the American Academy in Berlin; the Helen and Kurt Wolff Prize; and the ALTA National Translation Award, as well as fellowships form the Guggenheim Foundation and the National Endowment for the Arts. His essays have appeared in Harper's, The New Yorker, The Yale Review, and other magazines, and he is the author of two acclaimed memoirs: Twelve Years: An American Boyhood in East Germany and In the House of My Fear. He lives in Brooklyn, New York. 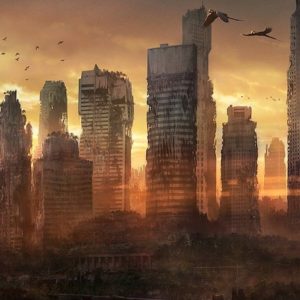 History has reappeared with a cathartic vengeance. War, inflation, a global pandemic, multiple refugee crises, the apocalyptical...
© LitHub
Back to top
Loading Comments...