TODAY:  In 1912, The RMS Titanic strikes an iceberg and begins to sink; onboard are mystery writer Jacques Futrelle, journalist and publisher William Thomas Stead, and bibliophile Harry Elkins Widener, as well as a copy of the Rubaiyat of Omar Khayyam in a jeweled binding.

Testing ourselves to death: why Barbara Ehrenreich is giving up on the endless pursuits of preventative medicine • Gregory Pardlo on form, his father, and not writing a book about race (and how to pretend you’ve read a book you haven’t) • Gay. Muslim. Refugee. Aleksandar Hemon tells the story of Kemalemir Frashto, and trying to make a life in Trump’s America • Surviving the ordinary: why we need memoirs of regular lives • Not so great after all? One hundred one-star Amazon reviews of The Great Gatsby • Jessica Friedmann on blood, birth, and the talismanic power of red lipstick • 5 writers, 7 questions, no wrong answers: Leslie Jamison, Sloane Crosley and more take the Lit Hub author questionnaire • What if the lefty hoaxers are right? William T. Vollmann investigates climate change denial and the end of the world as we know it • Madeline Miller on restoring power to the women of ancient myth • Dear Book Therapist: Rosalie Knecht has the literary prescription for someone who seems to have lost it all • Listen, grammar pedants, enough: the English is NOT LOGICAL • Madelaine Lucas takes a road trip to Texas to spend time with Sam Shepard’s notebooks • A look at Edward Gorey’s book covers for Kafka, Dickens, Conrad and more (and a peek inside his Massachusetts home, while we’re at it) • Michelle Dean on the problem with “speaking for women” and the abstractions of contemporary feminism

There Is Always Another Side: A look back at Jean Rhys’ postcolonial masterpiece, Wide Sargasso Sea • 5 Books Making News This Week: Greek Myths and Sharp Wits • This week in Secrets of the Book Critics: Kathleen Rooney on feminist espionage, cult horror novels, and wine shelf-talkers • Barbara Kingsolver on Richard Powers, Ron Charles on a novel about gun violence, and more Book Reviews You Need to Read This Week • From Circe to Selfie, Kentucky noir to Kubrickian Sci-Fi, it’s the Best Reviewed Books of the Week

Shelley Puhak’s portrait of a library, a murder, and shattered illusions • In Tehran, writing noir is a political act • A family of writers with a passion for 1970s conspiracy thrillers • Why we should all be reading gross crime fiction • An author’s long obsession with her tennis coach, a notorious predator • David Peace’s working class alternative histories make a claim for greatness • A literary tour through Venice, city of masks and mysteries • 10 great clerical sleuths: priests, rabbis, reverends, nuns, monks, and more

Michelle Dean: The Problem With "Speaking for Women" 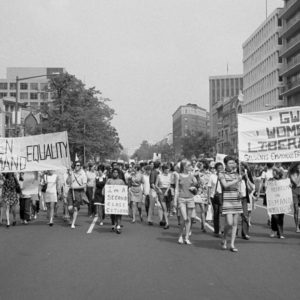 Michelle Dean: The Problem With "Speaking for Women"

I really love the opening lines of Simone de Beauvoir’s The Second Sex. “I hesitated a long time before writing a book...