Dear Book Therapist: How Do I Start Over?

Do you have a problem? Do you want a book to help you solve it? Book Therapist is Rosalie Knecht, LMSW, a licensed therapist and author of the novels Relief Map and Who is Vera Kelly? (Tin House, June 2018). She will be taking questions monthly for Lit Hub at booktherapy@lithub.com. You can also follow her on Twitter @rosalieknecht and Instagram @rosaliekn.

My husband moved out a month ago after nearly a year of seeing someone else. Our daughter is now five months old. We spent my life savings on buying a house last spring that I’m going to have to sell now for a loss. I’m trying to figure out how to build a new, happy life so that I can be a good mother to my amazing daughter, but it has been hard to find that answer when my life has been so completely upended in one year.

Do you have any book recommendations?

I hope you’re surrounded by people who are outraged on your behalf. You’re at a moment in your life when you need a large amount of concrete, material support, and I hope you have no inhibitions whatsoever about asking for it, and plenty of family and friends to give it.

What strikes me about your letter is how straightforward it is: there’s no emotional language here about the end of your marriage at all—only about your daughter and what you want for the future. I wonder if it’s still difficult to go near your feelings on the subject of your husband and marriage, if they’re still so radioactive that you cannot approach the containment chamber. It’s worth noting that this is often the way grief works, and I wonder if this feels more like a death than a breakup. You had a future planned; then it vanished. You had a particular idea of yourself and who you were and where you were going. And then it was gone.

I’m not going to recommend any breakup novels, because I think the last thing you need is to read about other people being hurt, disappointed, or betrayed by each other. Instead, I’m recommending Helen Macdonald’s H is for Hawk, which is about having your life so painfully scoured out by a loss that you retreat from the entire human project. You could use a little retreat, if only by proxy, since your baby is no doubt keeping you very much tethered to the here-and-now. Macdonald’s father died unexpectedly, and in the disorientation of her grief she bought and learned to fly a goshawk. Macdonald was made feral by her loss, and felt the anger of it deeply, in a way that drove her toward open country and wildlife. You may feel (and you’re right!) that it’s not safe or practical for you to go feral or be consumed by rage—you have somebody to take care of. I admire your strength in resisting those impulses, in not even eviscerating your husband’s character in an anonymous letter to an advice columnist! But reading this book might help you approach those fierce, bloody feelings, with Macdonald’s company.

The goshawk is a giant, complex, murderous bird, and flying it requires a person to understand it well enough to love it, and then let it fly away and hope it comes back. As Macdonald says, flying a hawk “is not an easy thing to do when you’ve lost trust in the world, and your heart is turned to dust.” But she does it over and over again, while she starts to rebuild her life. You can’t really live and engage with other people and the world without trusting that the floor won’t drop out from under you, and yet sometimes, it does. You have to practice taking small steps that require trust, over and over again, while you find the path forward.

P.S. Your ex may have many fine qualities but cheating on a pregnant partner is the lowest thing that a human being can do without facing charges, and I would personally like to fight him.

I’m currently in my second semester of a Master’s program in Women’s Studies and my 29th year of life. I’ve so far spent my adulthood trying to find an occupation that pays the bills without shaving off my sharp corners, but also serves to make me feel like I’m working to make the world just a tiny bit better (hence my choice of grad programs). I’ve tried a lot of things; I’ve been a teacher and a baker, worked at a book press and in more restaurants that I can count, and been an assistant editor for an expat website based in Ecuador, where I was living at the time. All of this, and yet everything makes me feel so confined, so limited, that barely a year passes before I’m off to find something else. I have never been able to imagine a future in any of the professions I’ve chosen.

Now I’m getting this degree and it’s taught me so many things, but not what to do. Except. I think I’m running away from the fact that a creative life, one in which creativity is the focus even if I need some menial job to get by, is the only one that might fit. Living a life predicated on my own creativity frightens me to death. But so does the idea that I might eventually give up and resign myself to a life of putting my head down and performing a job so that I can have fun on the weekends. Am I just refusing to grow up? Or am I refusing to grow into the only space whose dimensions actually fit?

–Running Out of Options

I used to have this problem and I actually solved it; while that doesn’t mean that I can solve it for you (we’re all different people! Our terms are different!) it does mean that I have A LOT OF THOUGHTS about it.

The problem is the framing. You’re not going to successfully choose between having a regular job and making art. This is because you need food to live and a house to live in, and no career in the arts is going to provide those things for at least (AT LEAST) the first decade, if it ever does at all.

“Of course,” you’re saying. “Don’t patronize me. I know that. So what I’ll do is get some day job to pay the bills. Something undemanding, so that I have my mind free for the things I really care about.”

I’m here to tell you something: the day job is a mug’s game. What you want is a job that you really care about. Yes, that’s correct: I’m suggesting that you should have both an art practice that you are passionate about AND an actual, regular, out-in-the-world job that you also deeply care about. This was the only solution that worked for me, because going to a job I didn’t care about was actually profoundly enervating and depressing. In fact, I was too enervated and depressed to work on my art in my free time. The amount of time you need to spend on something to earn a living at it is simply too much time to spend on something that doesn’t matter to you. You will feel dead. You will feel like you’ve been cryogenically frozen. You’ll think it’s because you should be working on your art instead, but it will actually be because you need a better job.

R.O.O., you couldn’t commit to any of those past jobs, even the ones that were interesting, even the ones that felt like they mattered, because you thought that committing to them meant closing off your creative life. But it doesn’t—it just means letting go of a fantasy version of your creative life, in which art is all you do. Doing something in addition to your creative work makes your world bigger and more interesting (and gives you health insurance). So do both! Get a job in maternal health policy, or whatever it is that interests you, and also launch that enormous photography project, or whatever your creative practice is. I know, that sounds miserable and you think you’ll be exhausted. But it will be okay! Just make sure you get enough sleep and food, because you will burn out fast otherwise. That’s actually my baseline advice to you: get at least seven hours of sleep per night, and eat a healthy diet, and just do all of it.

Ask yourself a question: if you had no inclination toward art at all, what would you be doing for a living? Do that. And make art too. The only way to have enough energy for your life is to enjoy what you’re doing.

And read P.D. James’s Shroud for a Nightingale. James was a civil servant all her life, even after becoming wildly successful as a writer of mysteries. Her pleasure both in her work as a writer and in her work with the National Health Service, which provided much of the medical and bureaucratic detail she uses in the setting for the novel, are on full display here. It’s a classic cozy British mystery (I think any murder mystery that focuses so minutely on the victim’s final cup of tea has to be classified as a cozy) and it’s fun, which is important for a grad student already drowning in reading. Godspeed. 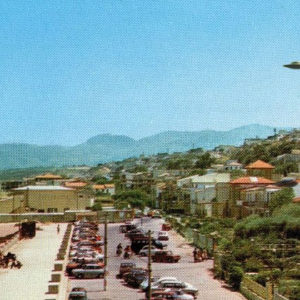 Martians? Really? Yes, really. Once upon a time, you see, there was a poem called “A Martian Sends a Postcard Home” (1979)...
© LitHub
Back to top
Loading Comments...