The Art of the Hand-Sell: booksellers from nine indies rave about their favorite reads • Sabbath’s Theater, Kidnapped, The Death and Life of Great American Cities, and more rapid-fire book recs from Phillip Lopate • White Oleander, Beloved, A Home at the End of the World, and more rapid-fire book recs from Chelsea Bieker • New titles by Haruki Murakami, Jeff VanderMeer, Rachel Kushner, and Brandi Carlile all feature among the Best Reviewed Books of the Week

Dario Diofebi with a brief moral history of online poker • Legendary critic Marilyn Stasio on a lifetime of book reviews • Neuroscientist and novelist Erik Hoel thinks murder mysteries are a lot like science • Flynn Berry on the hidden history of women and the IRA • Edward Brooke-Hitching on the most indecipherable coded text ever discovered • Adele Parks with characters so bad, they’re great • Jane Healey honors the pioneering women spies of the OSS • Jennifer McMahon with scary reads for scary times • Dan Stout on striking a balance between world-building and action • Richard O’Rawe, a former bank robber for the IRA, on writing a heist novel 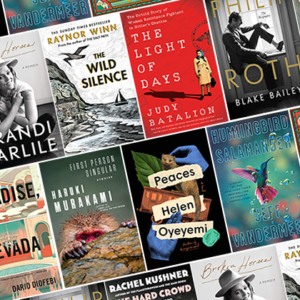