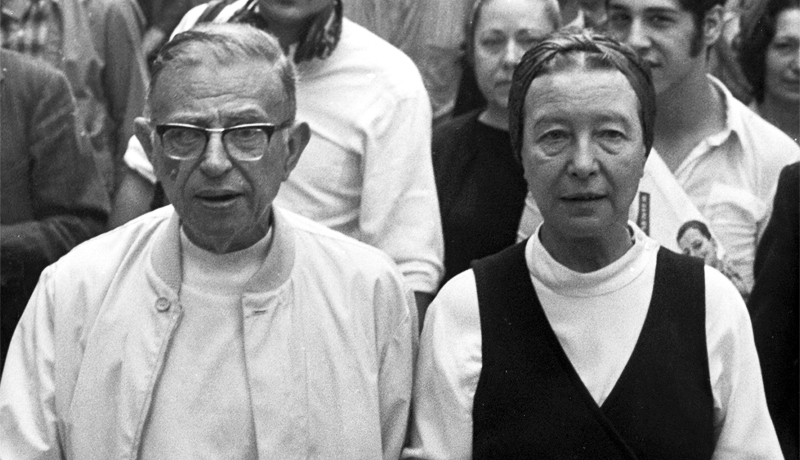 Dana Spiotta, Innocents and Others

Spiotta’s fourth novel launches with an early New York Times Magazine profile by Susan Burton, who writes that Spiotta “writes radiant, concentrated books that, as she has put it, consider ‘the way things external to us shape us: money, technology, art, place, history.’”

“Without a doubt, Spiotta is a novelist of ideas, but she’s extraordinary in her ability to shrug off the refrigerated grandiosity that typically infects such writers,” writes Laura Miller (Slate).

You can see this in that first chapter of Innocents and Others, which is both an exercise in the significance of form and an amusing and astute comedy of contemporary online manners. The main text belongs to that quintessential genre of today’s Internet: the vaguely titillating personal essay by a woman who describes an unusual and heretofore private sexual or romantic experience. Meadow Mori, a 50ish experimental filmmaker, recounts the affair she had when just out of high school with a much older man, who, although unnamed, is clearly meant to be Orson Welles. The chapter closes with a string of comments attached to the story, the usual salvos of peanut-gallery indignation, finger-wagging, drive-by sniping, self-promotion, spam, cluelessness, rumor-mongering, and resentment…

“It’s difficult not to descend into hyperbole talking about Spiotta’s work,” concludes Mark Haskell Smith (Los Angeles Times). “She writes with a breezy precision and genuine wit ….And it’s rare to find a novel that is so much fun and, at the same time, seeks emotional truth with such intellectual rigor; it adds up to an original and strangely moving book.”

“The story’s real heart,” writes Ron Charles (Washington Post), “is the tenacious relationship between Meadow and Carrie, the serious documentarian and the Hollywood hitmaker. Working in the tight space of this relatively slim novel, Spiotta explores the remarkable species of sisterhood that survives jealousy and disappointment and even years of neglect.”

Ironically, the product of all this single-author sleight-of-hand reads like a shockingly smooth collaboration, as if Meadow and Carrie—who, with their opposing aesthetic approaches, could never have completed a film together—have somehow joined forces in a novel, the only art form capacious enough yet interior enough to contain them. Innocents and Others is a combo-deal of a novel that mixes the silliness of a popcorn romp with the intellectual seriousness of a one-camera talking-head commentary. Highbrow and lowbrow have cohabitated before, of course, but rarely with this ease or this empathy. Spiotta—like Didion, DeLillo, Nicholson Baker and Bret Easton Ellis—understands that the interaction between her art form and the popular isn’t an agony but an amity: a peopled life.

Boris Kachka (New York) calls Spiotta’s latest “both lean and capacious,” and “a sort of mixed-media meditation on alienation, friendship, technology, and the senses of hearing and sight.”

Laing’s The Trip to Echo Spring was a collage of memoir, biography and cultural criticism about why writers drink. Her new book continues her original take on narrative nonfiction, describing time spent in New York City after a breakup while exploring the lives and work of artistic masters like Edward Hopper, whose work defines loneliness.

“Laing is an astute and consistently surprising culture critic—one who deeply identifies with her subjects’ vulnerabilities,” writes Maureen Corrigan (NPR). “Laing says her own extended experience of raw loneliness made her hyper-receptive to visual images of loneliness and that studying those images made her want to learn more about the isolated souls who made them by, as Adrienne Rich put it, diving into the wreck of artifacts like Andy Warhol’s time capsules, David Wojnarowicz’s ‘Visual Aids’ photographs and scenes from Alfred Hitchcock’s ultimate tribute to urban voyeurism ‘Rear Window.’ The Lonely City is an odd and uncomfortable book—not consoling, but always provocative. And like so many of its weird solitary subjects, it’s absolutely one-of-a-kind.”

“Laing is always circling back toward a piercingly relevant observation,” points out Laura Miller (Slate). “And, oh, those observations! ‘There is a gentrification that is happening to cities,’ she writes in her final chapter, ‘and there is a gentrification that is happening to the emotions, too, with a similarly homogenizing, whitening, deadening effect.’ She compares the transformation of Times Square—its shift from a seedy temple district for humanity’s most unruly desires into a site of scrubbed Disney ‘fun’—to the careful grooming and curating of the Internet’s ‘kingdom of self-portraiture.’ What’s been excised in both cases is the awkward and the homely, the oddball and the failing—in short, all acknowledgement of our thwarted, shamefaced cravings for connection and intimacy.”

Hannah Gregory (Financial Times) writes, “Where society’s structures exclude her characters, Laing sides with them: her slight foreignness as a Brit within American English, and the daily mishearing of her coffee order, segue into Andy Warhol’s shaky grasp of his second language (he came from a Slovakian family) and the lack of linguistic home felt by first-generation immigrants. If ‘speech is by no means a straightforward route to connection,’ it is a relief that words written with such tender observation can be.”

The Nigerian-born Oyeyemi, raised in the UK, is celebrated for her novels, which have won the Somerset Maugham award, a Hurston/Wright Legacy Award, and put her on Granta’s Best Young British Novelists lists. Her first story collection intrigues critics.

“The nine stories range from the serious to the ironic, from the humorous to the darkly comedic,” Hope Wabuke (The Root) explains. “…but all revolve around themes of ownership, individual agency and boundaries; or, in other words, around the titular idea that ‘what is not yours is not yours.’”

Amy Gentry (Chicago Tribune) points out that Oyeyemi spent only “one semester in an M.F.A. program before bolting—perhaps wisely intuiting that her writing was better off with its weirdness fully intact.” Her stories, Gentry writes, “feel idiosyncratic in a way that is hard to imagine surviving a workshop setting. Casual and accessible at the sentence level, they are not so much experimental as deeply comfortable with the pre-narrative and proto-narrative impulses at the heart of storytelling. Oyeyemi’s tendency to nest stories together, her willingness to let anecdotes and digressions swell until they take over the story, hearkens back to older story structures in which the hierarchies of narrative are less important than their ongoingness—think One Thousand and One Nights or The Decameron.”

Morgan Jerkins (The New Yorker) focuses on the last story in the collection, “if a book is locked there’s probably a good reason for that don’t you think,” and the significance of diaries in the lives of black women writers.

The title is lowercase, and there is no question mark, perhaps to signal to the reader that the remark in the title is not looking for a response. The protagonist’s name is Eva; early on, the narrator informs the reader that Eva is black. At the data-analysis company where Eva works, her reticence draws in her co-workers, whose races the reader never learns….Eva’s colleagues eventually turn on her and deem her uppity and pretentious; one day, someone in the office steals the diary. We never learn who.

The story, writes Jerkins, illustrates “the necessity and the power of such private, written confessions….For a black woman in a white world, a conversation with the self is crucial: for when she walks through that often-unwelcoming world she is subjected to confining perceptions of who she might be. When that world insists on racist and narrow paradigms, the diary gives these women a chance to scratch out and rewrite such definitions.”

“For faithful readers,” writes Dana de Greff (Miami Herald), “being granted access to these inventive and ambitious stories is a bit like receiving a gift, one full of strange and private wonders.”

The full effect of What Is Not Yours Is Not Yours is almost uncanny. So powerful is the storytelling, there were points in my reading where I experienced a uniquely immersive experience, as if I had entered wholly into Oyeyemi’s world. The most mundane things—the sound of an opening door, the sight of a key, the familiarity of passing strangers echoed what I was reading in the book and so they took on a sudden clarity and a keen significance. It took a long time for that feeling to fade, and I was sorry when it did.

Dutton, who is co-founder, with her husband Martin Riker, of Dorothy, a publishing project, is fascinated by “female lives that seem to be constrained in some way,” she tells Michele Filgate. Her third novel focuses on Margaret Cavendish, who Virginia Woolf described in A Room of One’s Own: “What a vision of loneliness and riot the thought of Margaret Cavendish brings to mind! as if some giant cucumber had spread itself over all the roses and carnations in the garden and choked them to death.”

Natalie Helberg (Numero Cinq) finds Margaret the First reminiscent of Virginia Woolf’s The Waves. “…Dutton’s book unfurls in prose which is arrestingly poetic; it concentrates on the small moments, emotions, and sensuous details which make up Margaret’s life, though without forgetting about the larger, less fleeting events which might be termed her life’s frame. It is a work in which colourful linguistic molecules reign, a work whose language is perhaps as excessive and stunning as Lady Cavendish’s own wardrobe was said to be.”

“Dutton’s anti-historical historical novel about Margaret Cavendish, Duchess of Newcastle-upon-Tyne, writer of poetry and philosophy and science fiction, has one of the most enticing conceits of any book in 2016,” writes Jonathon Sturgeon (Flavorwire).

Sarah Bakewell, At the Existentialist Café

After reading Sartre’s Nausea at sixteen, Bakewell decided to study philosophy, which led to How to Live: A Life of Montaigne, which won a National Book Critics Circle award in biography, and her unconventional new book.

Janet Maslin (New York Times) calls At the Existentialist Café “a bracingly fresh look at once-antiquated ideas and the milieu in which they flourished.” She finds Bakewell’s approach “enticing and unusual: She is not an omniscient author acting as critic, biographer or tour guide. As someone who came back to this material by rereading it later in life, she has made her responses part of the story.”

“Cannily,” concludes Karen Long (Los Angeles Times). “she marries the life of the mind with the contradictory, ornery, embodied individuals carrying these ideas around even as they fight and flirt, circle one another and fall out. It makes the pages fly.”

“One of Bakewell’s narrative gifts is to place existentialism and its sister school of thought on subjective experience, phenomenology, in historical context,” notes Howard Akler (Macleans). “Both philosophies ﬂowered in the rubble of the 20th century. After the large-scale devastation of war, depression, another war and the bomb, is it any wonder these thinkers yearned for some sense of individual purpose?”