TODAY: In 1930, an early literary character licensing agreement is signed by A. A. Milne, granting Stephen Slesinger U.S. and Canadian merchandising rights to the Winnie-the-Pooh works.

Eight ways of looking at Samuel Beckett: J.M. Coetzee imagines Kafka the Professor, and Beckett on a South African beach • How to dig a hole: on the fine art of digging (and other bits of very old wisdom) • One man’s escape from North Korea: Masaji Ishikawa flees totalitarianism under the cover of night • Ursula K. Le Guin does not like being famous (but still has a lot of fun making up stories) • We were mothers, daughters, and lovers: Danielle Jackson digs into

the groundbreaking art of Kathleen Collins • Freak, geek, or cool kid? Sam Graham-Felsen on navigating the tribes of high school • When women went blue: Eileen Pollack on the courage of groundbreaking female stand-ups, and the dirty, dirty jokes they told so well •  The best movies start as books: a look ahead at some much anticipated adaptations in 2018 • Sara Paretsky got tired of the vamp or victim portrayal of women in crime fiction, so she went ahead and created the great V.I. Warshawski •   Margaret Atwood in conversation with Andrew O’Hagan and John Freeman • The killer next door: Imagining the dark suburbs of Pittsburgh • 15 books you should read in January • They tried to ban Fahrenheit 451 and replace it with… my book. David Williams on receiving the worst kind of endorsement from a Florida woman • James Han Mattson tries to think like a 14-year-old • Chris Yates reckons with a self-imposed deadline

Everything You Need to Know About Michael Wolff's Fire and Fury 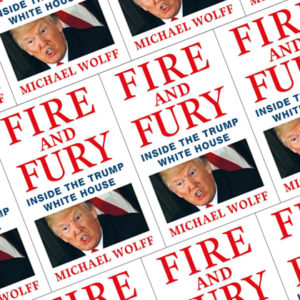 Everything You Need to Know About Michael Wolff's Fire and Fury

If you've been anywhere near a screen these past few days, you've probably heard something about the book that's sending...
© LitHub
Back to top