“I can’t forgive his sins. But some of his stories remained in me, as they did in many others.” Gabrielle Bellot on the enigma of V.S. Naipaul • In the aftermath of hate and heroism: survivors of the Portland train knife attack tell their story • Space Force! In which Nathan Englander volunteers to lead the sixth branch of the United States Armed Forces • What happens when you’re dubbed the “funniest woman in America” and you’re pretty sure you aren’t? • Stepping into the boxing ring as a transgender man: Thomas Page McBee prepares for one more fight • A brief history of women mountaineers: Susan Froderberg on breaking the last ceiling • Lottery tickets, cigarettes, a VHS player, the book with the blue cover… Kristen Arnett offers an incomplete list of all things library patrons have asked her for • Nigel Poor, host of Ear Hustle, tells Will Schwalbe what it’s like to record a podcast from San Quentin prison • Nobody grows up wanting to be a missile-maker: Karen Piper on how war put food on her family’s table • On the slyly subversive writing of E.M. Forster, who knew that happy endings don’t require weddings • The trouble with designing a book when its author is in prison • This could be the last, best place on the internet: visiting the Encyclopedia of Science Fiction • Is atheism the last unforgivable sin of American politics? (Because just about every other transgression seems perfectly fine) • From Orwell to Tawada, 11 books (for adults) that feature talking animals • Laura June recommends seven novels that capture the pain and chaos of addiction • Anne Boyd Rioux wonders: Why don’t more boys read Little Women?

Which is rated higher, the movie or the novel? 17 Books Vs. Their 2018 Adaptations • His Favorites author Kate Walbert spoke to Jane CIabatari about Five Novels to Read Over a Weekend • This week in Secrets of the Book Critics, Chelsea Leu on Madame Bovary, fact-checking writers, and giving comic novels their due • Keith Gessen’s Russia, Nico Walker’s road to perdition, Yanis Varoufakis on a decade of financial crises, and more Book Reviews You Need to Read This Week • A Booker Prize-winner, an incarcerated debut novelist’s debut, and a radical new theory of evolution all feature among our Best Reviewed Books of the Week

Crime and the ‘City’ visits the Scottish Highlands and Islands and finds a fictional landscape with a high body count and some dramatic, possibly lethal, vistas • Kidnappings, cold cases, and comedy: 5 debut crime novels to read this August • Tori Telfer profiles Megan and Laura: probation officers, true crime addicts and best friends • Con artists, impostors, serial killers, and gangsters galore: a roundup of August’s best true crime releases • Al Capone, gangster publicist: how Capone charmed journalists into a more sympathetic portrayal of the criminal world • A look at the life and legacy of Josephine Tey, one of Golden Age mystery’s most influential and elusive figures • Samurai bureaucracy and iron-clad codes of honor: Susan Spann on crime and punishment in Shogun Era Japan • Hollywood veteran and first time novelist Howard Michael Gould shines a spotlight on 6 under-appreciated crime comedies • Comic book legend Paul Levitz visits the ghosts of New York and looks at why the city has such a complex relationship with the violent past • Adam Hamdy looks at 12 classic techno-thrillers that explore ethics of innovation • Our podcast correspondent rounds up six podcasts that tell the stories of violent children, without sensationalizing their subject matter 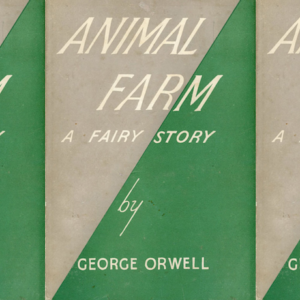 Your summer Friday feature: From Orwell to Tawada, 11 books (for adults) that feature talking animals. | Lit Hub ...
© LitHub
Back to top