VIA The New Press

"I had already been through so much. I just wanted my old life back."

On May 26, 2017, Destinee Mangum, 16, and Walia Mohamed, 17, were aboard a MAX Light Rail train in Portland, Oregon, when a known white supremacist, Jeremy Joseph Christian, fatally stabbed two people, Ricky John Best and Taliesin Myrddin Namkai-Meche, and injured a third, Micah David-Cole Fletcher. Christian had attempted to assault people at a white supremacist “March for Free Speech” rally one month prior to the incident, and he insulted and threw a bottle at a black passenger on another MAX train one day before the fatal stabbing. This is the first time Destinee and Walia have spoken together publicly about what happened that fateful day.

Destinee Mangum: We weren’t even supposed to be on the train that day. We got lost. We were on the train in the afternoon, when Christian got on at Lloyd Center. It’s a main stop in central Portland. For like eight minutes, he just yelled at us: “You’re nothing”; “Kill yourself”; “Get out of this country”; “Burn.”

Walia Mohamed: “Muslims should die.” “Go back to Saudi Arabia.” As soon as he got on the train, he started yelling at us. It’s like our faces were a trigger. I felt like he was attacking me because I was wearing a hijab; Destinee was wearing something on her head, too. He was yelling stuff about Muslims and Christians as well. Plus, we’re both black. He was racist and didn’t like that either.

DM: While he yelled, he was staring right at us and holding some book. He had this look in his eyes like he really didn’t care. His eyes were blank.

WM: It was terrifying. And he was a big guy. We feared for our lives. I remember this African American guy standing right in front of us. He did nothing.

WM: I mean, he said in a low voice to Christian, “Could you calm down?” I wish he had done more. After Christian got louder and more aggressive, I got really scared. That’s when we moved to the back of the train.

DM: I also remember that when Christian was yelling, there was another white guy vouching for him. He was standing right behind him and saying yes to everything Christian was saying.

WM: He was agreeing with him, just nodding his head.

DM: Christian kept yelling at us, even when we were in the back. That’s when Ricky, Taliesin, and Micah stepped in. They were all on the train together and spoke up.

WM: They didn’t even know each other. They just wanted to help. I don’t remember what happened next.

WM: When he started stabbing, we ran as fast as we could.

The train had already stopped, but it should have stopped earlier.

DM: The conductor should have stopped the train much earlier. This didn’t happen in two seconds or even a few minutes. It took a long time for this to happen. Before Ricky, Taliesin, and Micah intervened, nobody said nothing. Nobody did anything. There’s an emergency button. Nobody pushed it.

WM: I still don’t know why nobody pushed the emergency button. It’s like people froze.

DM: When Christian ran off, we ran in the opposite direction. I called my mom. I panicked. I was crying. “Mom, Mom, Mom, Mom.”

I told her, “Somebody got stabbed on the MAX. I don’t know what’s going on. Can you just come get me?”

WM: She knew something terrible had happened . . .

DM: I’ve always liked Portland, but it’s uncomfortable now because I feel like everyone knows me. I don’t know them, but they know me. A lot of people come up to me and say, “Oh my God. You’re the girl from the MAX. Tell me about what happened.”

WM: It became a national story and it was too much for me.

I didn’t talk to anyone because I didn’t like the attention. I hid because I didn’t want the cameras on me. I had already been through so much. I just wanted my old life back. I also liked Portland growing up, but I don’t feel comfortable here anymore. Everywhere I go, I fear for my safety. I’m a Somali immigrant and I decided to take off my hijab a few months ago because I don’t feel safe. I feel like I’m going to get attacked again. Before the incident on the MAX, I had never been attacked. Not because of my hijab. Not for any reason. I’m still Muslim, but I just don’t follow certain traditions because I feel unsafe. It’s really hard for me right now . . .

“I’m a Somali immigrant and I decided to take off my hijab a few months ago because I don’t feel safe.”

DM: I’ve received calls and messages on Facebook and Instagram, saying things like, “I’m going to hunt you down and kill you. You don’t deserve to be alive.” Sometimes they call me “nigger.” I just block them and try to forget about it. But what if they do come after me? A lot of people have been getting away with a lot of stuff. I told the police about the threats around the time of the grand jury, and they told me it would be okay. They said the aggressors were hiding behind screens and wouldn’t do anything. After I insisted, they said they would watch my house, but I don’t think they ever watched it. They said someone was going to drive by or check the perimeter a few times a day, but I didn’t see anyone. I was threatened online just three weeks ago.

As of now, we’ve been quiet about everything. We haven’t talked about it much, not even with each other. I feel like at some point Walia and I should talk about it more and go to therapy together. Post-traumatic stress disorder is real. I don’t want to wait and be scarred for life. I also don’t want that for Walia. I want us to do it together, not separately. We’ve tried to forget about it. But we can’t forget about it. We’re reminded of it every day.

WM: We feel it. People remind us. Sometimes I just space out and think about it. It comes out of nowhere. It’s everywhere.

DM: Or you see images. It’s hard to ride past the scene. I haven’t been back there since it happened. I don’t even like passing the scene or seeing the MAX. I don’t ride the train anymore.

WM: I don’t ride the train anymore, either.

WM: I feel like it’s never going to go away. It’s always going to stay with us. No matter how old we get.

DM: No matter where we go. Walia’s my sister and my best friend.

WM: She’ll always be my sister. No matter what. She’s always going to be my family. 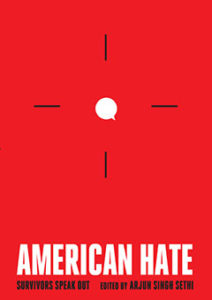 Arjun Singh Sethi is a community activist, civil rights lawyer, writer, and law professor based in Washington, DC. He works closely with Muslim, Arab, South Asian, and Sikh communities and advocates for racial justice, equity, and social change at both the local and the national levels. His writing has appeared in CNN Opinion, The Guardian, Politico magazine, USA Today, and the Washington Post, and he is featured regularly on national radio and television. He holds faculty appointments at Georgetown University Law Center and Vanderbilt University Law School, and presently co-chairs the American Bar Association’s National Committee on Homeland Security, Terrorism, and Treatment of Enemy Combatants. He is the editor of American Hate: Survivors Speak Out (The New Press). 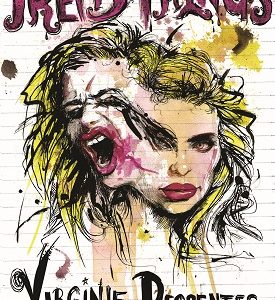 Heat, and no matter what she wears, it’s always too much. Every Saturday, the chaos on the street reaches extravagant...
© LitHub
Back to top
Loading Comments...