In Which I, Nathan Englander, Offer Myself Up for Space Force

“I’m Just the Kind of Unqualified Candidate This President Loves.”

American leaders really did once pride themselves on enterprise and invention. And yet now—day in, day out—you read reports of devolution in the U.S. on every conceivable government-run front. It really seems like the singular goal of our current administration is not to meet any goals, that it prizes regress as the best kind of progress, plotting a route toward the future that’s aimed at the darkest parts of our past.

In a fully Orwellian, dystopian manner, our Secretary of Education appears to be anti-public education. According to the Washington Post, our Secretary of Housing and Urban Development recently proposed “tripling rent for the poorest households.” The Head of the Environmental Protection Agency works to roll back environmental protections. And on and on it goes, everyone busy trying to undermine the very systems of which they’ve been put in charge.

In the spirit of backsliding and decline, the President heralds the brave new age of coal power! In an absolute embrace of low-tech, he plans to secure our massive southern border with a wall! Cutting edge technology borrowed from the ancients (while ignoring the fact that pretty much every defensive wall that’s ever gone up has been breached, climbed over, crawled-under, Trojan-horsed, Ark-of-the-Covenanted, hang-glided or knocked down).

This race toward the bottom can feel a bit hopeless for those of us who think betterment is, well, better. So, I’m here to share some good news that you may have missed among the recent stories about government cruelty toward the most vulnerable, the Supreme Court’s depressing decisions, and a hundred other things that crush the soul. A brave new day is upon us. The president has announced his intention to form a Space Force!

It’s like an Air Force but for outer space. Or a Navy, but, you know, instead of water, space.

It makes perfect sense. How else would a president who loves conflict choose to innovate? What’s left but space for a man who fights with everyone—even Canada! And over milk!

“I’m really deficient in all the right ways. I have no background in aeronautics or engineering or basic math. The very thought of space travel terrifies me.”

Upon reflection, it’s sort of surprising that it took this long. I mean, how is it that we have no option to declare war in heaven?

And if this sounds maybe like an excitable guy spitballing ideas, know that it wasn’t posed as a concept. He called for it to be made into a sixth branch of the U.S. armed forces—for real. A force that will be, to quote the president, “separate but equal” to the others. (Of course, “separate but equal” is the exact phrase used to justify racial segregation in American schools. When intolerance shapes so many official positions, how could it not get tacked onto space?)

Now, this is obviously a very tall order, a hugely expensive, hugely complicated, vision to pull off. And you may be wondering what the Science Advisor to the President thinks. But the president hasn’t appointed one—the post goes unfilled.

I’ll turn instead to the new administrator of the National Aeronautics and Space Administration for his expert opinion. Just kidding, he isn’t even a scientist.

So, I guess I’ll just weigh in personally and say that I’m sold on the idea! As soon as the president mentioned taming “new frontiers” I got behind the plan. “Frontiers” is the same word they use the beginning of every Star Trek episode, which is the spaciest of space shows. Very popular!

The president shared part of his motivation, saying that it’s great, “… not only in terms of jobs and everything else; it’s great for the psyche of our country.”

That, for me, is the real core of it. Because, I can tell you, I was near peak despair, and now my psyche is feeling super because—Space Force. It’s newfangled. Better than coal. Better than a border wall. A proposal like this helped me pump out some of the dread and fill that void up with patriotism. So much so that I’d like to announce right here—if it’s not too bold—that I’m willing to lead Space Force myself.

I’m really deficient in all the right ways—lacking everything the powers that be could dream of in a candidate. I have no background in aeronautics or engineering or basic math. The very thought of space travel terrifies me. It just sounds so claustrophobic and lonely to be stuck “sitting in a tin can, far above the world,” to quote Bowie. I’ve never had a real job or managed anything beyond my own anxiety. And, since militarized space dominance will either prove to be a colossal waste of money, or spark some nightmarish global escalation toward space war, I can promise that I’d really try my darnedest to dismantle the very thing I’d logically be expected to build—the number one criteria for a job.

Simply, if the administration is looking for the kind of disastrous, negligent mismatch they’ve stuck in so many other critical positions, then who better to lead Space Force than me? Also, I already have a really good idea in case, you know, real aliens show up.

I think the Commander in Chief will like it.

Nathan Englander is the author of the novels The Ministry of Special Cases, Dinner at the Center of the Earth, and the story collections For the Relief of Unbearable Urges and What We Talk About When We Talk About Anne Frank (winner of the Frank O'Connor International Short Story Award and finalist for the Pulitzer Prize). Englander’s latest novel, Kaddish.com, is out now.

Buddy, the Library Isn't a 7-Eleven 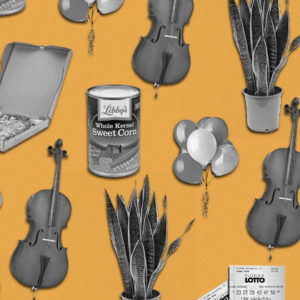 Buddy, the Library Isn't a 7-Eleven

Today someone handed me a Costco card. For what purpose? To check out books, of course! This is the fourth time in my illustrious...
© LitHub
Back to top