What If You Win a Comedy Award But Don’t Think You’re Funny?

Julie Schumacher, "Funniest Woman in America", on What People Expect of Humor

In 2015 my hometown newspaper, the Minneapolis Star-Tribune, ran a headline describing me as the “Funniest Woman in America.” My husband tried not to look astonished. Rather than “America,” had the editor meant to refer to Saint Paul? Or perhaps to our block—discounting a few of our humorous neighbors? But no, there it was, in print. “Well, that’s probably news to Tina Fey and Amy Schumer,” my husband said.

The reason for the headline: I had won the Thurber Prize for American Humor—for a novel called Dear Committee Members. I am still the only woman to have won a Thurber. My novel’s protagonist, Jason Fitger, an irascible loudmouth English professor, is many things I am not. For example, he’s funny. I can’t tell or remember a joke; but having won a prize for humor, I have become a person about whom other people have certain comedic expectations.

There are a number of problems associated with people thinking that you will be funny:

1)
Once they discover that you are not, in fact, a funny person, you will have to deal with their disappointment.
In the wake of the “funniest woman in America” designation, a news photographer arrived at my house carrying a camera and a plastic bag containing a rubber chicken, a red foam clown nose, and an oversized polka-dot bow-tie. I peered into the bag for a long moment. “We thought. . .

or, I guess the editor thought that you might. . .” the photographer said. I put the clown nose on my index finger. I think we both felt depressed.

2)
You will experience feelings of mistaken identity.
On my way back home to Minnesota after receiving the prize in New York, I tucked the lovely glass trophy (in a square black box) into my carry-on. The carry-on beeped when I was on my way through security. A TSA agent pulled me aside: could he open my suitcase? I hoped I had folded my pajamas. Soon the carry-on yawned in front of us on a metal table. “Ma’am?” The TSA agent snapped the wrist of his latex glove. “What’s in that box?” I reached for the cardboard lid protecting the trophy. “STEP AWAY FROM THE BOX,” the agent said. I distanced myself from my belongings and began to explain. The agent cautiously lifted the black cardboard lid. “Oh. A comedy award,” he said. A second TSA official had decided to join us. They both turned toward me, curiosity lighting their faces. “So: you do stand-up?  And you just finished a show in New York?”

3)
Others will solicit your advice about how to be funny.
I’m not a cut-up or a punster; I don’t do improv or karaoke. At live comedy shows, I sit in the back, far from the bachelorette parties—women bedecked in penile jewelry and headgear—and try not to engage. I can’t stand laugh tracks, and I don’t watch TV. (It got too complicated, what with the multiple remotes, so I gave it up.) My idea of funny is Jane Austen, especially Pride and Prejudice. “Read a lot of Jane Austen,” I want to say, when someone asks, “and maybe then you’ll be funny.”

“My novel’s protagonist, Jason Fitger, an irascible loudmouth English professor, is many things I am not. For example, he’s funny. I can’t tell or remember a joke; but having won a prize for humor, I have become a person about whom other people have certain comedic expectations.”

4)
When you can’t come up with any useful advice about how to be funny, you will gain a reputation as a stinge and a kill-joy.
Most writers are familiar with this scenario: you are in the grocery store or at the dentist’s. Tomato in hand, or mouth full of soggy wads of cotton, you hear someone begin to tell you about their idea for a novel. It’s an excellent idea, and this person is willing to share it with you; he just doesn’t have the time to write it. The novel is about life on the planet Zendar, which is inhabited by creatures who. . . (My eye doctor, during every annual checkup, tells me that he intends to write novels when he retires; I am always tempted to tell him about my plan to take up ophthalmology in my golden years.)

But refusing to help someone be funny is apparently more severe an affront than refusing to help them write a fantasy novel. Having been denied, your interlocutor will reserve for you the respect they would give to a snarling, ill-natured clown.

5)
You will be asked to say semi-intelligent things about humor.
At the Thurber prize ceremony, when my name was announced, I stumbled breathlessly up to the podium at Caroline’s Comedy Club on Broadway without notes or a coherent idea of any kind. I hadn’t expected to win (I had put my money on Roz Chast), and didn’t remember (perhaps because I hadn’t been paying attention; I have a tendency to day-dream) anyone telling me about the possibility that I would need to speak. Mainly I had been concentrating on furtively transferring to my niece, in the audience, the can of non-stick laundry spray (I was wearing a dress; I don’t often wear dresses) that I had purchased during a moment of anxiety at a nearby Rite Aid an hour before. My acceptance speech, which may have lasted 35 seconds, was referred to as “brief.”

6)
You will have to confront the misconception that comedy is all about lighthearted cheer.
The book for which I won the Thurber award is mainly about failure: but it also involves death, despair, penury, corruption, heartbreak. . . . As a child, when I wasn’t writing poems about terminally ill pets, I spent my idle hours wandering around in a nearby graveyard, chewing onion grass and deciphering the old script on the stones. My taste in comedy tends toward the morbid. Humor—doesn’t everyone sense this?—is devious, cynical, subversive. It may appear festive on the surface, but there is always turmoil and affliction within.

7)
Someone, slyly, perhaps while jingling the change in his pants pockets, will ask you what you think of the idea that women aren’t funny.
During a recent panel about women and comedy at a writers’ conference, several people made reference to Christopher Hitchens’s infamous Vanity Fair essay, which argued that humor was a male trait and a courtship skill, refined over millennia via evolution. “An average man has just one, outside chance: he had better be able to make the lady laugh.” The theory here: men are actively charming; women passively charmed.

Some very high profile men have lately proven themselves less-than-charming; and the conference consensus was that women—some of them, at least—are in fact very funny. During my portion of the panel (perhaps this is not surprising), I talked mainly about female rage.

8)
Someone else might ask a follow-up question: if women are funny, why did you write a book with a male, rather than a female, protagonist?
I wish I had a snappy answer to this one—men are easier to make fun of?—but the truth is simpler: that’s the way the character came into my head. From the start, Jason T. Fitger was egotistical, boorish, emotionally clumsy—and he quickly proved himself capable of making me laugh.

Dare I say it? I had invented him, and our relationship soon became symbiotic: he allowed me to pass, briefly, as a funny person, and I allowed myself, despite his considerable faults, to fall in love with him. I was charmed.

Julie Schumacher grew up in Wilmington, Delaware, and graduated from Oberlin College and Cornell University. Her first novel, The Body Is Water, was an ALA Notable Book of the Year and a finalist for the PEN/Hemingway Award and the Minnesota Book Award. Her other books include the novel Dear Committee Members, a short story collection, An Explanation for Chaos, and five books for younger readers. She lives in St. Paul and is a faculty member in the Creative Writing Program and the Department of English at the University of Minnesota. 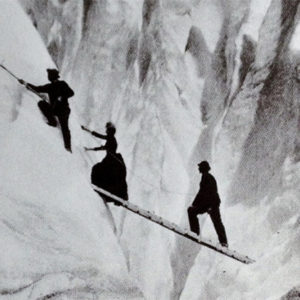 Do what you love most, and must do, and not only will you meet those who share your passion and know your devotion, but the choosing...
© LitHub
Back to top