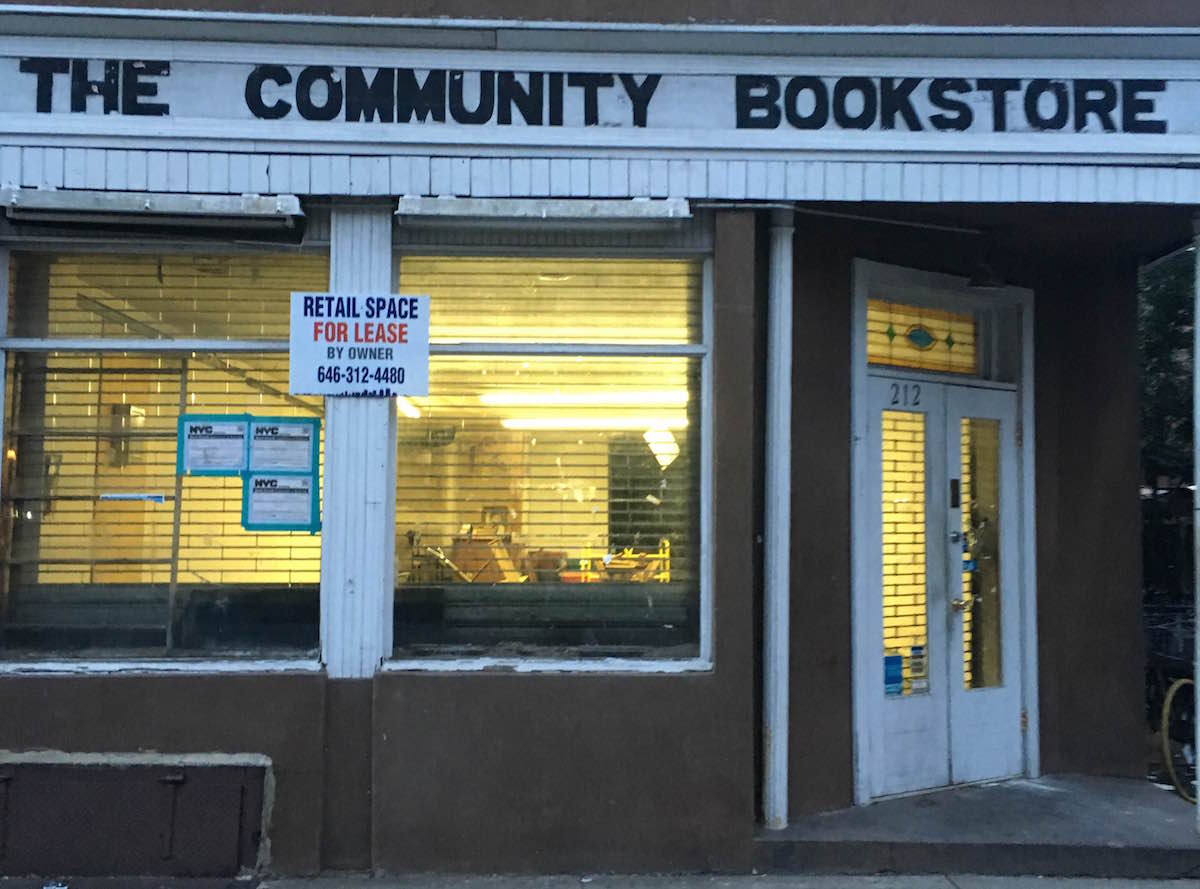 The “rest in peace, beloved bookstore” personal essay is by now so well worn that the genre may merit its own eulogy. We already know that independent bookstores often close. (Then again, for the moment, more of them are opening; the number of independent brick-and-mortar bookstores has grown 30 percent since 2009, according to the American Booksellers association.) And we already know that when they close, it breaks hearts.

But it may be worth asking why we care so much.

When I walked into Community Bookstore in Brooklyn earlier this month, I didn’t realize it was its final night in existence. I knew, obviously, that the shop was closing—you couldn’t be unaware of that if you live in the neighborhood, or if you read New York-centric publications like the Times or New Yorker or even blogs like Gothamist or Brownstoner, all of which had written a year ago that the store would close. But all of the news stories that had come out last summer cited a closing date of May 15, and the store ended up hanging on through June and July.

The boxes of used books outside, which had gradually descended from $2 to $1 to “FREE” according to the hand-written, yellowed pieces of paper that jutted out from each, were still on the sidewalk every night. On Tuesday night, I popped inside and looked around. The shelves were mostly cleared out. I didn’t buy anything.

When I walked by the next night, it was closed up for good, completely empty, with a rental sign in the window. The sight of the bare space stopped me in my tracks. It looked so small and sad.

The store sat on the corner of Warren Street and Court Street, Cobble Hill’s main drag, across from Pedlar coffee shop. Even when it was in business, even years ago, you could’ve mistaken it for a place that had long-since closed.

On the outside: windows with a permanent film on them; a cracked facade; no sign in the door apart from the ancient black lettering high above the shop; no splashy, beckoning book display in the window like its cousin, the indie shop BookCourt, just a few blocks north on the same street.

As for the inside: Where to begin?

The inside of the store looked like a bomb shelter. Bookshelves lined every possible spot of wall. On the shelves, books were wedged in to every row. The slim spaces in between shelves had books in high, teetering towers, stacked atop each other like Jenga blocks. The floor was an ocean of books; the toes of your shoes nosed the corners of paperbacks as you shimmied along.

The air inside the store felt charged—not musty or foul, but tight. It was silent inside. You could suddenly lose 30 minutes when you had only meant to pop in for a second. It was probably a claustrophobic space for some, but for others it was comforting, like a childhood fort. That’s how it felt to me.

The interior looked like what you’d get if a tornado banged around inside an indie bookshop, whirling up everything in a heap, and then the owner left it that way for three decades, adding more books to the clutter without ever cleaning up from the storm.

That’s basically what did happen. The owner, John Scioli, bought the space in 1980 for $500,000 and slowly let it get out of control. “I was afraid I was going to die under a pile of books one of these days,” he admitted to the Times in a profile last summer. (In a short New Yorker video from March, he describes the condition of the store with neither shame nor pride, just acceptance.) He sold the space last summer for $5.5 million, and had one year to clear out and another two years to leave his apartment upstairs.

All of this biographical information I know only from news articles about Scioli, not from him. He is not a gregarious man. He probably exchanged fewer than 50 words with me in the four years I’ve been frequenting the store. And that’s just fine. When I did speak to him, it was always about books, and not their content (he wasn’t exactly doling out recommendations with a smile) but their availability: Did he have a certain title? (Almost always, yes.) How much did he want for it? (For a new book, always a figure below the retail price; for used, almost never more than $6.) But his gruffness was just his way. If you wanted to make him talk to you, he would.

None of my friends lived in Brooklyn when I first moved there, so I spent many weeknights walking down Court and Smith streets, exploring. One of the first shops I entered, of any kind, maybe the very first, was the bookstore, because it was open at night. In fact, it didn’t open until night. The store had no regular hours, but the owner, I learned, would usually saunter out between 5 pm and 7 pm. Oftentimes he’d still be open at 2 am. If you didn’t leave your home after dinner, you could easily live right near the store without ever once seeing it open for business.

The first time I went inside, I was so taken aback that I thought maybe it wasn’t a store but a museum of some kind, or an art exhibit in progress. There was no proprietor to be seen, no one else inside. But as messy as it was, there was some still some semblance of sections. The entire right wall, when you entered, was literary fiction. At the back, in a separate alcove of the store, were narrower genres like horror, sci-fi, politics.

On that first visit, I picked out two paperbacks, one clearly used, the other new, and brought them to the front. Scioli appeared from the shadows. He shuffled over to the register and examined the books, mumbling, appraising, and I suddenly thought of a passage I was used to reciting every year in synagogue on Yom Kippur, something like, “You measure and muster every soul.” He came up with a figure and I paid in cash.

When I scan my bookshelves right now, as I write this, I can see so many books I bought at Scioli’s store: Stormy Weather by Carl Hiaasen; A Person of Interest by Susan Choi; You Bright and Risen Angels by William Vollmann; John Henry Days by Colson Whitehead; A Thousand Acres by Jane Smiley, to name just a few.

I ended up treating the store as a safe haven for a number of different situations: when I had 10 minutes to kill, waiting for a friend to arrive; or on my walk to the subway, when I was running early; or on my walk down Court Street on the way home on a weeknight after a dinner out. BookCourt, only a few doors away, is more famous in New York and hosts popular readings each week, but in my four years in the neighborhood I’ve spent twice as much time in Community Bookstore. It was a comforting space. Late at night, its light shined, and drew me in like a bug zapper. The bookstore was a beacon.

There are many other terrific small bookstores in Brooklyn and Manhattan. Greenlight in Fort Greene, Spoonbill & Sugartown in Williamsburg, and McNally Jackson in SoHo all have such meticulous presentation that they make you want to spend more money.

And of course New York doesn’t have a monopoly on such shops. Parnassus Books, in Nashville, has attracted a lot of press because Ann Patchett is a co-owner; it bills itself as “an independent bookstore for independent people.” Drawn & Quarterly in Montreal, Lutyens & Rubinstein in London, and Shakespeare and Company in Paris all left lasting impressions on me. Last month, I visited Livraria Lello in Porto, Portugal, the famous 110-year-old store that is breathtakingly beautiful and inspired JK Rowling.

But that’s why Community Bookstore was special: no delusions, no pretense, no bullshit. It was just a large room, the size of a one-bedroom apartment, stuffed to the gills with books. The store didn’t sell pens, or postcards, or t-shirts, or mugs, or iPhone cases, or tote bags, or magazines. Just books.

Regardless of what the national statistics show for indie bookstores, in Cobble Hill a number of local, homegrown businesses are disappearing. The rent is too damn high, I guess.

American Beer Distributing Co., a spacious, reliable beer store that was just two blocks below Community Bookstore, closed two years ago after 70 years in the location; its landlord raised the rent. The huge space is still sitting there empty, like a bad joke. Brucie, a small Italian restaurant on Court Street, closed its doors. Last Exit, a dive bar on Atlantic Avenue with weekly trivia night, closed its doors. Angry Wade’s, a sportsbar with a popcorn machine and dart board, told patrons this year it would close because its rent went up, but it has managed to hang on, for now. Nearby restaurants like Dassara, and Char No. 4, were not so lucky. Smith Street, the other main bar-and-restaurant strip in Cobble Hill, parallel to Court Street, had more than 12 small businesses close in the past year.

As these local haunts close up, rich-hipster stores like Warby Parker and Rag & Bone have moved in.

Community Bookstore was something different, and special to many, although that was not always obvious to people the first time they saw it. And nothing quite like it will likely pop up in my neighborhood again.

Daniel Roberts is a journalist in New York. He currently works for Yahoo Finance, and before that spent five years at Fortune Magazine. He's written about books for Salon, The Daily Beast, Sports Illustrated, HTMLGIANT, The Millions, The Morning News, and many others. 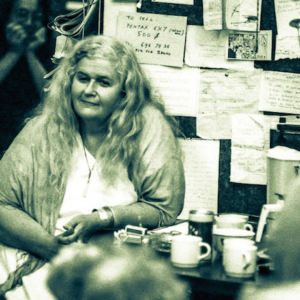 Who am I? Benjamin Rybeck on trying to figure out if he’s a writer and a bookseller. | Literary Hub There is no secret...
© LitHub
Back to top