In praise of poet voice • Why we need more single women in politics • How Josephine Baker transformed from dancer to spy • When Anonymous focused its digital wrath on the Steubenville rape case • Taking refuge in the pixelated pastoral of The Legend of Zelda • “The moon is a lesbian, goes the meme, and it stands to reason that the ocean is a lesbian too.” • Antonia Angress on muses, longing, and being seen • Why culture shock can be a powerful tool for SFF storytellers • What Chris Belcher is reading now and next • Ruby Tandoh on turning meals into memories • Erika L. Sánchez on writing the characters she wanted to read • Amy B. Reid on translating Mutt-Lon’s The Blunder • Dispatches from the childhood of a future pilot • How rummaging through Oliver Stone’s home office allowed a young Rafael Agustín to dream big • Can our capacity for empathy save us from ourselves? • On the Fleabag-ification of Persuasion’s Anne Elliot • Why degrowth is imperative for a globally just future • How systemic racism is downplayed and dismissed in the classroom

"There's no invention in the void." Read a letter from J.R.R. Tolkien on the origins of Middle-earth. 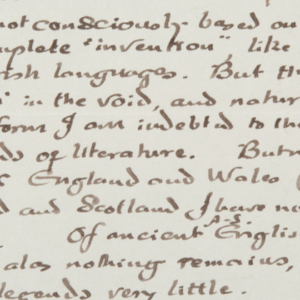 "There's no invention in the void." Read a letter from J.R.R. Tolkien on the origins of Middle-earth.

A handwritten letter from J.R.R. Tolkien is currently up for auction, with bidding beginning at $5,000, if you've got that...
© LitHub
Back to top