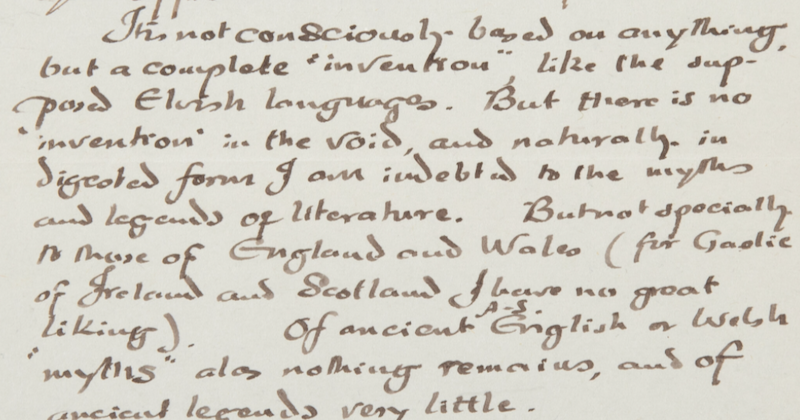 “There’s no invention in the void.” Read a letter from J.R.R. Tolkien on the origins of Middle-earth.

A handwritten letter from J.R.R. Tolkien is currently up for auction, with bidding beginning at $5,000, if you’ve got that kind of cash lying around. The letter, which is dated April 12, 1956, is a response to a fan, and discusses both his inspiration for The Lord of the Rings universe and a little bit of history about his own name:

Dear Mr. Earle, Thank you for your kind and appreciative letter. I hope to retain your approbation to the end of the work. It’s not consciously based on anything but a complete ‘invention,’ like the supposed Elvish languages. But there is no ‘invention’ in the void, and naturally in digested form I am indebted to the myths and legends of literature. But most specially to those of England and Wales (for Gaelic of Ireland and Scotland I have no great liking). Of ancient A. S. English or Welsh ‘myths’ alas nothing remains, and of ancient legends very little. My name’s German in origin, though in this anglicized form it has been in England some 200 years (and has emigrated to America); but it remains very unusual. It’s a form of the German word toll-kühn and should properly be spelt Tol(l)kichin. The correct pronunciation is therefore Tolkeen, with the accent on the ‘o’ (as in doll). Yours sincerely, J. R. R. Tolkien.

You can read the full original letter in Tolkien’s glorious handwriting here.