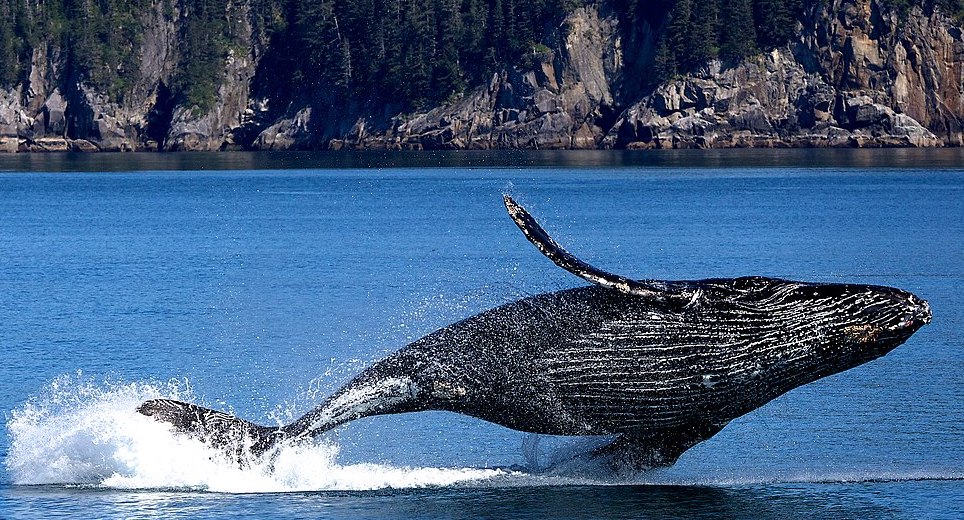 On Finding Solace Among Nature’s Gentlest of Giants, the Gray Whale

"Even in the constant darkness of the polar winter, each aġviq finds plenty to sing about."

Wind spits spray in my face. Water slops against the sides of our small fishing boat as it shudders out of the harbor, into a dawn that billows fire above and below the horizon. Max, my two-year-old, is up front “helping” drive the boat. I met the skipper, Chris, just twelve hours ago. We are borrowing a dad, one who has lived at sea and might be able to open a door into this secretive ocean.

Today there is one last chance for things to go right. There is nothing to do except trust in this generous stranger, give myself over to the wind and the water, keep my eyes fixed on the waves, examining every curve, every roll, every swirl, every ripple.

“Look that old rust bucket,” shouts Max from inside the cabin, pointing. We are cruising slowly past the rust-streaked blue-and-white hulk of a commercial fishing boat. He’s channeling Grandpa Pig arguing with Granddad Dog from the Peppa Pig cartoon. The boat’s name, Faith, is written in strident white capital letters on the bow. I have to look away. I have lost faith in my idea of following the gray whale migration, in the whales themselves, and most of all in myself.

I wanted to show Max how the gray whale mothers and calves travel thousands of miles from the lagoons of Baja California in Mexico to the Arctic Ocean, to prove to him that it is possible to do anything, to overcome anything, with just the two of us. It was me who needed convincing, though, and things haven’t gone to plan.

There is nothing to do except trust in this generous stranger, give myself over to the wind and the water.

Kodiak Island, our final stop, is a major milestone on the gray whale highway and is our last chance to see them before we have to leave. On the map, the island looks as though it’s been carelessly thrown from the Alaskan mainland, as carelessly as I’ve thrown away ten thousand pounds of bank loan to finance this trip. Our visas are spent too.

The journey was supposed to help me start anew. It distracted me for a while, but now that it’s ending I’m confronted by all I ran from, a list of my failings. I failed to set up a life for us that I could tolerate, failed to earn enough money to support us, failed to just get on with it like everyone else. I’ve repeatedly and spectacularly failed at love and of course failed to see what a stupid idea this journey was in the first place. I’m reeling with so much failure that my legs are unsteady and I grip the side of the boat, press my hands onto the wood. My fingers leave no impression.

We slide past Arctic Hunter, Resolution, Provider, and Lady Kodiak on the final row of moorings. The boat throttles up. The water gets agitated. We creep out from behind a hook of land. The sea, which is now a jagged industrial gray, withholds judgment, unlike me. It could drown me without it being anything personal. Its indifference is comforting. The freezing rip of air anesthetizes the sorrow in my chest. The moving mass of water that backs with a noise like thunder against the far-off cliffs drowns out my head wreck.

Max is sitting on Chris’s knee, a small pair of hands and a large pair of hands in company on the wheel, guiding our course. Max is enjoying himself so much he hasn’t called for me once. I see the corner of a wide smile, round cheek framed by blond tangles and the ruff of his hood. He turns and fixes his eyes on me. Large, slightly elongated, and usually blue, they are softened to gray by the light from the clouds.

The island shuttles off through the ocean behind us. This is the Gulf of Alaska, where the Bering Sea breaks its back on the Aleutian Islands, which stretch westward toward Russia. The Unangan or Aleut people call one of these islands the Birthplace of the Winds. Chris, who used to be a fisherman and is now a landlocked electrician, is treating himself to a fishing trip for Father’s Day. His wife and their two young daughters bump happily on the benches in the cabin as we skitter across the swells. Max and I are tagging along because Chris says he knows where the gray whales feed.

The sea, which is now a jagged industrial gray, withholds judgment, unlike me. It could drown me without it being anything personal.

As well as being home to the ominous specter that is the Kodiak bear and this miraculously kind family, the island is special for its benthic mud. So far, the place has been shrouded in too much fog to spot any sea life, and in my dispirited mood the cold sludge at the bottom of the sea invites me. I hold on to the gunwale and close my eyes, sink down through layers of water in my mind.

I am the whale diving. The light shrinks to a shining hole above. My blood pump slows, lungs close, body shuts down. Color slips away. I’m lost in a deep mist. I hear the ocean floor, twisting, flow- ing. Water sizzles, hums with life, shrimp snap. I probe the dark for voices, call out, try to summon the grays.

In the dark of winter, under the sea ice of the northern Bering Sea, there are voices. Aġviġit, bowhead whales, Balaena mysticetus, like to sing. Many mammals have calls but few sing. The repertoire of an aġviq is rivaled by only a few songbirds. We’ve captured the gentle echoing cries, screeches, trumpets, and rubbery squeaks, sometimes bovine, sometimes human-sounding, sometimes like a bow scraping roughly across the strings of a double bass.

Oceanographers put a hydrophone into the sea off the east coast of Greenland hoping to hear a few sounds. They discovered a loud concert that continued twenty-four hours a day from November until April, with never the same melody between seasons. Kate Stafford led the listening project over three years of study. “If humpback whale song is like classical music, bowheads are jazz,” she said. Even in the constant darkness of the polar winter, each aġviq finds plenty to sing about.

As the spring currents flow north and east, so does aġviq, into the summer’s window of light at the top of the planet. The super-organism of krill that hatched in the Bering Sea is swept in a cloud to Alaska’s northern coast. It’s copepods, though, other tiny crustaceans that are the preferred calorific engines of aġviq growth and which draw the whales all the way east to the Canadian Beaufort Sea. They feast on these living globules of fat that swarm in the waters of Amundsen Gulf when microalgae bloom. Aġviq is said to feed two steps away from light. Leapfrogging to the bottom of the food chain eliminates steps where energy is lost and is why the whales can become so huge. It’s also why they must spend so much time feeding. The thick blubber just below the skin stores energy and insulates the body. Its elasticity streamlines.

A male aġviq waits at the southern edge of the sea ice, resting his chin on the edge of the floe. The animals are straining against the final days of winter. Whales, seals, walrus, caribou. High above come geese, Arctic tern, ptarmigan, and snowbirds. All are pulled north as the freeze lifts off the land and water. When the sea ice opens up, the Bering Strait will funnel the sea mammals north. A pod of aġviġit doze at the edge of the polar ice pack. Only half their brains are actually asleep as like all whales they must make a conscious effort to breathe.

One aġviq, a cow, is swollen. Her calf is growing, will be born in six weeks and swim alongside her. A gull lands on her back and she startles, thrashing the water. Around her whales do synchronized acrobatics. They tail-slap, mate, occasionally they breach and spy-hop, heads pointing vertically out of the water. The ice creaks and pops. A wind from the right direction will split the ice, open up a crack into a lead, a channel. They know it’s not yet time, somehow sense the ice ahead is too densely packed. They are poised. They wait. 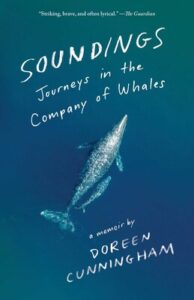 Excerpted from Soundings: Journeys in the Company of Whales by Doreen Cunningham. Copyright © 2022. Available from Scribner, an imprint of Simon & Schuster.

Doreen Cunningham is an Irish-British writer born in Wales. After studying engineering Doreen worked briefly in climate-related research at the Natural Environment Research Council and in storm modeling at Newcastle University before turning to journalism. She worked for the BBC World Service variously as an international news presenter, reporter, and editor for twenty years. She won the RSL Giles St Aubyn Award 2020 and was shortlisted for the Eccles Centre and Hay Festival Writers Award 2021 for Soundings, her first book.

Dispatches From the Imaginative Childhood of a Future Pilot 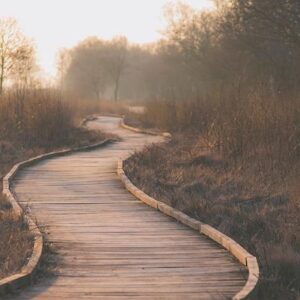 The following first appeared in Lit Hub’s The Craft of Writing newsletter—sign up here. When I was first learning...
© LitHub
Back to top
Loading Comments...