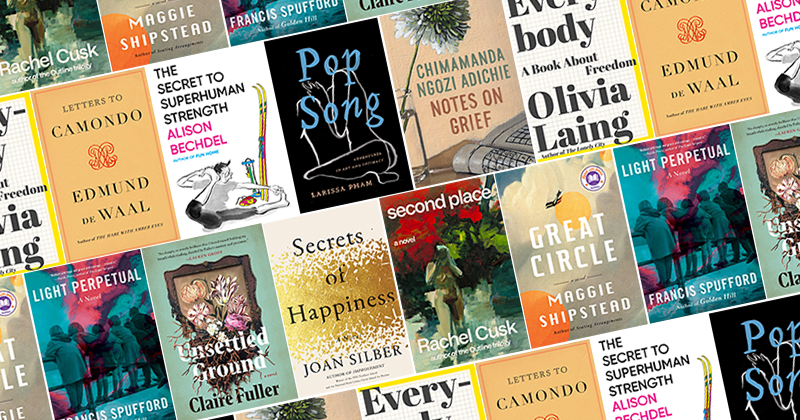 Rachel Cusk’s Second Place, Joan Silber’s Secrets of Happiness, Alison Bechdel’s The Secret to Superhuman Strength, and Chimamanda Ngozi Adichie’s Notes on Grief all feature among the Best Reviewed Books of the Month.

Listen to an interview with Rachel Cusk here

“You know when you’re reading a page of Rachel Cusk’s fiction. Her narrators tug insistently if coolly at the central knots of being. They analyze every emotion as if it were freshly invented. Nothing is extraneous … The narrator is familiar: a sharply observant writer in middle age … More notably, this book has a swirling hothouse quality that’s new … It’s as if Cusk has been reading Joyce Carol Oates’s best novels. She digs into the gothic core of family and romantic entanglements. I filled the margins with check marks of admiration, but also with exclamation points. This novel pushes its needles into the red … One doesn’t come to a Cusk novel for plot but for her extra-fine psychological apparatus. Yet there is a fair amount of plot in Second Place … If I could have rubbed a lamp and lightened this book’s lurid intensities, I might have. It is not a novel that gladdens the soul. But gladdening the soul has never been Cusk’s project.”

Listen to an interview with Maggie Shipstead here

“…a relentlessly exciting story about a woman maneuvering her way between tradition and prejudice to get what she wants. It’s also a culturally rich story that takes full advantage of its extended length to explore the changing landscape of the 20th century … A novel that switches between two different periods and tones confronts the essential challenge of rendering both competing story lines engaging, and Great Circle struggles to make that case. Hollywood, with all its hypocrisy and excess, may be a fat target, but it’s also a tattered one, and Shipstead has far more success bringing 1914 to life than 2014. The extraordinary realism of Marian’s chapters can make the broad strokes of Hadley’s sections feel light in comparison … But fortunately, when Hadley gets serious about discovering the real story of Marian, the novel’s parallel stories begin to resonate with each other in interesting ways. Though separated by decades, the aviator and the actress are both powerful women, rising from devastating tragedies to forge their own way … Whether you’re planning a trip or settling in for a staycation, Great Circle is my top recommendation for this summer.”

“… gorgeous … trains our attention on everyday life and seemingly unremarkable people, those who, as George Eliot wrote, ‘lived faithfully a hidden life, and rest in unvisited tombs’ … Spufford is less interested in how people with different dispositions and capabilities ‘end up’ than in specific moments, be they routine, wondrous, or horrifying, that make up the texture of a life, events that make it worth living or a living hell … Spufford is uncannily good at capturing the allure such boys exert over a certain kind of girl. This, too, is a high point, an interlude picked out as if by a spotlight, in which Val feels especially alive … the sort of novel that’s carried by its descriptions, passages that transform the ordinary into the transcendent and leave us marveling … The peril with this approach, of course, is that we might miss the goals—an author’s vision might dissolve into merely a page full of words. Spufford almost always strikes the right balance, although his restraint does fail him in the book’s overlong opening scene … Ben may close the novel with a paean to the creator that he and his inventor (Spufford has written about his Christian faith) believe in. But this genial novel makes space for readers who believe that nothing is eternal.”

“With a textured, naturalistic writing style […] Ms. Fuller weaves between ordinary village life and the Seeders’ shadowy family saga, which is marked by illicit love, violence and blood debts. The close attachment to Jeanie’s and Julius’s limited points of view enrich the suspense as long-kept secrets are gradually revealed. But even the disclosures and resolutions can’t entirely domesticate Unsettled Ground, which carries its lonely, stirring music of loss to the end.”

Read an excerpt from Secrets of Happiness here

“Her most interesting characters are alert to the main chance, nursing various degrees of larceny in their hearts; while the more sympathetic—if less interesting—ones have grasped the paltriness of a life dedicated to getting and spending. In the seven artfully linked stories of Ms. Silber’s new novel…we find both types, but once again those who display the will to be canny, which money in the offing or in the pocket seems to confer, are the most deeply penetrated and superbly conjured … Each of the seven sections engages our interest right off the bat; each has a first sentence pregnant with promise … Having seized our attention, Ms. Silber pushes forward into her characters’ stories, summing up in fleet, fluid prose the circumstances and acts that have shaped their lives to this point, then slipping deftly into further events where, for better or worse, the gravitational force of money can be felt … Despite their unity of theme, Ms. Silber’s stories are the furthest thing from didactic … they are rich with the complexities of life; the characters’ motives and their decisions arise out of personalities meeting circumstance. Further, the stories create a world made fully dimensional through changes of perspective—major characters appear and reappear as part of one or another’s experience and testimony … It is a fine thing, subtly done, and truly exhilarating.”

“.. achingly of its time … I really appreciated Adichie’s discomfort with the language of grief … Books often come to you just when you need them, and it is unimaginable to think just how many people have, like the author, lost someone in this singularly strange period of our history. Adichie’s father didn’t die from COVID-19, but that doesn’t make the aftermath of that loss any less relevant … A book on grief is not the kind of book you want to have to give to anyone. But here we are.” 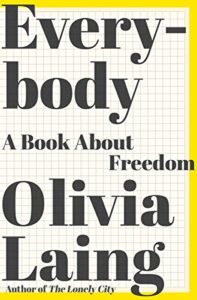 2. Everybody: A Book About Freedom by Olivia Laing
(W. W. Norton & Company)

“Laing steadily built her reputation as an editor and writer with an earnest sophistication. She doesn’t make her mark with arch observations or cool reserve. Her enthusiastic criticism is fueled by a political and humane connection as well as an aesthetic and intellectual one … Everybody concentrates with exuberance on bodies as a means to riddle out the expression and performance of freedom. Through protest, suppression, illness, sex, and movement, human bodies are a battleground for freedom … Through careful study of the lives and deaths of artists and activists such as Susan Sontag, Kathy Acker, Christopher Isherwood, Andrea Dworkin, Malcolm X, Bayard Rustin, and Nina Simone, Laing uncovers Reich’s influence beyond his lifetime into the civil rights movement as well as the gay and sexual liberation movements of the 20th century … What surfaces are the mechanisms of shame and glory that inform radical engagement … Dreaming beyond conventional wisdom and restrictive visions, Laing emboldens us to seek liberation across difference in the face of turmoil. Everybody is a galvanizing book during a time of incredible hesitation.”

“Everyone who bought, read and loved Edmund de Waal’s first book. The Hare With Amber Eyes, will find equal interest and delight in Letters to Camondo. It is a beautiful and fascinating book, even if its last pages are painful and depressing. It is also beautifully produced, on good paper with fine illustrations, and how Chatto & Windus can do this at less than the price of many shoddily-published novels beats me … This is a marvelous book, elegant, tender, loving, appreciative, disturbing, a reminder of both the fragility and resilience of high culture, indeed civilization.” 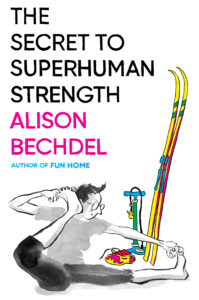 “Drawing is often seen as a cartoonist’s primary skill, but Bechdel can also really write. The various strings of her narrative are woven together in a way that feels fresh, clever and moving. There is also dry humour … Her conclusion is inevitably trite, but Bechdel makes for such a likeable protagonist that readers will be pleased for her all the same. And while this book might not be the author’s most gripping work, it is probably her most beautiful, being the first to have been rendered in full colour … Bechdel’s work is elegant and literary in a way that people don’t expect from graphic books. If you haven’t read anything by her yet, it’s a good time to catch up.”

“Pham’s collection boldly reinterprets the memoir-essay genre by accompanying her stories of love with ekphratic commentary on the visual, aural, and verbal language of intimacy. This oblique, innovative method is the author’s makeshift solution to the problem she poses in the collection of how to write on intimacy. Through this form of ekphrasis, she is able to give texture to surface-level events and feelings, as well as to map out her own unique artistic sensibility … Pham’s absorption with the collection of vessels of intimacy, most explicitly represented by photographs of her and her boyfriend, is motivated by a fear of losing that intimacy, of loss of love. She repeatedly resorts to artifice and performance to construct a narrative of her relationship that preserves intimacy despite its infidelity to reality. If there is a coming-of-age for Pham in this textured, meditative book, then it lies in the shedding of artifice.”