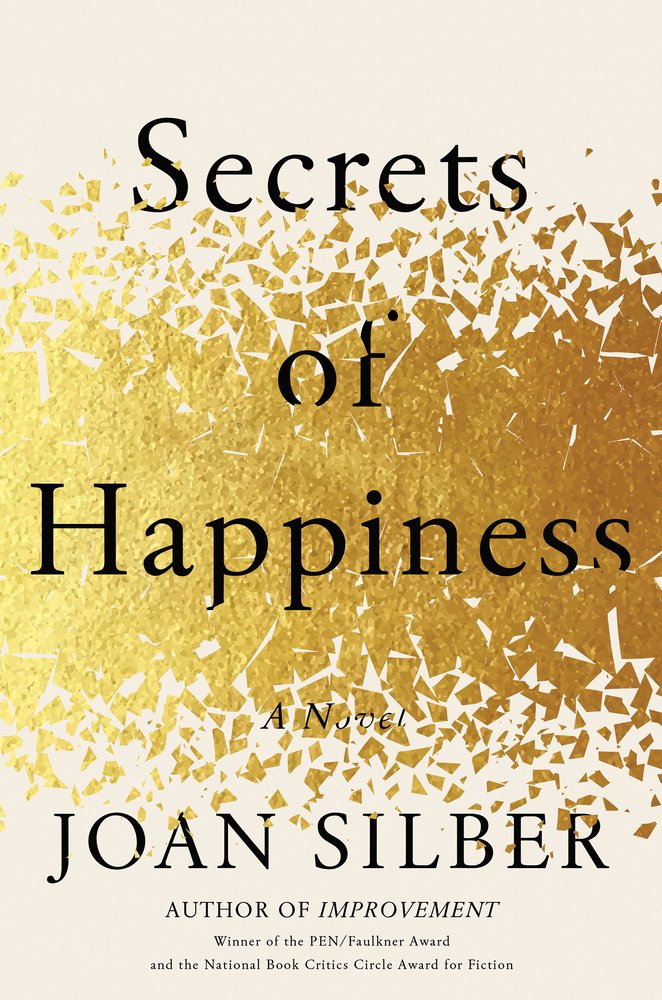 The following is excerpted from Joan Silber's latest novel, Secrets of Happiness, about a man who discovers his father has long had another secret family. Silber is the author of several novels, including Improvement, which won a National Book Critics Circle Award and a PEN/Faulkner Award. She lives in New York.

My high school girlfriend wanted me to marry her. Who gets married in high school?

“My mother isn’t even married,” I said.

It was very devoted of her, very desperate. She was going off to college in the fall, to Michigan, and I was staying home in Queens, neighborhood guy that I was, and she didn’t want to lose me. We had sex whenever we could, that summer before she left, but I didn’t make any false promises. I’d be reeking from my job washing dishes at the Golden Treasure Thai Restaurant, and she’d act as if sweat and grease were so seductive she couldn’t stand it. All summer we were at it, with melancholy adding deeper pangs to the act. Wherever I was, she was in my head every second, but I knew it couldn’t last forever.

And it didn’t. We phoned and emailed every day the first month—miss you, miss you, we wrote—but then she got busy with school and extra activities they had at night, and I was taking computer courses and still putting in my hours at the restaurant, and right when she had to talk to me about a certain person she met in Cinema Club, he knew amazing things about film, I already had a thing going with a girl in my Intro to Data Structures class. “You know how sorry I am,” she said, and she was tearful. My voice was hoarse when I said I was sorry too. Part of me was relieved, but not as relieved as I expected.

“You’re better off,” my mother said. “Not ready for any weddings.”

Veronica married that guy from college, right after graduation, and it turned out his last name was the name of a famous department store. He came from a family with unspeakable sums of money. I never thought that was why she married him—she wasn’t like that—and people told me they lived in a junky apartment in Bushwick, before those blocks got so gentrified. I heard he wasn’t into showy spending, the husband. He worked as a cameraman, which paid decently when any film wanted him, which wasn’t that often. People said he was an okay guy. He would never be okay by me, but that wasn’t his fault.

Veronica had not grown up fancy. Her dad was the maintenance supervisor (that meant head janitor) of our elementary school, and her mom stayed home with Veronica and the three other kids. When my younger brother, Jack, who always had behavior issues, decided to scribble with Magic Marker all over the lockers, her father had him wash it all off with a scrub brush and scouring powder, and he got Jack to do it very peaceably. He scared him just enough to convince him.

My mother was always worried about Jack. By the time he was fifteen, he was hanging around with what I called thugs (she had a word in Thai). Queens had plenty of Asian gangs, big on extortion and drugs and territorial brutality, and they had teenage gangs attached to them, like farm teams. Jack was hovering around a mixed cadre of Chinese and Vietnamese guys, not nice people. My mother was frantic to switch him into another school, get him away from those thugs, back to his better self. Mothers had their illusions. And how was she going to do this? Her American lover, our father who didn’t live with us, had plenty of money. There were schools that could take my brother in hand.

Our father refused flat out. His American kids, his regular family, had gone to public schools, and they were perfectly fine. He believed in public education. He wasn’t paying out an extra thirty thou a year in tuition for my crazy brother. There was no discussing it, as far as he was concerned. They did discuss it, in furious voices, and my mother was so outraged she filed papers against him in court. It cost her money too.

She hadn’t known, of course—what did she know?—how long the legal stuff would go on. And there was Jack, not improving, so she moved to plan B. She sent my brother back to Bangkok, to live with her sister. I think he went without protesting because he’d heard Bangkok was wilder than Queens, more full of interesting trouble, and maybe for him it was. He was smiling like a fox in his photos. And in Thailand he was never in any gangs, as far as anyone reported. Thanks to my mother.

My mother was thrilled when I got my certificate in website development, and I passed a bunch of the industry’s own exams, and I was hired for a job I wanted. At least one of her kids was making good. “I’m so so glad,” she kept saying. Her only disappointment was that I didn’t have to wear a jacket and tie to work—IT people were casual—but she was over the moon that I worked in a high-rise in Manhattan. Actually, I was too, in my jaded way. I liked that job, but I lost it in the Crash. I went through a bunch of jobs, those first years.

I moved out of my mother’s, but I never moved out of Queens, which was how I heard about Veronica’s husband. People told people. My friend, Binh, got the news from his sister, Veronica’s friend since kindergarten. The husband had been killed crossing a street at night in Leeds, England, hit by a speeding taxi when he came out of a pub and looked right instead of left.

“Shit,” I said. “I can’t believe it.” It was the wrong story for this husband, someone that young, that protected. “Shit. Veronica wasn’t hurt, right?”

“She was in New York. He was over there shooting some documentary about the history of fabric mills. You going to call her?”

“How could she be okay?” Binh said. “They were married five years. She’s a widow.”

I made a botch of saying how sorry I was, but she was used to that by now. “Everybody’s calling,” she said.

“Tell me if there’s anything I can do. Tell me if you need anything.”

“I’m okay,” she said. “I have everything. My mom comes every day and cooks for me, just so I don’t fade away.”

And what was she going to do now? Everybody in the neighborhood was wondering. She hadn’t worked at a job since her lunch shifts in the college cafeteria; the husband had supported her. Binh’s sister said that the husband—his name was Schuyler, did I know that?—and his two brothers had all come into some part of the family holdings when they turned twenty-one. And whatever he had in his bank account was Veronica’s, wasn’t it?

Probably the money wasn’t just in the bank either; it was invested in things, different things. Did the man have a will? Veronica (I made a point of phoning her now, checking in) was pretty sure he’d never gotten around to making one. A lawyer someone had told her to consult said it might take a year to sort everything out, but she was next of kin, and if there were no other claims (none yet), it should all go smoothly.

My ex-girlfriend was about to be an heiress. Talking about this directly (which plenty of people did) appalled her. “I get congratulated,” she said. As if her future windfall was a payment for having lost Schuyler, a crass profit. As if she’d made a lucky deal. I reminded her how she’d once been a big fan of Dickens’s Great Expectations—we had to read it in high school—and now she was like Pip, waiting for her big legacy to come in.

“But Pip gets tricked about the legacy part,” she said. “He thinks his allowance is all from crazy rich Miss

Havisham. All that training to be a gentleman. He guesses totally wrong about where it’s coming from.”

“People are very crude about wills in those nineteenthcentury novels,” she said. She’d been an English major in college, perfect preparation for not having a job. “All those family members with their claws out, waiting for some rich aunt to keel over. Their main chance.”

“Nobody hates money,” my American father always said. An undeniable fact, all over the world, but he had a way of saying it that sounded smug. He wasn’t short on that wanted commodity. But nobody gets to have everything forever, and a few years after my mother fought with him about my brother Jack, he lost his health, pretty much, and he wasn’t even that old. He had a stroke, and then he must’ve had more strokes, and from the last hospital stay he somehow talked my mother into bringing him home with her and taking care of him. He lay around in the living room watching TV and giving orders and slobbering over plates of her food. Helping him into the tub was a hideous production she used to sometimes enlist me in.

My mother tended him well, she never neglected him, and he was a pain in the ass. She took care of whatever he wanted for more than a year, before he died in his sleep on the couch in the living room.

Veronica told me that Schuyler, her husband, had always liked England, and he’d been having a good time on the film shoot. He had a cheerful level of alcohol in his bloodstream when he stepped out into that street—he loved the ale there—and traces of hash were in his system too. Hash, not marijuana? Veronica said she wasn’t up on his recent hobbies. The two of them hadn’t been talking all that much, in the six months before his death. That was news. They’d been in a detached phase, she said, an unfaithful phase, on both sides, and maybe they’d been on their way out as a couple. “I’ll never know, will I?” she said. Now she was having one-way conversations with him across the great divide, still waiting for the worst not to be true. Now she had things to tell him.

And she had dreams. In one dream Schuyler kept saying they were late for a party, they had to rush to get there, but they couldn’t get themselves out of the apartment. They kept remembering gas jets left burning, sinks filling with water, urgent phone calls they had to make. She knew it was a trivial dream to have, under the circumstances, but it had its own torment and dread. And the party was definitely going on without Schuyler; that part, she said, was right.

WATCH: Niall Ferguson on the Increasing Levels of Human Incompetence When Handling Disasters 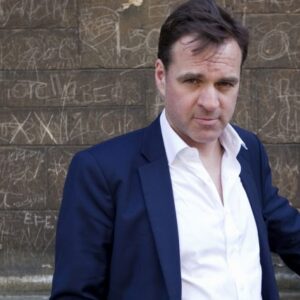 WATCH: Niall Ferguson on the Increasing Levels of Human Incompetence When Handling Disasters In this episode of Keen On, Andrew is joined by Niall Ferguson, the author of Doom: The Politics of Catastrophe, to discuss...
© LitHub
Back to top