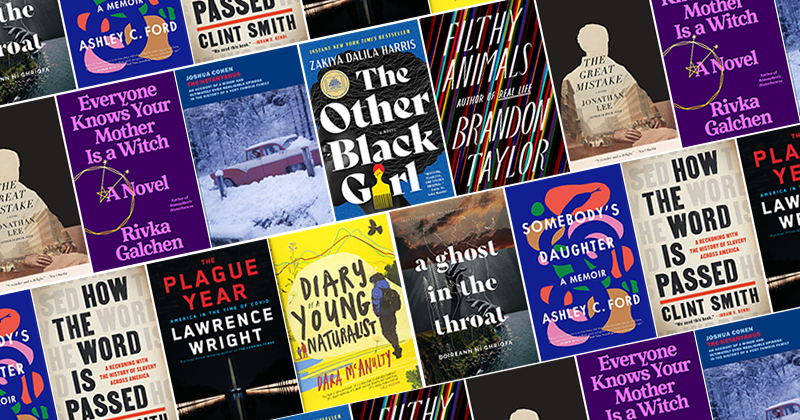 Zakiya Dalila Harris’ The Other Black Girl, Brandon Taylor’s Filthy Animals, Doireann Ní Ghríofa’s A Ghost in the Throat, and Lawrence Wright’s The Plague Year all feature among the best reviewed books of the month.

1. The Other Black Girl by Zakiya Dalila Harris
(Atria)

Read an excerpt from The Other Black Girl here

“The Other Black Girl is about many things—friendship, the humdrum office culture—but its driving pulse is a sharp critique of the publishing industry’s lack of diversity … In the novel, we see firsthand the industry’s uniformity and its harrowing effects on nonwhite staff. Harris’s prose creates a deep realism, allowing readers to experience Nella’s loneliness and isolation at her job … The best satire reveals the skeletons in our closets and guides us to a deeper sense of truth. This is where the book thrives: Harris strategically inserts satire during moments in which characters demonstrate unconscious bias, allowing us to see the nuances of racism. Harris forces us to dwell in these uncomfortable, awkward moments; they linger even after the book has ended … In The Other Black Girl, Harris creates a space for black writers and writers of color to tell their own stories in their own way.”

“[An] impressive first collection … Although each of the stories here can be read as a stand-alone work, over half of them are perhaps best described as chapters of a novella-length piece … the cloistered world of student life offers Taylor the perfect canvas for the emotionally charged interplay between an insular cast. Most significantly though, these stories provide further evidence that intimacy is Taylor’s great subject … moments of connection that pepper these stories feel so miraculous. But welcoming relief involves acknowledging the true depth of the void that’s been filled … Taylor also dares to show us how violence can be an act of terrible intimacy.”

3. Everyone Knows Your Mother Is a Witch by Rivka Galchen
(FSG)

Listen to an interview with Rivka Galchen here

“The comedy that runs through Everyone Knows is a magical brew of absurdity and brutality. Galchen has a Kafkaesque sense of the way the exercise of authority inflates egos and twists logic … There’s real sorcery here, but it arises only from the way Galchen fuses ancient and modern consciousness … testimonies present a jaw-dropping catalogue of anxieties, irritations and non sequiturs—all the various ways human beings can make themselves believe whatever they must to avoid acknowledging that they’re afraid, that they’re jealous, that they can’t control their lives. Late in the novel, all the most bizarre accusations are enumerated in a list that could pass for Renaissance Twitter … The fate of Kepler’s mother is a matter of historical record, but Galchen arrives at something the facts can’t catch: The exhaustion, the bone-weariness of fighting such misogyny year after year. It’s enough to break a weaker person.”

“…a novel so comprehensively steeped in American literary history that it comes as something of a surprise to find that its author is a fortysomething from Surrey. It’s as if Lee…has distilled more than a century of American letters into a single book. There’s Fitzgerald … There’s Hemingway in the muscular lyricism of the prose; Sherwood Anderson and Steinbeck in the beautifully drawn portraits of rural America; there’s the restraint of Henry James in the sinuous sentences; and then there’s a host of lesser-known writers who took for their subject turn-of-the-century New York and the riotous excesses of early capitalism: Theodore Dreiser, Frank Norris and Upton Sinclair … a book of extraordinary intelligence and style, written in language at once beautiful and playfully aphoristic. It’s a novel whose protagonist—decent, dignified, wounded—will live long in the mind of those that read it, a novel that delivers wholeheartedly on Lee’s early promise.”

5. The Netanyahus by Joshua Cohen
(New York Review of Books)

Listen to an interview with Joshua Cohen here

“Mr. Cohen has fictionalized the episode to brilliant effect, producing a novel that is in part a seriocomic portrayal of postwar American domesticity, in part an ideological origin story, and most of all a parable dramatizing the intra-tribal disputes that divided Jews in the wake of the Holocaust … Mr. Cohen proves himself not just America’s most perceptive and imaginative Jewish novelist, but one of its best novelists full stop.”

1. How the Word Is Passed: A Reckoning with the History of Slavery Across America by Clint Smith
(Little Brown and Company)

Listen to an excerpt from How the Word Is Passed here

“In rich, evocative language, Smith synthesizes first hand research, textual sources, and interviews as he weaves a lyrical and precise tapestry of the truth of America’s past that many would like to continue to hide … The detail and depth of the storytelling is vivid and visceral, making history present and real. Equally commendable is the care and compassion shown to those Smith interviews—whether tour guides or fellow visitors in these many spaces. Due to his care as an interviewer, the responses Smith elicits are resonant and powerful … Smith deftly connects the past, hiding in plain sight, with the today’s lingering effects…”

2. A Ghost in the Throat by Doireann Ní Ghríofa
(Biblioasis)

“… a powerful, bewitching blend of memoir and literary investigation … Ni Ghriofa is deeply attuned to the gaps, silences and mysteries in women’s lives, and the book reveals, perhaps above all else, how we absorb what we love—a child, a lover, a poem—and how it changes us from the inside out … heated and alive …This is not dusty scholarship but a work of passion.”

“Somebody’s Daughter is the heart-wrenching yet equally witty and wondrous story of how Ford came through the fire and emerged triumphant, as her own unapologetic, Black-girl self … Ford’s brilliance as a writer, her superpower, is a portrayal of her mother—who remains unnamed—that is both damning and sympathetic, one that renders this complicated older Black woman’s full humanity … Ford powerfully captures the complicated mix of meanness, frustration and obsessive mothering familiar to so many Black daughters … Ford found her voice as a writer, and that helped her see that she’s not just somebody’s daughter: She’s somebody.”

4. The Plague Year: America in the Time of COVID by Lawrence Wright
(Knopf)

Read an excerpt from The Plague Year here

“… lean-limbed, immersive … Chapter by stellar chapter, Wright charts COVID-19’s arc … Wright is at his commanding best, though, when he places the pandemic in historical context—his detours into the Black Plague and the 1918 Spanish flu are narrative marvels—and in his portraits of the players … He threads The Plague Year with delightful transatlantic calls to Gianna Pomata, a former Johns Hopkins professor now retired to her hometown of Bologna. Pomata has long studied the transformative impacts of pandemics on economies and social orders. She sees a silver lining in COVID-19, noting, with Italian brio and humor, that innovations evolve from global calamities. One could say the same about Wright’s arresting book, birthed by a plague year but rich with peerless reportage and incisive critique.”

5. Diary of a Young Naturalist by Dara McAnulty
(Milkweed)

“… a remarkable book, the most moving memoir I have read in years. Now 17, Dara wrote it when he was 14, and his knowledge at such a young age amazed me—not just his understanding of the natural world, which is immense, but of literature, of Irish history and legends, of music and politics. His writing is clear and honest, laced with analogies from nature … What drives this book is Dara’s fierce passion—for his family, for the out of doors, for sharing his knowledge and enthusiasm with others … And now as I walk through my neighborhood and look at the many glorious, tangled gardens planted for pollinators and bees, or the manicured lawns with signs warning of chemical weed killers, or the great-horned owl family that roosts in the pines, I try to look with Dara’s eyes and I see it all new.”