And on Literary Hub: The 99 best book covers of the year (for books by P.G. Wodehouse) · Is silence a tool, weapon, gift, or myth? On John Cage, muzak, noise, and torture · Booksellers from across the country tell us the 25 best books of the year · Doctors who tell stories: on Oliver Sacks and narrative medicine · Our staff shelf: Literary Hub’s best books of 2015 · Rebecca Solnit explains to us how men explain Lolita to her · So you’ve decided to launch an imprint: Emily Gould and Ruth Curry on Emily Books’ new print adventure · Bonnie Jo Campbell on strong women and life in the margins

Plus, all this week we excerpted the best books of the year: Adam Johnson’s “Nirvana” from Fortune Smiles, Fates and Furies by Lauren Groff; Sally Mann’s Hold Still; Helen Macdonald’s H is for Hawk; and Angela Flournoy’s The Turner House 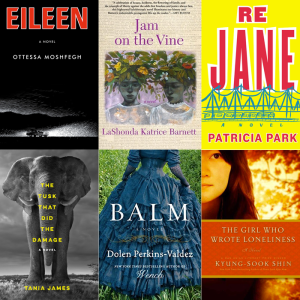 Recently I wrote this list, and many of you shared it. Thank you. At least one commenter asked why there weren’t any women...
© LitHub
Back to top