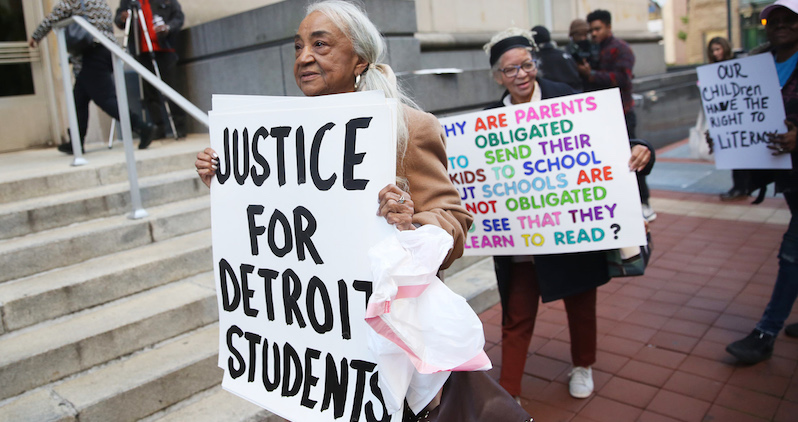 It’s a big week for literacy advocates all around the country in light of a federal appeals court ruling that enshrines the constitutional right “to a basic minimum education.”

The U.S. 6th Circuit Court of Appeals handed its precedent-making decision down in a 2-1 ruling on Thursday after lawyers in Michigan successfully argued that the state was denying education to Detroit Public School students, in violation of the 14th Amendment.

When the civil lawsuit was introduced last fall (Gary B v. Whitmer), a number of stories ran about the subpar conditions that have long-plagued Detroit’s public school system: books and teachers all but absent in some classrooms, awful building conditions, untenable temperatures, actual vermin running wild.

Legal experts have said what made this case unique was the argument that a state itself—in this case, Michigan—was violating the Equal Protection Clause by excluding students from a free public education system.

The court was careful to specify that “basic minimum education” does not imply “the quality that most have come to expect in today’s America.” Rather, the ruling continued, “the right only guarantees the education needed to provide access to skills that are essential for the basic exercise of other fundamental rights and liberties, most importantly participation in our political system.”

Speaking to the Detroit Free Press, Detroit Schools Superintendent Nikolai Vitti  said, “This decision does something that even the U.S. Supreme Court has not done. It finds that there is an inherent right to a minimum education.  And, the decision says that the state of Michigan can be held liable for violating such constitutional right.”

This pretty thrilling decision comes after years of political hand-wringing, including a notorious 2018 suit dismissal by U.S. District Judge Stephen Murphy, who said that although literacy was “of incalculable importance” and essential to “participating meaningfully in civic life,” it was nonetheless not a “fundamental right.”

As a result of the ruling, the case will now be sent back to Murphy.

The decision does not apply nationally—for that to happen, the case would need to reach the Supreme Court—but solely to the 6th Circuit: Michigan, Ohio, Kentucky, and Tennessee.

We’re still far from the stage of practical implementation and enforcement of this decision, but the ruling is certainly a victory for students, teachers, and all those administrators, librarians, literacy advocates, writers, and more who have supported them along the way.