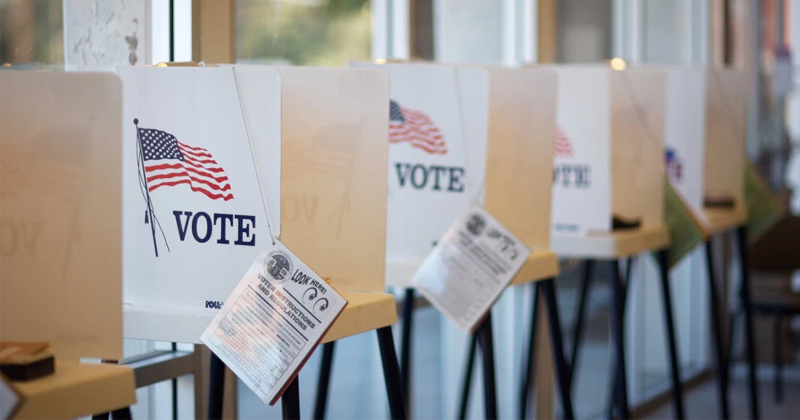 In a realpolitik overrun by bitter partisanship, civic apathy acts as a kind of dark matter: pervasive, invisible, and virtually impossible to quantify. It is, in essence, a form of privilege—the privilege of negligence—that arises in a population insulated from foreign threat and domestic hardship.

One of the most common electoral symptoms of this privilege is the so-called protest vote, in which citizens register their disgust for “the system” by voting for a candidate they know can’t win. I make no excuses here for the ills of our modern two-party system, which amounts to a corrosive duopoly. I understand the desire to support the candidate who most closely aligns with your values.

But it’s not idealism that motivates many protest voters. It’s cynicism.

Consider my friend Josh. He’s a Harvard-educated computer scientist who works for a non-profit research institute funded, in part, by federal grants. His wife is a public school teacher and they have two daughters in middle school.

We don’t talk much about politics, because Josh is one of those upbeat guys who considers the subject a bummer. From what I could discern, he supported John Kasich and viewed Trump as a joke. The last time I saw him before the election,

he announced that he’d cast an early ballot for “the drunk and the stoner.” He meant the Libertarian candidates, Gary Johnson and William Weld. Was he familiar with Johnson’s policy positions? No, he told me. He voted for Johnson as a protest.

When I asked what that meant, he explained that the two-party system was broken and that Clinton would be a disaster because she’d be unable to get anything through Congress with the GOP in control of the House. I asked if voting for Johnson was, in a sense, endorsing the Republican strategy of intransigence, as well as gerrymandering, by penalizing Clinton for the actions of her opposition. He shrugged. We live in Massachusetts. What did it matter anyway?

The next time I saw Josh, a few days after the election, a tense silence prevailed. We were driving to the gym near his work. Josh eventually confessed to being surprised by how upset his wife and daughters were after the election. I resisted the urge to point out the many reasons why that might be. Instead, I pressed him on one specific area of policy: climate change.

Josh argued that nobody knew yet what Trump would do. “He called climate change a hoax,” I said. “He promised

to pull out of the Paris Accord. He’s already begun stocking the Environmental Protection Agency with climate change deniers.”

I took a deep breath. “Come on, man. You’ve dedicated your life to science. You know the risks of ignoring climate change. You’ve got two young daughters. This stuff should matter to you. If we’re going to have a morally and intellectually serious discussion about the candidates, it has to be about their policies—”

“See, this is why your side lost!” Josh snapped. “That right there! That elite attitude! You’re calling Trump supporters idiots. It’s condescending.”

“What are you talking about?” I said. “I didn’t say a thing about Trump supporters. I’m talking to you.”

“Elite had become a kind of code word, one that right-wing politicians and pundits and even wealthy Harvard-educated scientists deployed to ward off the horrors of having to discuss policy.”

In two decades of friendship, I’d never heard Josh speak so sharply. He was pissed at me for guilt tripping him. I was pissed at him for trivializing the election. But what struck me as we lapsed into another silence was the word he had used to convert his guilt into accusation: elite.

I’d never heard him use this word before, not even once. And yet it had leapt from his mouth reflexively, a little belch of punditry. Elite had become a kind of code word, one that right-wing politicians and pundits and even wealthy Harvard-educated scientists deployed to ward off the horrors of having to discuss policy. Anyone who wanted to talk about that stuff was being elite and being elite meant you were talking down to someone.

Trump used the word to condemn anyone or anything too serious, from the New York Times to President Obama to climate scientists. In this sense, elite served the same basic function as politically correct, the term he used to bludgeon any sustained consideration of bigotry. They were deployed not just to dodge a particular discussion, but to recast cynicism as a form of wisdom, and moral negligence as a form of martyrdom.

Josh is maybe the nicest guy I know. He felt bad for snapping at me. Maybe, to some extent, he felt bad for his vote. Whatever the reason, toward the end of our drive, he confessed to something I’d never known about him. After the financial crisis of 2008, he had been fired abruptly from a previous job and remained unemployed for several months. His daughters were toddlers, his wife had quit her job, and he was

just a few years into a mortgage on a new home. During this period—which I remembered as deeply anguishing for Josh—Obama’s stimulus package had footed most of the bill for his family’s medical insurance.

What Josh did not mention was that every Republican in the House had voted against the American Recovery and Reinvestment Act. If the GOP had had the votes, they would have blocked the stimulus altogether, leaving Josh with a nasty choice: pay thousands for health insurance or lose coverage.

Yet Josh felt no particular gratitude toward Obama, or the Democrats who had fought for the law. Nor did he feel any impetus to acquaint himself with the wildly divergent policy positions of the 2016 presidential candidates. Less than seven years since the stimulus saved his bacon, his faith in the government’s capacity to aid and comfort families like his own had completely evaporated.

Josh took his grievances seriously but not his vulnerabilities.

In a sense, Trumpism was the inevitable outgrowth of this mentality. Traditional politicians attempt to win support by selling a legislative program that will produce specific benefits: jobs or tax cuts or ideologically desirable judicial appointments. Trump was only nominally interested in such results. His central argument was that politics—the smug pieties, the arcane rules, the gentle norms—was bullshit. In other words, he was a protest candidate. Many of those who

voted for him were voting against their own curdled perceptions of government.

A few days after the election, for instance, I found myself engaged in a brief conversation with a well-heeled neighbor. She couldn’t understand why everyone was so freaked out. “The Obamas never really did anything for me,” she said. “They never looked out for the middle class. They helped the poor, the rich took care of themselves, but my daughter didn’t get any help with college. And when my parents died there was barely anything left.”

I didn’t know what to make of these complaints. Was she angry about the estate tax, a measure that applied only to inheritances that exceeded five million dollars? Did she expect Obama to defray the tuition at the private college her daughter attended?

“And why didn’t Obama visit Israel?” she continued. “He didn’t go there once during his whole time in office. What does that say?”

I had a distinct memory that Obama had gone to Israel—in fact, he visited twice—but I kept my mouth shut. I was in that peculiar psychic space, now so common in our republic, where one senses not just a divergence of political belief but the impossibility of coherent discourse.

“Many of those who voted for [Trump] were voting against their own curdled perceptions of government.”

What was this woman really saying in the end? She was saying that Obama had failed to honor a bargain

whose terms she, as a citizen, felt free to shift according to her whim. It was an argument of such subjective force, and ingrained entitlement, as to be impervious. At the same time, she was being utterly sincere. This was what democracy felt like to her. She saw no relationship between her life and the election beyond the lazy hope that the new guy would give her more stuff than the last. She felt no need to evaluate the veracity of the claims made by or about either candidate, the policies they proposed, or the likely consequences of these policies. This negligence didn’t make her exceptional. It made her typical.

My brother-in-law explained to me that Obama’s presidency hadn’t affected him because he works for FedEx, which offers private health insurance. He appeared unaware that the Affordable Care Act required employers to provide numerous essential benefits such as preventive care. Nor had he thought much about what his life would have been like if the Obama administration had not pursued policies—in the face of vehement opposition—that resuscitated the banking sector and the housing market, that his company would have been one of the first hit, that he might have lost his job, that he never would have been able to build his new home. My brother-in-law is a smart guy who had somehow come to believe that only people insured under Obamacare had a stake in his presidency.

And what of Obamacare recipients? Debbie Mills, a small business owner in the town of Corbin, Kentucky, told a reporter from Vox.com that she stopped buying private health insurance more than a decade ago, because the premiums had become too expensive. When Obamacare became available in her state, she signed up and received a huge tax credit, which allowed her to pay $115 monthly for a plan that covered her, her husband, and her teenage son. This insurance became life saving in 2016, when her husband went on the waiting list for a liver transplant.

Over the course of the campaign, Trump pledged to repeal Obamacare daily. Mills knew this would have devastating consequences for her family. She voted for him anyway. She said she was drawn to Trump because he was a straight-talking businessman who would shake up Washington and bring jobs to her town. She simply chose not to acknowledge his straight talk about killing Obamacare.

After the election, the Vox reporter visited Mills. Their interview quickly turned into a kind of therapy session, with the reporter having to reassure Mills that she and her sick husband wouldn’t be kicked off their insurance—at least not immediately. “You’re scaring me now,” Mills said. “I’m afraid now that the insurance is going to go away and we’re going to be up a creek.”

It would be easy to accuse Mills of being a sucker, or any of the other imprecations elitists love to lob. A gentler diagnosis is that she represents our national habit of taking our grievances seriously but not our vulnerabilities. 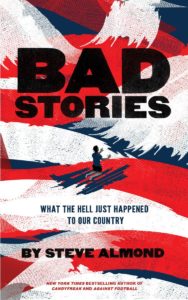 From Bad Stories: What the Hell Just Happened to Our Country. Used with permission of Red Hen Press. Copyright © 2018 by Steve Almond.

Steve Almond is the author of eleven books of fiction and nonfiction, including the New York Times bestsellers Candyfreak and Against Football. His essays and reviews have been published in venues ranging from the New York Times Magazine to Ploughshares to Poets & Writers, and his short fiction has appeared in Best American Short Stories, The Pushcart Prize, Best American Mysteries, and Best American Erotica. Almond is the recipient of grants from the Massachusetts Cultural Council and the National Endowment for the Arts. He cohosted the Dear Sugars podcast with his pal Cheryl Strayed for four years, and teaches Creative Writing at the Neiman Fellowship at Harvard and Wesleyan.
http://www.badstories.org

How Should a Literary Adaptation Be? We Asked the Critics for the Answer 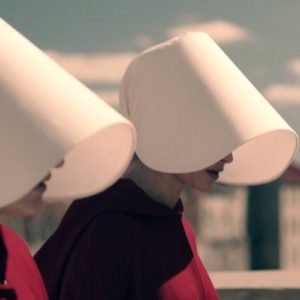 How Should a Literary Adaptation Be? We Asked the Critics for the Answer

“What bothers me is when people adapt a book who seem to not have understood the book,” says Matt Zoller Seitz, TV critic...
© LitHub
Back to top
Loading Comments...