The Year in Literary Adaptations (And What’s on the Horizon)

2016 was another big year for literary adaptations onscreen. There was the requisite iffy stuff—the Ben-Hur redux (mmmm), Ron Howard’s Inferno (pretty bad), Eastwood’s Sully (bad but I enjoyed it), the Billy Lynn’s Long Halftime Walk movie that Slate called “unwatchable” and others seemed to be into just fine. For the most part, however, the last twelve months have seen a lot of lit material hit for filmic home runs, like Light Between Oceans (still searching for my Island Janus), Spielberg’s BFG (WTF? Did this actually have a theatrical release? Feel like I missed it . . . sounds good), Moonlight, Moonlight, Moonlight, Arrival, Moonlight, Elle, Westworld (adapted for HBO TV from an unfinished Crichton screenplay). The elephant in the room here is probably Girl On The Train, which, after the acclaim and consequence of older sister, Gone Girl, seemed poised to really shine—and didn’t exactly. But regardless of whether that film deserves a 4 or a 6 or an 8% on Rotten Tomatoes, what’s clear from the overall critical and box office successes of the above slate of films is this: there’s an embracing audience, big business, awards, and cultural cachet for adaptations. So much so that, as dedicated Deadline readers will recall, the year’s blowout deal saw the film rights to David Grann’s novel Killers of the Flower Moon sold at auction for a cool five million.

Kevin Cotter is Director of Literary Affairs at Anonymous Content, the buzzing production company behind projects like Spotlight and Mr. Robot. He tracks and pursues title options in fiction, non-fiction, graphic novels, theatre, podcasts, and whatever else might translate to quality scripted content. We had the below conversation via FaceTime about this year’s adaptations, and what’s on the horizon.

Full disclosure: Kevin is also my occasional tennis partner. His game’s pretty good overall, very consistent, but his backhand could use a little work . . .

Peter Nowogrodzki: So what’s the birds eye view of the lit to film landscape?

Kevin Cotter: I feel like every year—at least for the past several years—there are more and more films based on some underlying material—not necessarily a book, Moonlight and Fences were plays. Girl On the Train was a book. Elle was a book, Oh… by Philippe Djian—I didn’t read it. And, unless the titles are exactly the same between the original text and the film, or if the original’s a best seller, you don’t always get a lot of author recognition from the movie. Did you see

PN: Yeah, I saw it on Thanksgiving.

KC: I thought it was awesome. I’d say that was one of the year’s five best—even though it’s problematic in some ways, too. It’s made by a male director, Paul Verhoeven, who is incredible, but still—he’s telling a story about rape and questioning what consent is or is not. But I liked it. I thought the film played with genre is a cool way—it becomes a comedy of manners during the dinner party scenes. Then it’s an outright comedy when the lead, Isabelle Huppert, is flippant and treats people poorly. But then, obviously, with the rape the movie gets very serious. Those sorts of genre transitions were jarring. All within the same story. Ultimately I think the whole movie is about power—how women, specifically, can or cannot exercise power.

PN: At times I missed that it was satirical. It wasn’t too earnest.

KC: Yeah, I liked that. I think overall the adaptations I liked best this year were ones that were unique and not just the bestseller du jour. Deadpool was really cool. There was a comic book flavor that actually came through in that movie—which doesn’t always happen. The movie did a great job replicating the kind of narration that you get in this particular kind of visual literature.

Moonlight was really great. I still need to see Arrival, based on the Ted Chiang story. I read your interview with him—had you read his story before you watched the movie?

PN: Yes. In a way I felt the film’s attempts to stick too much to Chiang’s original story crippled it a bit. The ending—the lead character’s re-integration into family life in a post-alien world—was, in my opinion, the film’s weakest piece. I think it was an homage to Chiang’s original story, which plays with a similar conceit via narrational tense changes—the past tense alien story is bracketed by present tense bits about the protagonist’s child. I just think maybe the film should have dropped that narrative container entirely.

KC: Yeah, I have to catch up on that—and a lot from this year. Like Miss Peregrine’s Home for Peculiar Children, Tim Burton’s latest movie. I really wanted to see that. Seemed good. It’s about children with, not necessarily super powers, more like oddities. One floats away. It’s strange. It was this small independent publisher’s YA novel—Dutton picked it up, but the original publisher is Quirk Books, an independent publisher in Philadelphia that publishes about 25 books per year—but became this big bestseller.

PN: Anything unexpected from the year?

KC: I was a little surprised by how The Girl On The Train did. It’s been the best-selling book in the world for a few years—and remains it. And it didn’t bowl over competition at the box office. It did well, but not exceptionally. That was sort of surprising.

KC: There’s for sure more Girl On The Train-like stuff coming out. I’m really looking forward to seeing the Sasha Gervasi adaptation of The November Criminals by Sam Munson. He’s a really good writer, but the novel’s not plot-heavy. There’s a lot on the page that feels at home on the page—so you have to wonder how it will become a film. I’m curious, especially, to see how the tone translates onto the screen. It’s a dark comedy about a high school student who is investigating the murder of one of his classmates, and gets more and more embroiled in it. It has a strong sense of place, set in the underworld of Washington, D.C., which is a city we haven’t really seen depicted in a non-political way.

PN: Any other projects that you are personally excited about, or any that the industry is clamoring over?

KC: Hidden Figures is coming out next year. That’s a great book, just published this fall—and should be a big, important movie. And it’s also indicative of a trend that we’ve seen happening for the last few years: films about “female firsts.” This movie’s about a team of black women scientists and mathematicians working for NASA. They were groundbreakers in that field.

KC: Yeah. There are a lot of adaptations coming up on T.V., too. Like Liane Moriarty’s book Big Little Lies, which Reese Witherspoon’s company Pacific Standard and Nicole Kidman’s Blossom Films did for HBO with Witherspoon and Kidman starring. It was a good book; good commercial fiction. And the adaptation looks really good, too. I’m curious to see it.

Live By Night—do you know that movie? With Ben Affleck? Dennis Lehane—who wrote Mystic River, Gone Baby Gone, and Shutter Island—also wrote Live By Night, which is co-produced by Affleck’s company Pearl Street and Leonardo Di Caprio’s Apian Way. It’s about a bootlegger and rumrunner in the 20s and 30s.

PN: Okay, cool. So much to look forward to!

KC: Yeah, right? I’ll be in LA next week—gonna try to get my rackets re-strung by the time I’m out there. 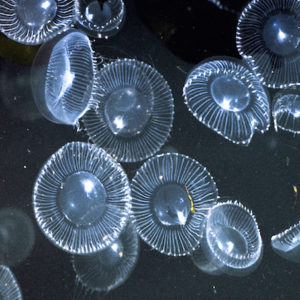 David Gutkowski is close to wrapping up his ninth consecutive annual list of “Best of 2016 Books” lists, with 1,092 books...
© LitHub
Back to top