Inferno is Ron Howard’s latest attempt to breathe cinema’s magical, animating life-force into the cold corpse that is Dan Brown’s body of writing.

Howard’s film managed to debut at #1, grossing some $5.5 million dollars on its opening night (October 28)—but then, in only one week, reality kicked in. Box office returns plunged by 66.6 percent, a funny little statistical coincidence that is maybe as interesting as anything that happens in the screenplay.

But wait, I know what you’re thinking . . . Is there any actual relationship between Dan Brown’s Inferno and Dante Alighieri’s Inferno, other than the shared title and the authors’ shared birth sign (Gemini)? Who would win in an arm wrestle? Why aren’t we talking more about Moonlight? Or the election?

To get to the bottom of these questions, poet and academic Mary Jo Bang kindly took in the film at 6:30 on a Friday night in Missouri. She’s shared her thoughts below.

Bang, who turned 70 just a few days before Inferno’s October release, is a celebrated thinker and writer. She won a Guggenheim Fellowship in 2004, and her collection of poems, Elegy, won the National Book Critics Circle Award for Poetry in 2007, and was a NY Times notable book in 2008. In 2013, Bang published a very contemporary translation of Dante’s Inferno, which Eileen Myles called “the book you want to be holding in your hands” as End Times approach.

Disclaimer: While she’s dedicated much time and energy to reading, interpreting, thinking about, and researching Dante, Bang stressed via email that she is “absolutely NOT a Dante scholar.” She used existing translations of his writing to complete her translation—“there are over 200 published versions and I used between 4 and 20 depending on the line.” Her area of expertise, she clarified, is contemporary poetry, which she teaches as a professor at Washington University in St. Louis.

Bang was standing in her living room when we spoke on the phone. “First,” she explained of the film, “I watched it like an anthropologist. How is Howard going to use Dante? Which pieces is he going to use? But the way those pieces were used were really not satisfying—Dante has basically nothing to do with this.”

The film pits Tom Hanks—who plays Dan Brown’s fictionalized Harvard University professor of religious iconology and symbology, Robert Langdon—against a scheming, evil, TED-talk lecturing Silicon Valley type, aka Elon Musk, who’s decided to release a deadly virus in order to cull the world’s bloated population. Langdon, who opens the movie on a hospital gurney with brain damage and memory loss, is run through a series of puzzles (are they puzzles?) to try and figure out what’s going on. “It was really just a scavenger hunt,” Bang recalled. “You just find one thing and that gives you the next thing.”

“They misquote, they send you to the wrong Canto, they really don’t care about using Dante’s original, actual text.” At one point Langdon reports that, according to Dante, “the worst evil is not standing up for right”—in fact, Bang corrected “in the Inferno, the people who don’t stand up for right are merely in the foyer of hell. They never go across the river with Charon,” to hell proper. “They just stand on the shore and cry tears of blood that drip down onto the ground and into the mouths of maggots.”

Bang’s biggest beef came at a moment towards the film’s end, when Langdon evokes Dante’s supposed muse Beatrice. He compares the “love they never have” to his own failed relationship with a character named Elizabeth Sinskey, head of the World Health Organization and, apparently, Langdon’s lifelong love interest. The Beatrice-as-beloved angle is particularly bothersome to Bang, because she believes that Dante himself used Beatrice as a kind of cypher. “She seems to be the driving force of the story for many contemporary readers—but if you go back to the commentary, which dates back all the way to the 1370s lectures at University of Bologna, many thinkers tried to interrogate who this woman figure is.” Dante had a wife, Gemma Di Manetto Donati, though her name never occurs in any of his writing. But scholars have found a woman named Beatrice who lived in Florence. She was a noble lady, the daughter of a family friend of Dante’s father

Frustrated with the film’s thin interpretations, and failing to find ample literary references for scrutiny, Bang imagined herself to be someone else in the audience, “your average viewer, you know, someone who is not a literature professor.” And that’s when she “began to see how the movie was truly failing, for both me and other viewers. It must be mystifying to someone who’s never read Dante, or doesn’t know who Dante is—which is most people in America.” Nearly everyone under the age of 20, she lamented, associates the title with a popular video game.

“What happens with the Da Vinci Code is different,” she added, “because everyone has a familiarity with Da Vinci’s Last Supper. Most Catholic homes have a picture it—everyone knows it. Few people I’ve talked to outside of academia and poetry know what the Inferno is—or who Dante is. That’s a major problem for movie, Howard’s linking the entire plot to something that people don’t have access to. There’s probably a lesson to its failure. It’s fascinating that Hollywood never seems to learn the lesson. I just don’t understand Hollywood anymore.” 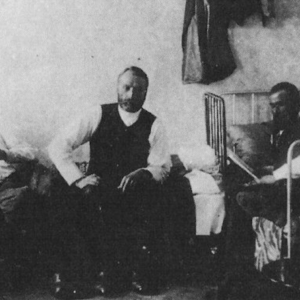 Emily Raboteau collects the reactions of our children to President Donald Trump. | Literary Hub A new poem by Claudia...
© LitHub
Back to top