The Man Who Made Millions From Old Comics in a Closet

How a Life-Changing Collection Almost Ended Up in a Bin

There’s an age-old lament among collectors of a certain age, and it goes like this: “My mother threw away all of my comic books, and they would be worth a fortune now.” (A variant form of this complaint might refer to baseball cards.) In many, perhaps most cases, the statement is clouded by a haze of childhood nostalgia, with maybe a sprinkle of greed. However, it is important to note, the last decade or so has witnessed a massive inflation in comic book values—and the reporting of those values.

For example, Action Comics # 1—the first comic to feature Superman—which originally sold for 10 cents, has become a seven-figure item if found in pristine condition. Batman’s first appearance, heralded in Detective Comics #27, just tipped over the $1 million mark in recent years, while Amazing Fantasy #15 (Spiderman’s debut), Flash Comics #1, Marvel Comics #1, and All-American Comics #16, starring Green Lantern, fetch a solid six figures. Why this market has exploded to such an extent is difficult to pinpoint, and those who cover the rare book market are frequently perplexed by these prices, but surely it is a combination of factors: boomer nostalgia; young collectors looking to buy “cool” cultural artifacts; a reevaluation and better appreciation for the talents of writers and illustrators such as Stan Lee, Steve Ditko, and Jack Kirby; immensely popular Comic-Con events that attract hobbyists; and the institutionalizing of comic collecting, vis-à-vis the Museum of Comic and Cartoon Art in New York and the Cartoon Art Museum in San Francisco. Additionally, in comic book collecting, as in coin collecting, condition is paramount, and there exists a graded system for determining condition. Each comic is sealed in plastic—known as “slabbing” or “slab mounting”—to avoid damage once it has been certified, which makes the idea of investment tenable.

Things really started heating up in 2010, when the Caped Crusader brought in $1 million and was swiftly beat out by the first Superman for $1.5 million. Then, in 2011, actor and comics collector Nicolas Cage sold his Action Comics #1 for $2.1 million, making headlines in Hollywood and beyond. In August 2014, a copy of the same comic, of which fewer than 50 unrestored copies are thought to exist of its initial print run of about 200,000, broke a world record when it sold for $3.2 million.

In 2012, at the whirring center of this hyperactive hive, Heritage Auctions in Dallas made a startling announcement: it was offering more than 300 comic books from the heretofore unknown collection of a Virginia man named Billy Wright. Whether Wright had the Overstreet Comic Book Price Guide on hand—indeed, whether he had any idea at all about the immense value of his comic books—is a mystery, according to his great-nephew Michael Rorrer. Wright died in 1994 at the age of 66. Since then, his comics had been carefully stowed in a basement closet.

Which is where Rorrer inadvertently found them in 2011 when he and his mother, Lisa Hernandez, traveled to Martinsville, Virginia, to clean out the home of his great-aunt, Wright’s wife, who had recently passed away. They planned to take what they wanted and liquidate the rest at an estate sale. A moving truck would convey their inheritance back to Texas, where Hernandez lives, and, from there to California, where Rorrer was then living.

Rorrer remembered his great-aunt and great-uncle as nice folks. Wright, he recalled, had a well-paying job as a chemical engineer, but they weren’t rich. He described them—not entirely seriously—as “hoarders,” because of all the stuff they had accumulated. Hernandez said that’s because Wright was an only child, and his mother had preserved his childhood games, toys, and books. (Score one for the mothers!) The comic books likely fell into this category, alongside his wind-up Popeye the Sailor Man.

When the thirty-something Rorrer was a child, his great-aunt had mentioned the comics to him once, but it wasn’t something he pursued. It only came back to him when he opened up the closet in her finished basement and saw a stack of comic books and vintage children’s toys. He picked up a few of the comic books, leafed through them, and put them into two boxes—one for himself and one for his brother—to be transported back home. They finished packing up, and Rorrer returned to California.

Months went by. As arranged, the moving truck trekked from Virginia to Texas to California, carrying crates full of furniture and other mementos. Even after they dropped off Rorrer’s portion, containing half of the comic books, at his house, he wasn’t quick to unpack them. But he did share the news of his eccentric heirlooms with his friends at work, and one of them said, “Wouldn’t it be awesome if you had the first Superman or something?” Thus prompted, Rorrer went home that night with renewed interest.

As he scanned the stash of comics, noting how old they were, he still didn’t feel sure that they were worth anything. He tried a few online searches, and then he called his mom.

“He called me and told me that he thought we had something that was really valuable,” Hernandez remembered. “I said, ‘Well, I kind of doubt it.’”

Wright had never talked about comics or collecting, at least not that his niece or great-nephews could recall, so whether this truly was a childhood collection built dime by dime or something he quietly acquired as an adult is unclear, although the former is widely assumed.

Rorrer emailed some pictures to an auction house, and within a day, he said, Heritage Auctions had contacted him, expressing great excitement over the hoard of so-called Golden Age comic books. At the time, Lon Allen, Heritage’s managing director of the comics category, told the Associated Press, “This is just one of those collections that all the guys in the business think don’t exist anymore.”

In a post-sale press release issued by Heritage, Allen commented, “With just 345 comics in all, [the Wright collection] featured fully 44 of the top 100 comics of all time, many in simply superb condition, which the uniformly great prices reflect.”

But, according to Rorrer, that’s not all. He has retained a selection of Wright’s comic books and is saving them “for a rainy day.” Until then, he said, “I don’t do anything differently. I still go to work every day. I fish a lot . . . I have to say it really hasn’t changed my life.” Hernandez, who recently retired from her position as a process operator at a chemical plant, has done a little traveling and enjoys the fact that Rorrer bought a house in Texas closer to her. She remains grateful that he came out to Virginia to help her clean out the Wrights’ house. She admitted she probably would have chucked the comic books into the estate sale bin if he had not been there.

As in any market, onlookers are waiting to see if the bubble will burst, but with several major auction houses, including Heritage, Artcurial, and Sotheby’s, now holding exclusive comic book and comic art auctions, and independent comic book shops thriving, the popularity and collectability of vintage comics does not seem likely to wane any time soon.

Marlon James is Not the Updike of Jamaica, and Other Revelations 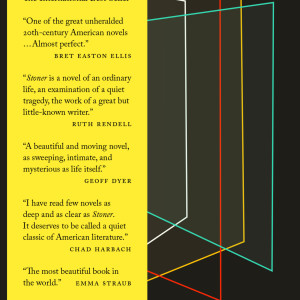 William Stoner entered the University of Missouri as a freshman in the year 1910, at the age of nineteen. Eight years later,...
© LitHub
Back to top