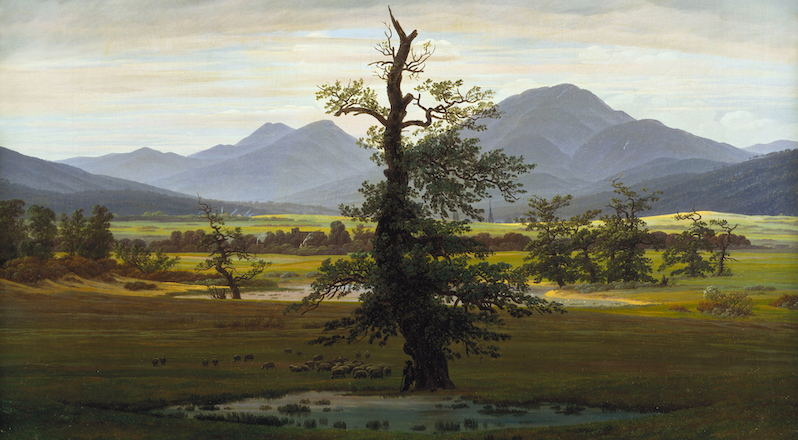 On the Rarity of a Solitary Tree, and How Life Needs Community

Some trees succumb to the imperative necessity to expand their presence to the point of colonizing the least hospitable and accessible lands of our planet. Sometimes they end up, because of quirks of climate or human caprice, settling in places so remote and uncongenial that they find themselves completely alone. Isolated from all other representatives of their own species and, at the same time, forced to survive in apparently impossible circumstances, these single champions of the difficult art of conquest are considered special cases and, as such, are studied to determine the reasons for their uniqueness.

Although the solitary tree can also be seen as a literary topos—symbol of a person who, in spite of everything, resists, indomitable against the arrows of adversity—like so many other of our cultural stereotypes, this one is based on presuppositions that are totally mistaken. Indeed, if you think about it carefully, a solitary tree should not exist. It is a contradiction in terms. Every solitary living being is in some way a contradiction in terms. For there to be life, there must be community with other living beings and, obviously, with other individuals of one’s own species. One of the most tragic fates for any living being is to end up as one of just a few individuals—in some cases utterly alone—on the verge of extinction and with no chance to reproduce the species that it represents.

Solitary trees, perhaps precisely because of their irreconcilable nature, have always fascinated the imaginations of artists, especially painters. One of the best-known paintings of this genre is The Lonely Tree (Der einsame Baum), by Caspar David Friedrich.

Every solitary tree, or any plant that is isolated, far away from its species mates, almost always has an interesting story to tell.

Why this very famous painting is known by this title is beyond me. Painted in 1822 and conserved today in the Alte Nationalgalerie in Berlin, it features in the foreground a tree, probably an oak, that is anything but solitary or isolated. When it comes right down to it, there is nothing solitary in this painting, unless it’s the shepherd leaning against the base of the tree. Some thirty or forty feet away from the starring oak, Friedrich depicts lots of others, and there is even a glimpse of a lovely wood in the background. To be sure, the tree in the foreground is clearly in terrible shape: its trunk is split and crooked; its vegetation shoots up from its base, as happens after severe damage; some of its branches are dead . . . all in all, an oak that has been sorely tested by adversity but nonetheless bravely resists. But at least it is not alone. That much Friedrich allows it. Although his pictorial production certainly does not lack melancholy subjects, Friedrich seems to know that a truly solitary tree is something much more sad and rare than what could be found in the pleasant countryside of Riesengebirge (the mountainous region between Silesia and Bohemia shown in the painting).

There are some truly solitary trees, but not very many. When you happen to come across one, it is always interesting to try to figure out how it got that way. Indeed, every solitary tree, or better, any plant that is isolated, far away from its species mates, almost always has an interesting story to tell. It is not easy to find oneself in this unenviable situation. In impervious places, hundreds of miles from others of their own kind and in climates ill suited to life, these trees survive for unimaginably long periods, testifying to their inexhaustible capacity to adapt to the most extreme conditions. Of the few truly solitary trees that we know about, three of them must be remembered, at least for the places where they live, for the legends that surround them, and, finally, for the contribution they have made to the advancement of our scientific knowledge: the solitary pine tree of Campbell Island, the Tree of Ténéré, and the Tree of Life in Bahrain.

The Spruce Tree of Campbell Island

Campbell Island (Motu Ihupuku in Maori) is one of the most remote places on Earth. With a surface area just a little smaller than Nantucket, it is located about 375 miles south of New Zealand, in the heart of the Subantarctic. It is so far removed from the usual sea routes that it remained unknown to the world until 1810, the year Captain Frederick Hasselborough, in command of the brigantine Perseverence, discovered it during a series of expeditions in the Antarctic regions of New Zealand, promoted and financed by the Australian ship owner Robert Campbell (hence the name of the island). The island, incidentally, did not bring good luck to the captain, who drowned there a few months after discovering it, on November 4, 1810.

For there to be life, there must be community with other living beings and, obviously, with other individuals of one’s own species.

Campbell Island was then, as it is today, completely uninhabited. At those latitudes, one certainly cannot expect a mild climate. The sun shines on the island very rarely, on average 650 hours per year (in New York, or Rome, there are more than two thousand hours of sunshine per year), and for more than seven months out of the year there is less than one hour of sunlight each day. The temperature hovers around 45°F, it rains constantly, and there are more than one hundred days a year when the wind is stronger than sixty miles per hour. The horrible climate is one of the reasons why no human community has ever settled on this little island in the more than two hundred years since its discovery, except for temporary excursions of hunters devoted to the extermination of the local community of seals (a task promptly completed, as there have been no seals there since 1815) and, more recently, scientists engaged in studying the climate and meteorology of the Antarctic regions.

Campbell Island is not a happy place to live for plants and animals. With that kind of climate, it is reasonable to expect that even trees have no chance to survive. Indeed, the vegetation on Campbell Island is typical of the tundra: mosses and lichens, grasses, a few shrubs, and no trees—with one small but important exception: a magnificent exemplar of Picea sitchensis, majestic and solitary dominator of the island’s flora. This tree is so far away from every other plant of its species as to be declared officially by The Guinness Book of World Records “the loneliest tree in the world.”

But how did an exemplar of Picea sitchensis ever get to Campbell Island, more than 120 miles from its nearest species mate, which grows on the Auckland Islands? The responsibility for this extreme botanic localization seems to lie with a certain Uchter John Mark Knox, the fifth Earl of Ranfurly, governor of New Zealand from 1897 to 1904. Lord Ranfurly took his duties as governor very seriously. So at the start of the twentieth century, he embarked on a voyage of exploration of the British dominions in his region. The voyage touched every single little island of the Crown, including Campbell Island, which must not have had a great impact on the governor, since the main impression he took from it was that of a completely unproductive, and thus useless, island.

The existence of a territory, no matter how insignificant, that made not even a small contribution to the magnificent destiny of the empire must have seemed to him an intolerable affront, which called for an immediate remedy. So with one of those offhanded bright ideas that often characterize the activities of governors, in all times and latitudes, Lord Ranfurly decided that the island would become a producer of lumber. He ordered that the inhospitable little island be planted with enough trees to cover it with a luxuriant forest that would furnish the lumber needed for building a whole lot of ships. Even the minuscule Campbell Island would have the honor of helping to keep Britannia the ruler of the waves. The small detail that not a single tree grew naturally on the island didn’t disturb the governor one bit. Without a doubt, the efficiency of British technicians would resolve this little problem. Campbell Island was to become an austral forest. It was decided.

By virtue of a position partially protected from the elements, or just because it was more robust and adaptable than its companions, our tree held up against the winds, the cold, the lack of sunlight.

As often happens, the initial enthusiasm of this grandiose announcement was soon deflated by the lack of any practical action aimed at transforming the island into the forest imagined by the governor. I can almost see those ill-starred experts of forestation on the bridge of the ship, nodding earnestly, taking note of his desires, as the governor indicates with his elegant cane the places he deems most promising for the planting of new trees and suggests the most suitable species. “Down there, those hills declining to the east look to be ideal for fir trees. The lowerlying area to the west, on the other hand, will be perfect for Picea sitchensis.”

Nature, as she tends to do, decided differently. Despite the proverbial efficiency of the British Empire and the planting of several hundred trees, just a few years later there were none left. All swept away, frozen, withered by the impetuous freezing cold winds that blow in from the Antarctic. All but one: our indomitable Picea sitchensis.

By virtue of a position partially protected from the elements, or just because it was more robust and adaptable than its companions, our tree held up against the winds, the cold, the lack of sunlight, the cutting of its branches to be used as Christmas trees by the climatologists who happened to be spending the holidays on the island, and against all the other environmental and human abuses. It grew strong and secure despite everything and everyone. From 1902, the estimated year of its birth, to today, our Picea sitchensis has continued to grow in one of the most isolated places in the world. This last detail is not incidental. By virtue of its isolated growth, in fact, the lone tree on Campbell Island is also a one of a kind for scientific research. Just think; thanks to the results of the studies conducted on this single plant, the suggestion arose to establish the year 1965 as the beginning of a new geological age: the Anthropocene. But let’s not get ahead of ourselves. 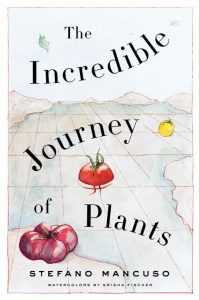 From The Incredible Journey of Plants by Stefano Mancuso, translated by Gregory Conti. Recently published by Other Press.

Stefano Mancuso is one of the world’s leading authorities in the field of plant neurobiology, which explores signaling and communication at all levels of biological organization. He is a professor at the University of Florence and has published more than 250 scientific papers in international journals. His previous books include The Revolutionary Genius of Plants: A New Understanding of Plant Intelligence and Behavior and Brilliant Green: The Surprising History and Science of Plant Intelligence . 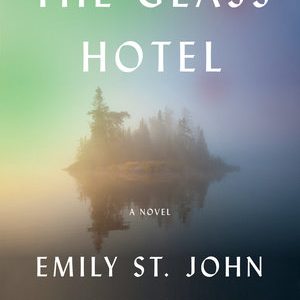 Why don’t you swallow broken glass. Words scrawled in acid paste on the glass eastern wall of the Hotel Caiette, etched...
© LitHub
Back to top
Loading Comments...