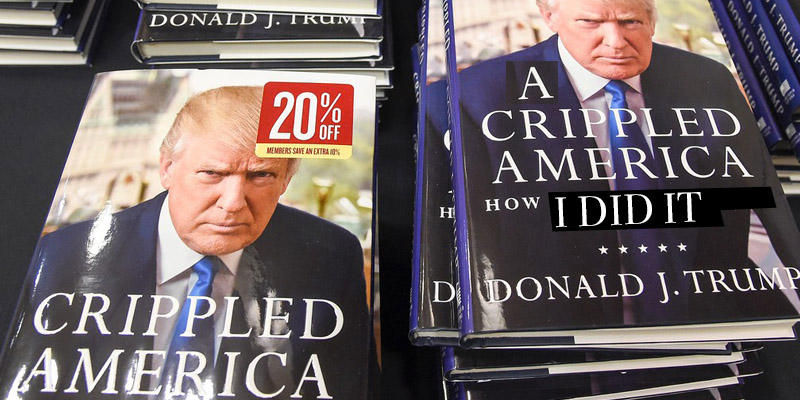 In the last four years, there have been so many Trump books. Many have been massive bestsellers. Many have dominated the headlines, steered the conversation for days. So can you really blame any publishing house for jumping at the chance to publish the outgoing president’s memoir?

Still, perhaps unsurprisingly, there’s already some literary ambulance-chasing going on. “One source familiar with the President” (which, to be fair, could mean anything) has told Page Six that Trump “is being bombarded with book and TV deals that could be worth a staggering $100 million.” The source explained that “book and TV deals are plan-B if he doesn’t win the vote war. Translate 70 million votes into viewers and record book sales. All the anti-Trump books have made big bucks, so this from the Donald is a surefire hit.”

Some publishers have signaled their reluctance to publish a book by Donald Trump, or even meet with him, but Page Six’s “top book source” (honestly, again, could mean anything) said that Simon & Schuster would be “one publisher to watch.” CEO Jonathan Karp has published Trump before (as well as Hillary Clinton and Bob Woodward), and went to his wedding, and as Page Six points out, S&S’s new publisher Dana Canedy even indicated to The New Yorker in July that she would at least consider publishing Trump’s memoir:

Oh, he’s the President. Everyone who leaves the White House has one or more books in them and that becomes part of public history. I think that would be not only appropriate but important. . . it has to be taken on a case-by-case basis. But, in terms of the specific question about the President, every President who leaves office writes their memoirs, their personal history, what have you. And it becomes part of American history. And I don’t see that that’s going to be any different with a Trump book.

Look, publishing is a business, and supposedly buying and selling books like this is how publishers get the money to fund great literary novels that only sell a couple of thousand copies. But in this case… it’s a little like selling your soul to the devil, no? As Maris Kreizman wrote in a piece primarily about John Bolton’s book (and the worrying trend of insiders waiting to get a book deal for their intel instead of being an actual whistleblower):

For book lovers such as myself, the silver lining of Trump’s election was the possibility that readers would be looking for escapism and big ideas in art. So it’s particularly demoralizing to watch publishers package the ongoing debasement of our country as entertainment. If Trump’s best political weapon is being at the apex of an infotainment media system that is consumed like cable news, then publishers aren’t obligated to play his game.

So really, publishers, for the long-term health of the democracy, please don’t give Trump any more platforms than he already has. After all, he doesn’t (can’t?) even read. Plus, imagine how deliciously embarrassing it would be for him to not be able to get a book deal…