Here's what to do with them instead

By now, it’s been more or less proven that Donald Trump doesn’t read. Which some—probably more than a few of you reading this space, but who knows—would say is pretty embarrassing for the president. On the other hand, Donald Trump’s reign has so far been surprisingly good for certain books, as you may have noticed, although of course he promises to be very bad for arts (and other human pursuits) in the long run. Now, a new campaign, organized by Aaron Hamburger and Stacie Whitaker of the Facebook group Leaders Are Readers, is calling for concerned literary citizens to “Bury the White House in Books” on Valentine’s Day—that is, to buy books that they think Donald Trump should read, wrap them, write messages in them, and then send them to the White House, en masse. Happy Valentine’s Day!

“All our recent presidents, Republican and Democratic, have been readers,” Aaron Hamburger told the Huffington Post. “Part of being a leader is knowing what it means to sit in the audience, how to listen, and there’s nothing more humbling and informing than reading, taking in the voice and consciousness of someone else in such a deep way. … This is very much a movement to stand proudly and declare what we are for, namely a republic of letters rather than fear.”

But as much as I agree with the sentiment here, this probably isn’t a very useful tactic. As the Huffington Post’s Claire Fallon points out, sending books to the White House is not going to actually do much. “Neither Trump nor his staff will likely take reading recommendations from a campaign flooding the White House’s mail system with books about Frederick Douglass and the environment,” she writes. “But it could be a serious annoyance.”

Well, sure. But we should be shooting for better than “a serious annoyance.” And it’s clear that intellectualism is not valued in this administration, so it doesn’t make any sense to me to act like it does. This president does not value literature, or journalism, or history. Why does anyone think they can make him understand anything with books? All this man understands is television and Twitter.

At any rate, there are much better things to do with those brand new books than annoy the White House mail room interns and fill their recycling bins (unless—does Trump even believe in recycling? It seems like the kind of thing he would blame China for) with literature.

For instance: why not send a copy of The Handmaid’s Tale—or some other timely book—to a relative who voted for Trump, with a long, heartfelt note inside as to why you think they might enjoy reading it? They are much more likely to take you up on it than anyone in the administration. Hell, why not send a copy of whatever book you’ve recently read and loved to that relative, politically relevant or no? You’ve got a couple years to convince them, after all.

The “Bury the White House in Books” page mentions that these extra book purchases will support the publishing industry and local bookstores—but I have to say that “the publishing industry” isn’t necessarily worthy of your support (it depends on which arm you’re looking at), and purchases will obviously only support local bookstores if people are actually buying their books there—but instead of throwing away your hard-earned money and your hard-earned books on a worthless, illiterate idiot like Donald Trump, why not donate them to a local prison book program? Or to under-resourced libraries? Perhaps your local homeless shelter? Hey, it seems like public schools might be needing some help soon. Buying and sending books to any of these places would be much better and more useful than sending them to Trump just to try to make a scene.

I know, I know. Especially in the current climate, making a scene can be pretty alluring. After all, that’s what the president does every day, and scenes can, in fact, be useful forms of protest. But in this case, it just sort of seems like a waste of good books. 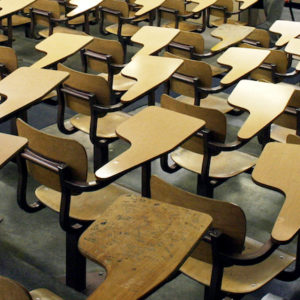 Each year, thousands of writers, teachers, editors, and others in the publishing world gather for the Association of Writers...
© LitHub
Back to top