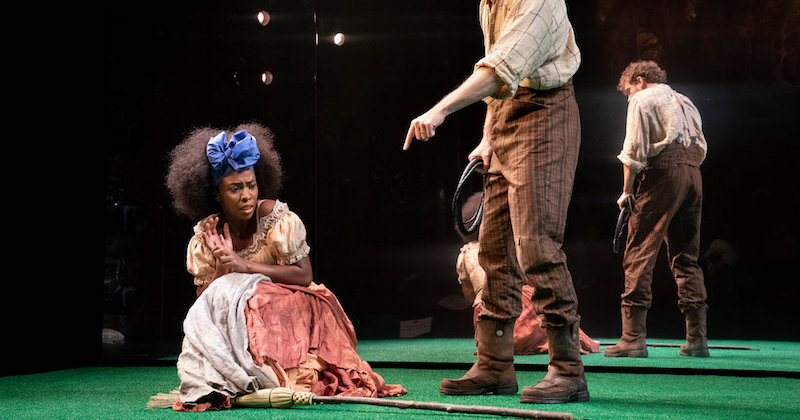 As Americans get vaccinated and pandemic restrictions are lifted, theaters are opening up and announcing new programming. Last week, LA’s Center Theatre Group announced the 2021-22 season for their two theaters, the Mark Taper Forum and the Kirk Douglas Theater, which included Jeremy O. Harris’s Broadway hit Slave Play. But yesterday, via Twitter, Harris shared the text of a letter he wrote to CTG—which said he was removing Slave Play from the season due to CTG’s lack of woman-authored programming.

In both the Mark Taper Forum and the Kirk Douglas Theater, CTG’s 2021-22 season only includes one play by a woman: a revival of Pearl Cleage’s 1995 play Blues for an Alabama Sky. “As a playwright who holds dear the principle of inclusion it was a shock to realize this season was programmed with only 1 woman across all theatres,” Harris’s letter read, in part. “As an Angeleno and a lover of theatre I think Los Angeles audiences deserve an equitable showing of the playwrights working in the US right now. I’ve spoken to my team and would like to begin the process of removing slave play from the season at this time.”

Harris wasn’t the only writer to publicly take issue with CTG’s season announcement: Sarah Schulman, who began her writing career as a playwright, took to Twitter to express her dismay. “I emerged as a playwright decades ago into a world of all-male, all-white seasons—with all-male, all-white critics who were hostile to women writers who had perspectives different from the men who ran the world,” said Schulman.

Because we were initially dismissed by an inequitable system, we have clouds hanging over our work. We have had to endure generations of watching our male peers getting opportunities we have never had . . . Today the Mark Taper Forum announced their new ten-play season in which the great Pearl Cleage is the only wom[an] included. HOW CAN THIS STILL BE? It is so depressing, stupid and enraging. When is this going to end?

Last night, CTG’s leadership—artistic director Michael Ritchie and managing director and CEO Meghan Pressman—responded via Twitter, acknowledging CTG has “fallen short of our own expectations and those of our community in regards to gender equity,” and promising to do better. They also highlighted their existing “commitment to gender equity amongst playwrights”: they said CTG recently commissioned 11 new plays by women playwrights, this year’s CTG writers workshop is entirely women playwrights, and all four directors in the newly announced season in the Kirk Douglas Theater—their smaller venue—are women or non-binary. “We respect Jeremy’s opinion and believe in him as an artist. We hope to continue our relationship with him going forward,” said Ritchie and Pressman. “We are regrouping and will be able to share more in the coming days about the impact on our upcoming season.”

Plans for Slave Play’s West Coast premiere are now up in the air, but Harris is at peace with his decision. “I’ve been in awe of CTG since I was a young writer living in LA and begging my friends with subscriptions to eschew their dates in favor of me so I could see the shows in their seasons,” said Harris on Twitter. “I also have to stand by the values my community has come to align me with and institutions that are able to evolve along with those values . . . I’m also hopeful given my conversations, if brief, with members of CTG’s board, that something might be achievable in the coming weeks that points toward real change.”