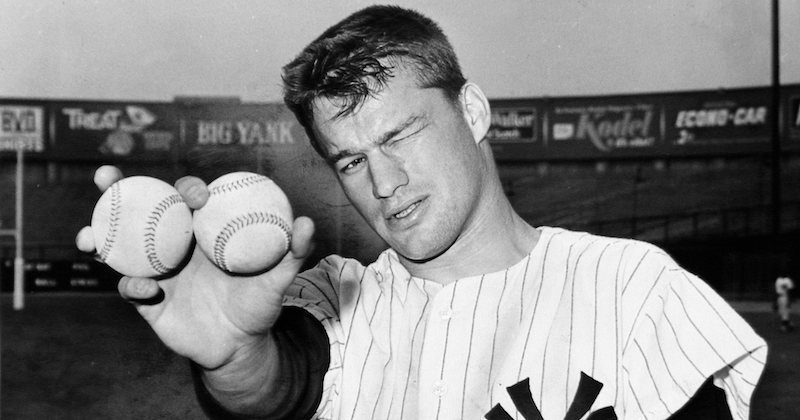 Fifty years ago this month Jim Bouton set the baseball world on fire.  His kindling was Ball Four, a book that torched everything the game’s standard bearers held sacred. There had been sports diaries before, which, structurally-speaking, was what Ball Four was, but there had never been a sports diary like this one—one that was also a de facto political statement. “You were either for it or against it,” Bouton’s roommate with the 1969 Houston Astros Norm Miller told me. There was no middle ground.

In an era of social change, when seemingly everybody was questioning everything, Ball Four brought at last the ethos of the times into the staid world of baseball. “I knew he was writing a book from day one because he told me,” Miller continued, “but there had never been anything like that. That’s like saying, ‘Hey, roomie, I’m going to wear a new suit tomorrow,’ and he shows up in a Nehru. I’d say, ‘Holy shit. That’s not a new suit. That’s a new everything.’”

What made Ball Four a Nehru? Prodded by his editor, former New York Post columnist Len Shecter, Bouton dug deeper into the psyche of baseball than anyone had previously attempted. He analyzed everything—his thoughts, assumptions, values, as well as those of his teammates and management. Bouton and Shecter realized they were catching the game at a crossroads and were alert to the confluence.

Baseball and the 1960s were colliding, they noticed. Things were changing. The players, who were by nature conservative, were at last growing their hair out—just a little—and starting to push back against the paternalistic rules dictated by management. Keep an eye on that, Shecter suggested. Bouton did. And then some.

Bouton’s eye didn’t miss much. While his teammates laughed and talked and traded tales of personal and baseball woe, Bouton took it all down, writing this or that on whatever he had available so that he’d remember it that night when he would record the day’s events into his tape recorder. In all he accumulated 978 separate sheets of notes—on hotel stationery, envelopes, toilet paper, whatever he could find.

The 978 sheets became the bones of what would become Ball Four. They were crammed with anything and everything Bouton saw, heard, thought, or felt. Some of them contained writing tips to himself: “When writing a critical piece, start gradually with the weakest stuff and build a case—then come with the big stuff at the end.” Some contained his predictions as to who would make the club once the season started or his pitching strategies when facing a particular team; some contained his musings on the mercurial slugger Dick Allen, who at the time was engaged in an undeclared, unprecedented midseason sit-down strike against the Phillies: “This might just be a man trying to be one around people who expect something less and used to something less.”

“I want it to be the book that’s recommended 25 years from now when someone asks, ‘What was baseball like way back then?’”

Still others were attempts to figure himself out along with his place on the club: “I don’t want to be just average or appear to be so. I want to be hip and be considered intelligent and aware—creative, funny, fun to be around.” But most of them were his attempts to catch baseball lightning in a bottle—the banter between teammates, the odd logic of old-school baseball wisdom, the wise-ass remarks, the unintentional humor, the deep cruelties. His goal was to capture as much of this as he could, and he used nearly every inch of available scrap paper to do so.

By midseason he knew he had something that was going to rock the baseball world. “I know some people are not going to like what I have to say,” he confided to a friend during the season. Some of those people might even be members of his family—one of his notes contains a quote from one of his brothers, who knew what was coming: “This is a great book Jim but what’s mom gonna think?”

Unbowed, he soldiered on, his incessant note-taking making him even more of an outsider than he already was. “Back then,” said Norm Miller, “if you were writing a book on anything—gardening—you would have been under suspicion. Because you were supposed to be a ballplayer. ‘We don’t need any authors’” was the mantra, Miller said.

Bouton and Shecter had an eye for what would make their book stand apart from the factory of sports diaries—presumed tell-alls—that were already the rage at the time. They were not only aware of how far those books had gone in their revelations but of where they stopped. They were determined to lift the veil that stubbornly remained over professional sports, despite the “insider” status of those books, which appeared to Bouton and Shecter to be compacts between the athletes whose names appeared on the covers and the sportswriters who were actually doing the writing to keep the public at arm’s length from the real lives of the American professional athlete. The only compact Bouton and Shecter had was to tell the whole, unexcised truth.

By March 1970 talk of the book had already begun to swirl, even though it was not scheduled to be released for months. Sportswriter George Vecsey wrote that “it could very well be the most provocative ever written by an athlete,” after hearing snippets of what was promised to be contained therein. He knew there would be trouble, though, because he knew both Bouton and Shecter.

Bouton had better get off to a solid start, Vecsey wrote, because the Astros were perhaps the most Puritan organization in all of baseball. They forbade players from talking to women in their hotel lobby and went so far as to not only require all single players to live in the club’s barracks during spring training—far from the nightlife of Florida’s Cocoa Beach—but also lock the barrack doors at night so as to prevent any of them from sneaking out. While no club would likely take kindly to a true “insider” book, the Astros seemed primed to react more harshly than most.

Bouton’s goal was to paint a portrait of baseball as it existed circa 1969. He wanted, he said shortly after the book’s release, to create a record that could be referred to for generations. “I want it to be the book that’s recommended 25 years from now when someone asks, ‘What was baseball like way back then?’” So he took care to paint the clubs he documented—the 1969 Seattle Pilots and Houston Astros—in Technicolor, like the mythical world of Oz.

“It could very well be the most provocative ever written by an athlete.”

“Dorothy has the family members,” he later said, “and they’re interesting, but she needs to get away, and when she finds this other world, she comes back and has a whole new appreciation of where she was in the beginning because she’s come to see them in Technicolor.” After reading Ball Four, baseball fans experienced a similar sensation.

Ball Four was a personal work that invited the public in. At times both profane and confessional, Bouton’s work lays bare his vulnerabilities as well as his love for a game that nevertheless frustrated him on a regular basis. Both his cynicism and charming innocence are sometimes displayed all at once, recalling a Holden Caulfield–like character who is both attracted to and repelled by the adult world simultaneously. Even his prose at times recalled Salinger’s Caulfield:

The meeting before the game was marvelous. When we went over the hitters, Gary Bell had the same comment on each one: “Smoke him inside” (fastball inside). Frank Howard, McMullen, Brinkman, Epstein—every hitter. “Smoke him inside,” said Bell. It got to be funny as hell after a while, because not only did he get no opposition, but he was taken seriously. According to the gospel of Gary Bell you pitch to the entire Washington team by smoking them inside.

In the clubhouse [manager] Joe [Schultz] delivered his usual speech: “Attaway to stomp ’em. Stomp the piss out of ’em. Stomp ’em when they’re down. Kick ’em and stomp ’em.” And “Attaway to go boys. Pound that ol’ Budweiser into you and go get them tomorrow.” This stuff really lays us in the aisles.

Because of all this Ball Four managed to sear itself into the souls of the millions who read it, unlike any of its predecessors. Previous sports diaries such as Jim Brosnan’s The Long Season (1960) and Jerry Kramer’s Instant Replay (1968) were fine books and are still good reads, but they didn’t enter the consciousness of the nation like Ball Four did.

“If the literary detective Don Foster is right,” David Kipen wrote upon the release of the final update of Ball Four in 2001, “and the books we read early imprint themselves on our writing styles for life, here’s betting that there are a lot of middle-aged writers out there with at least a fragment of Bouton’s DNA in their prose.”

Perhaps, but as Vecsey predicted, the Astros weren’t impressed. Less than two months from the date of Ball Four’s June 1970 release they optioned Bouton to Oklahoma City. 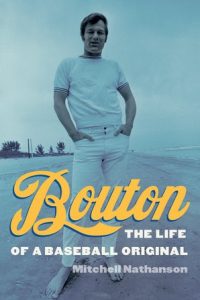 Mitchell Nathanson’s book Bouton: The Life of a Baseball Original is available now.

Mitchell Nathanson is a professor of law in the Jeffrey S. Moorad Center for the Study of Sports Law at the Villanova University School of Law. He is the author of God Almighty Hisself: The Life and Legacy of Dick Allen, A People’s History of Baseball, The Fall of the 1977 Phillies: How a Baseball Team’s Collapse Sank a City’s Spirit, and Bouton: The Life of a Baseball Original. 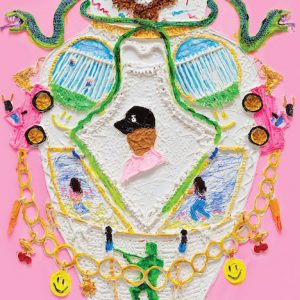 In March 2004, I was invited to Santiago, Chile to celebrate Pablo Neruda’s centennial. If you’ve been to Chile, you know...
© LitHub
Back to top
Loading Comments...