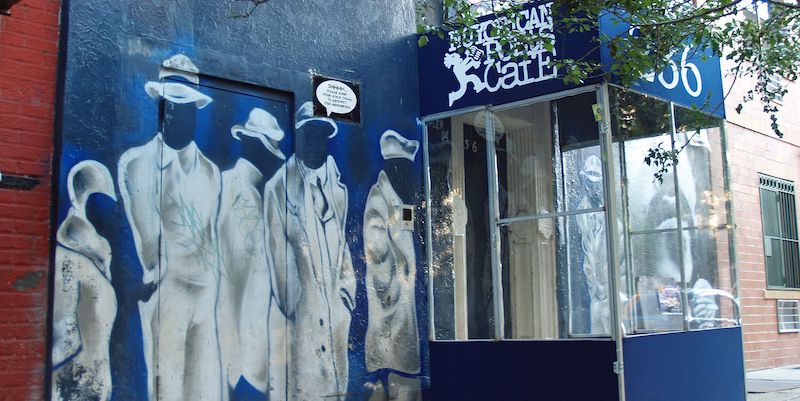 In 1973 Miguel Algarín, a former professor of Shakespeare at Rutgers University, brought together a group of people, including Nuyorican poetry icon Pedro Pietri and poet and playwright Miguel “Mikey” Piñero, for a performance series in his living room. Lacking a venue and an audience, these young poets excitedly recited poetry to and for one another. Once an Irish pub called the Sunshine Cafe became available across the street at 505 East 6th Street circa October 1974, Algarín rented it and the first “public” Nuyorican Poets Cafe was born. The open- door policies of the poetic gatherings first held by Algarín in his apartment were also implemented in this new public and commercial space.

As former director of the Cafe, Lois Elaine Griffith remembered the Open Room as “a stage where anybody could get up and share their art without prejudice. You didn’t have to be a famous person; all you had to do was sign the book at the edge of the bar, wait your turn, and say what you had to say.” This lack of pretense enabled the Nuyorican Poets Cafe to function as a space for diverse performance mediums, races, ethnicities, and sexualities. Gaining entry and participating, then as now, requires no literary or social pedigree.

The ethnic signifier “Nuyorican” in the Cafe’s name did not preclude non-Nuyoricans from reading, performing, or taking on leadership roles within this space and this movement for urban cultural expression and communal uplift. As an example, the Cafe was originally run by Algarín and his live-in boyfriend, Richie August, while Griffith worked the bar. August and Griffith are non-Latina/o/xs who both perform and work at the Cafe and who, alongside literary luminary Ntozake Shange, are listed on the Cafe’s website as Nuyorican founding poets. So, while “Nuyorican” signals a definitive ethnic-cultural background—Puerto Ricans in New York—the Nuyorican Poets Cafe always remains inclusive of those New York writers making politicized poems and performances regardless of their race, ethnicity, gender, or sexuality. In our 2006 discussion of those early days, Griffith told me that although the Cafe has “its Puerto Rican roots,” it remains open to everyone, bringing in people from all over the Lower East Side to attend and participate in the events.

Footage and materials documenting this history of openness foretell the performances that continue in the Cafe currently, from music to theater and poetry slam. Although audiovisual records are scarce, Marlis Momber’s 1978 documentary Viva Loisaida, focusing on the Lower East Side, is useful as a historical record from the founding years of the Cafe and encompassing neighborhood. However, Momber wa s not the only person documenting performances at the Cafe during the early 1970s, as I discovered in 2018 as a Visiting Fellow at the Hemispheric Institute of Performance and Politics (the Hemi) at New York University.

The continued precarity of queer lives and histories at the Nuyorican compounds the exigency of this archival work with the continuing changes to the neighborhood.

During my time at the Hemi I reconnected with Griffith, who has recently established the Nuyorican Poets Cafe’s Founder’s Archive Project (NPCFAP). I’ve known Griffith for almost twenty years, first meeting her when I began hosting the Friday Night Poetry Slam in 2003. Due to my connection with the Cafe and based on our previous collaborations, Griffith invited me to join her efforts to trace, gather, and catalog the history of the Cafe via a digital and physical archive. Reaching out to artists, performers, and community members who contributed to and participated in the Cafe since its inception, Griffith looks to ensure that this important work will be preserved and accessible to all.

As a member of the NPCFAP I connected Griffith to the collections specialist and project manager for the Hemispheric Institute’s Digital Video Library (HIDVL), Jehan L. Roberson, in order to begin acquiring video recordings from the 1970s onward to historically preserve a collection to be housed within the Hemi’s digital library. From audio of 1970s-era street interviews conducted by Griffith and Pedro Pietri in the Lower East Side to a recent interview with Miguel Algarín conducted by Roberson, Griffith, and me, to raw footage of poetry slams in the 1990s, this collection will share Nuyorican past and present with a global audience. This archive operates from protocols established by the Open Room and within the genealogy of the nuyorican aesthetic.

Also included in the collection are open-reel magnetic tapes filmed by Stuart Reid, who was active at the Cafe in the 1970s, with black-and-white performance footage from 1974 that has never been seen before. In fact, the first few scenes on Reid’s reel are of a young Louey Guzmán, now known as Luis Guzmán, a character actor and star of the stage and screen. Through his poetic performance Guzmán calls for revolutionary change and dedicates his poem to Changó, a Yoruba deity, falling in line with the cultural pride and affirmation through poetry most often associated with the Cafe during that time.

The camera pans out during Guzmán’s performance as Reid captures the faces of audience members, many of whom are standing as they listen intently. One of the people in the audience is a young Black man with glasses and facial hair who is standing off to the side and playing an upright bass. Alongside him is a trio of drummers—Stephanie Chapman, Eddie Conde, and Richie Cruz—playing the congas, and who provided the musical soundtrack for many Cafe performances in the 1970s. Chapman, documented in action , comes into focus because of how she disrupts the patrilineage of conga playing and the heterosexism often used to define Nuyorican poetry and performance aesthetics. A member of ABC Loisaida, or A Band Called Loisaida, Chapman is a young lesbian active in the Loisaida art scene.

Through slam poems, poets can relay the Cafe’s original ethos of openness through the articulation of marginalized identities in verse.

The dearth of information on Chapman, her artistic practices, and her subsequent influence on the Cafe and Loisaida in general speaks to the scant attention paid to women and queer poets/performers in the Cafe’s history. That Chapman, as a Nuyorican lesbian active in the Cafe, is never mentioned in previous texts documenting and analyzing the space remains a significant omission, as Chapman signals a rarely discussed early queer presence. This project took on a necessary urgency as the number of people involved in the Nuyorican movement who were present and active at the Cafe since the beginning decreases due to illness and death. From Chapman to Loperena, and many others lost to the AIDS crisis, the continued precarity of queer lives and histories at the Nuyorican compounds the exigency of this archival work with the continuing changes to the neighborhood.

On December 6, 2019, two days after hosting an event centered on the negative and dangerous effects of gentrification in the Lower East Side, the Cafe was notified that it must close due to a conflict “between the Department of Buildings and the luxury condo development under construction next door.” Response to the Cafe’s temporary closing wa s, swift as borough president Gale Brewer, city councilwoman Carlina Rivera, and staff members of the Department of Buildings took quick action to enable the Cafe to remain open for small-scale events as the issues are resolved. The significance of this closing cannot be underestimated. Limiting attendance at Cafe events to 74 people or less resulted in the cancellation of the Friday Night Poetry Slam and other larger weekly events until the alley destroyed by the real estate developers is replaced.

It seems ironic that the event that commercialized the Cafe, the Friday Night Poetry Slam, is the one most affected by the construction happening in the neighborhood. Yet, poetry slam as a performance genre at the Cafe has the potential to serve as performed historiography. Through slam poems, poets can relay the Cafe’s original ethos of openness through the articulation of marginalized identities in verse as the fight against gentrification and hyper-capitalism in Loisaida continues. 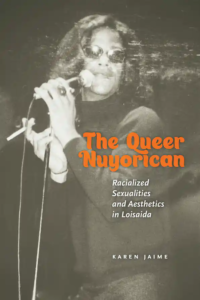 Excerpt adapted from The Queer Nuyorican: Racialized Sexualities and Aesthetics in Loisaida by Karen Jaime. Used with the permission of NYU Press. (edited)

Karen Jaime is Assistant Professor of Performing and Media Arts and Latina/o Studies at Cornell University and the author of The Queer Nuyorican: Racialized Sexualities and Aesthetics in Loisaida (NYU Press, 2021). As a published poet, Karen’s work is included in The Best of Panic! En Vivo From the East Village and Flicker and Spark: A Queer Anthology of Spoken Word and Poetry. 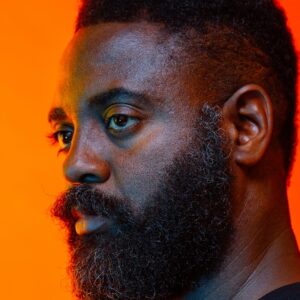 Reginald Dwayne Betts is the guest. His new poetry collection, Felon, is out now from W.W. Norton & Company. From...
© LitHub
Back to top
Loading Comments...