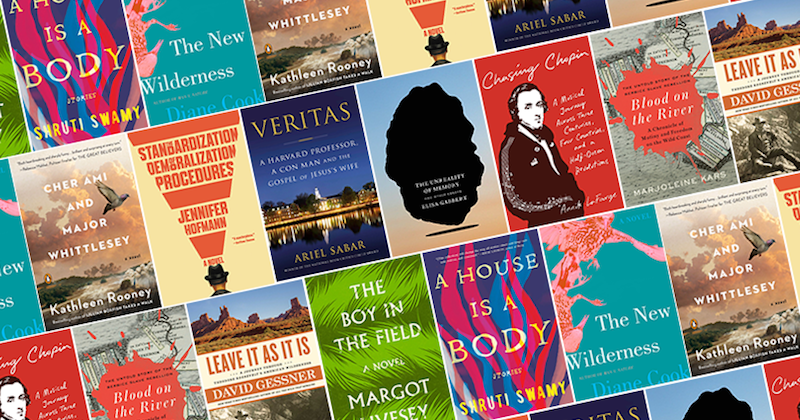 Margot Livesey’s The Boy in the Field, Diane Cook’s The New Wilderness, Kathleen Rooney’s Cher Ami and Major Whittlesey, and Elisa Gabbert’s The Unreality of Memory all feature among the Best Reviewed Books of the Week.

1. The Boy in the Field by Margot Livesey

“… luminous … Livesey’s language is crystalline-clear and immersive, replete with vibrant imagery and echoes that play particularly effectively in her portrayal of Duncan, whose vivid imagination stymies him during class … Ultimately what keeps Livesey’s novel aloft is that it is full of kindnesses … Like so many other moments in this novel, that description nails the moment, the character, and the elemental aspect of the book in one fell, satisfactory swoop.”

2. A House is a Body by Shruti Swamy

“Powered by intense imagery and jolts of frank sexuality, Shruti Swamy’s A House Is a Body blurs the line between fantastical and naturalistic storytelling with its tales of love, loss, and life lived across cultures … The stories easily shift between continents and cultures … Throughout, Swamy’s sensuous style illuminates her characters’ thoughts and actions, easily accommodating a wide range of moods, from understated tragedy to more surreal flights of fancy. Just like the loyal housedog and cobra who duel in the concluding, fable-like Night Garden, Swamy dances on the boundaries between life and death, and between ennui and irrevocable change, with mesmerizing results.“

Read an excerpt from A House is a Body here

=3. The New Wilderness by Diane Cook

“… inspired … In Cook’s masterful hands, there are no easy answers to the question of whether humans can actually revert to their wild selves … seems to argue that it is this willingness to ditch guidelines in the name of personal advantage that is the essence of humanity, whether one lives in the City or the Wilderness State…That’s all secondary to the true, transcendent heart of this novel: the evolving and ever-surprising relationship between Bea and Agnes. Through miscarriages, abandonments, rescue and murder, the bond between mother and daughter breaks and mends in remarkable and moving ways … A gripping adventure that denies its readers easy answers, The New Wilderness is an important debut, and an illuminating read in these times, when the stakes of humans’ relationship with nature have never felt higher.”

“Rooney is a multitalented, nimble writer, moving easily among literary genres and styles … It’s quite a leap, and a beautifully successful one, from modern New York City to the trenches of the Argonne Forest near the end of World War I and the alternating voices of a soldier and a bird … Rooney’s plot delves imaginatively into a historical incident; all the characters, real names preserved, including the bird’s, are based on actual soldiers. Rooney creates warm and empathetic portraits of them … The novelist, with admirable restraint of her anger at a war born of greed and arrogance by politicians and generals, unfolds with patient attention to the characters and their impossible mission, what real courage is … The use of a pigeon narrator in a dead-serious story could have come off as a gimmick. But Rooney uses him well. From the vantage point of his flights he sees, more clearly than the major, what a mess humans routinely make, when they interfere with the natural world and each other.”

5. The Standardization of Demoralization Procedures by Jennifer Hofmann

“…[a] gripping debut novel … [serves] as a reminder that even the negation of history—misguided and doomed to fail—arises from human frailty, our inability to reckon with ourselves … Hofmann portrays this pervasive sense of syncope through rhythmic prose and powerful allusions to faith in an amoral world … Throughout the book Zeiger is told that ‘the why’ does not matter. That is probably true. And yet, Tolstoy’s oft-repeated lines, ‘All happy families resemble one another; every unhappy family is unhappy in its own way,’ perhaps could also apply to authoritarian governments. While they share common aspects, they are, each of them, particular to their time and to the culture and history from which they arise. What Hofmann’s novel could have explored further is this: What made this one possible?”

Read an excerpt from The Standardization of Demoralization Procedures here

1. Veritas: A Harvard Professor, a Con Man and the Gospel of Jesus’s Wife by Ariel Sabar

“… extraordinary … You could not find a better demonstration of the central truth about forgeries: that historical verisimilitude does not lie in reflecting the sensibility of the past but rather in fulfilling the persuasions and aspirations of the present … It would be unfair to tell you, for, in truth, the book is as good as a detective novel, possessing plot, subplots, hidden motives, bees in eccentric bonnets and startling revelations”

2. The Unreality of Memory: And Other Essays by Elisa Gabbert

“The novelist Walker Percy once asked, ‘Why do people driving around on beautiful Sunday afternoons like to see bloody automobile wrecks?’ With this simple question, Percy reveals the depth of human malaise. We seek the bloody in the beautiful and savor the gratifying and self-satisfied thrill of knowing we ourselves have momentarily escaped the suffering of the accident. In her absolutely stunning collection of essays, The Unreality of Memory, which is part medical and psychological sleuthing and part memoir, Elisa Gabbert takes up Percy’s question and places it in our current cultural context … Gabbert doesn’t only probe into our fascination with the pull of death and disaster. She also peers behind the curtains of mortality and time to explore the ways that memory and story either lull us into complacency about moral evil or allow us to embrace impending death … Gabbert candidly asks startling and unsettling questions about our view of human nature and the ways we are often complicit in the suffering of others. With the world teetering on the brink of the political, social, environmental and medical abyss, The Unreality of Memory is a book for our times.”

“LaFarge delves passionately into the history and culture—up to the present day—surrounding Chopin’s legendary Opus 35 sonata … a singular work combining historical research and personal and musical passion … LaFarge is at her best writing about the techniques of piano playing, and while certain passages will be challenging for nonmusicians, the author points to an accompanying website, whychopin.com, which offers a host of relevant musical selections for each chapter of the book … In addition to her engaging history, LaFarge energetically pursues Chopin’s continued influence on musicians today … A seamless blend of the musical and literary verve, with just enough research to ground and elucidate.”

4. Blood on the River: A Chronicle of Mutiny and Freedom on the Wild Coast by Marjoleine Kars

“… comes alive with period illustrations, as well as meticulous attention to primary sources. Kars recounts a tale of oppression, bloodshed, and some triumph; rebelling slaves held off their masters for nearly a year … a gripping tale about the human need for freedom. It is also a story of shifting loyalties among slaves from differing backgrounds, between slaves and Amerindians, and among the Europeans themselves … While Kars did not set out to write cultural history, readers may have trouble retaining the minutiae she so carefully presents. However, because her scrupulous research provides spellbinding detail, perhaps that is beside the point … The story of the Berbice Rebellion begs to be told, and Kars’ telling is impressive.”

5. Leave It as It Is: A Journey Through Theodore Roosevelt’s American Wilderness by David Gessner

“Gessner embarks on a leisurely but consistently interesting journey that follows, more or less, T.R.’s loop around the West. Along the way, we get engaging local color (a gathering of Roosevelt impersonators in North Dakota) and a solid sense of the man: energetic, inquisitive, immune to self-doubt and an ardent lover of nature. Gessner celebrates Roosevelt’s conservation achievements: five national parks, 18 national monuments and the U.S. Forest Service … Gessner wrestles with these issues thoughtfully, weighing Roosevelt’s accomplishments against the cold and ugly.”