On Wednesday night, in a ceremony at the New-York Historical Society, and with a keynote by Toni Morrison, the Whiting Foundation announced the winners of its annual grant—given to support the work of emerging writers of fiction, nonfiction, poetry, and drama. The Whiting Awards are given based on early achievement as well as the “the promise of superior literary work to come,” and come with a cash gift of $50,000, which makes the Whiting one of the richest literary prizes, especially for early-career writers. “Year on year, we’re astounded by the fresh ways Whiting winners challenge form and stretch the capabilities of language, while scrutinizing what’s most urgent in the culture,” said Courtney Hodell, Director of Writers’ Programs, in a press release. “The award is intended to give them the freedom to keep experimenting and growing.”

The ten winners are:

Anne Boyer (Poetry and Nonfiction), author of Garments Against Women, whose work “unsettles all the familiar shapes of memoir and poetry to build a new city, one where worn ideas of labor and creativity are a monument toppled in the square.” Read an interview with Boyer at the Poetry Foundation.

Tommy Pico (Poetry), who “writes poetry of rare brilliance, assured in form and forceful in its interrogation of myth and cultural expectations and self.” Read an interview with Pico (and/or his take on Thanksgiving) at Literary Hub.

Nathan Alan Davis (Drama), whose work shows an “uncanny gift for allegory and language, boiling down the large narratives of the African-American past to the scale of individuals wrestling to express themselves.” Read a review of his play Nat Turner in Jerusalem at the Washington Post.

Brontez Purnell (Fiction), author of Since I Laid My Burden Down, whose “explorations of blackness, queerness, maleness, and Southernness take sharp, confident turns between raunch and rhapsody.” Read an interview with Purnell at Art in America, and/or Michelle Tea on why Purnell is everything at Granta.

Hansol Jung (Drama), whose plays “knit together the agonies of Korean history, the restless excitement and anxiety of the tech age, and the shapes of loss and longing.” Read a feature about Jung at American Theatre.

Esmé Weijun Wang (Nonfiction), author of the forthcoming The Collected Schizophrenias (Graywolf Press, 2019), which “undertakes an investigation into life with schizoaffective disorder and chronic illness with narrative drive and prose of confiding grace.” Read Wang on why her novel, The Border of Paradise, uses untranslated Chinese at Literary Hub.

Rickey Laurentiis (Poetry), author of Boy with Thorn, whose poems “trace the complex relationships among power, freedom, and violence with both sinuous lyricism and urgent declamation.” Read an interview with Laurentiis at Blackbird and then read his poem “Beautiful Bottom, Beautiful Shame” at Literary Hub.

Weike Wang (Fiction), who, in her novel Chemistry, “takes apart what we know about the immigrant experience and puts something bold and new in its place, with a scientist’s eye and epigrammatic humor.” Read an interview with Wang at AAWW.

A Reading Series Hosted in an Abandoned Industrial Silo 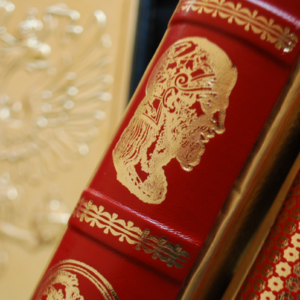 When you have a little extra cash burning a hole in your pocket, it's always a good idea to spend it on a book. When you have...
© LitHub
Back to top