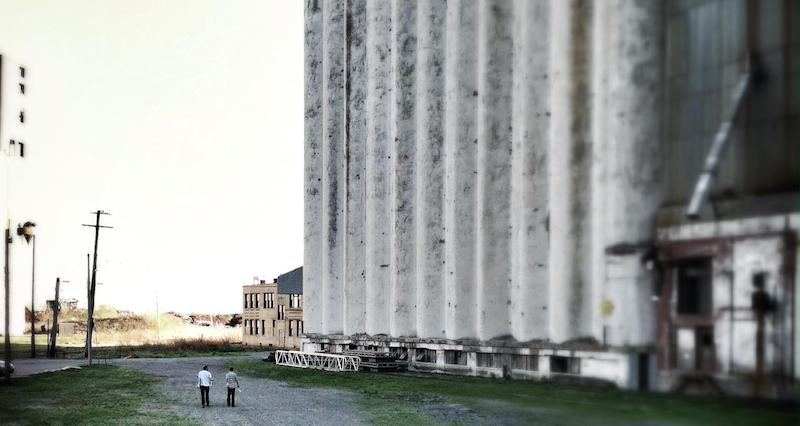 A Reading Series Hosted in an Abandoned Industrial Silo

Buffalo is known as a blue collar, working class sort of town, but it is also a city full of artists, writers, and musicians. When I moved there in 2012 for my job as education director of the nonprofit Just Buffalo Literary Center, I joined a well-established arts community.

Through my work at Just Buffalo, I connected with many local poets, writers, and artists, hiring some to teach creative writing in area schools or lead workshops for teenagers at our writing center, which is a free after-school space.

One of the first writers I met was Joe Hall, who at the time had just started his PhD in the University at Buffalo Poetics Program. Over drinks one night, as we discussed poetry and our favorite Buffalo haunts, Joe mentioned that he had a book, The Devotional Poems, coming out in the spring of 2013. When he asked if I knew of any venues that could host his launch event, what came to mind was Silo City, a cluster of historic, decommissioned grain silos that tower over a portion of the Buffalo River.

My wife and I had been exploring the city on bicycle. Every night after work we’d ride to a new bar, restaurant, or gallery—it was the ideal way to learn the makeup of our new hometown. One night we made our way down to the old grain silos for an art event and were fortunate to cross paths with the silos’ owner, Rick Smith, a mustachioed businessman who resembles a character out of the Wild West. Alongside Rick was the caretaker of the silos, “Swannie” Jim Watkins, a rougher version of what I imagine Walt Whitman would have looked like had he spent his life working on the railroads. Rick and Swannie were very welcoming and excited to learn of our recent move to the area. Rick had already been a longtime supporter of the local arts community, particularly of Just Buffalo Literary Center’s BABEL Series, which hosts high-profile authors.

I emailed Rick to ask if we could have a poetry reading in one of the silos, and he responded with an enthusiastic yes. He agreed to lend us the silos for an evening, which allowed us to do something special for Joe’s book release and attract more people to an industrial and historic nook of the city.

For Joe’s event it wasn’t difficult to find talented people of various disciplines. Rick connected us with a local photographer, Thomas Bittner, who exhibited his work. Joe and I invited local klezmer band, Ahavaraba, who filled the vacant cement megalith with their Eastern European-inspired folk jams. We had music, we had art, we had poems: we had the first Silo City reading.

About 30 people attended that first reading, and it had a great DIY feel, with a party-like atmosphere. I liked the idea of bringing together a variety of art forms and creating opportunities for people to find and feel connections between different forms of expression. The Silo City series grew out of our desire to celebrate the arts community with the silos as the stage. I wanted to create an intersection between disciplines, an event that would include as many artists as possible. The idea was for everyone involved to feel that they were contributing to something unique—and they were.

We host free readings in June, July, and August—performances can only take place in the summer as the silos are not winterized. Our events draw 80 to 120 people, some crossing the border from Toronto to take in the enormity of the silos enveloped in art. Featured art forms have included live sculpture, live chalk art, virtual reality, experimental dance, large-scale installations, and film. Each reading starts out with a local poet, followed by local musicians, and, on occasion, a touring band performs. Notable visiting poets like Ocean Vuong, Morgan Parker, Mathias Svalina, and Natalie Shapero take the stage to close out the evening.

There really is something magical about the site on which these silos stand. Perhaps, it is the evidence of an abandoned industry or the proximity to waterways now filled not by grain and grit, but wildflowers and creative expression. The turn-off from the main road onto the drive leading to the silos is just long enough to make you wonder if you’ve made a wrong turn, but then as you cross the grassy railroad track and notice the Buffalo River snaking along in the distance, with the silos rising up around you, you realize you’re in the right place. In the belly of these giant, decaying concrete structures, words become music reverberating off the walls and into your ears.

So many moments are worth noting. Ocean Vuong compared the silos to the ancient Roman forum, and by the way he said it, you could tell he actually meant it. Zachary Schomburg read his poem “The Fire Cycle” as Austin-based, singer-songwriter Small Houses offhandedly strummed along in an echoing accompaniment. And last June, when artist and filmmaker Mary Helena Clark screened her film Delphi Falls as the sun dropped behind the silos and the shadows began to retreat, I felt goose bumps pimpling up on my arms and on the back of my neck. Very likely this was because of the stunning imagery and sound in the film, but I think it was also the realization that I was sitting in the silos with over 100 art-loving Buffalonians and that this was summer in Buffalo.

Thanks to the ongoing support of Just Buffalo Literary Center, Rick Smith, and Swannie Jim, we are now going into our sixth season. Many others have helped make the series possible, including poet and Peach Mag editor Rachelle Toarmino, Just Buffalo Writing Center Coordinator Robin Jordan, and Kevin Cain, producer of the Silo Sessions, a concert series filmed and recorded within the silos.

I never imagined that taking a personal interest in a friend and fellow poet would lead to an ongoing series. In curating events, I draw on my community, friends, and the poets and artists who deserve this platform: they all make our city by the lake so damn beautiful. For our upcoming season, I look forward to hosting poets Rachel McKibbens, Marina Blitshteyn, Hanif Abdurraqib, Tom Dreitlein, Kazim Ali, and Marcus Jackson.

Noah Falck is the author of Snowmen Losing Weight, You Are In Nearly Every Future, and Exclusions. His work appears in Boston Review, Brooklyn Rail, Conduit, Ploughshares, and Poets.org. In addition to curating the Silo City Reading Series, he works as education director at the not-for-profit Just Buffalo Literary Center.

Teju Cole: "We are Made of All the Things We Have Consumed" 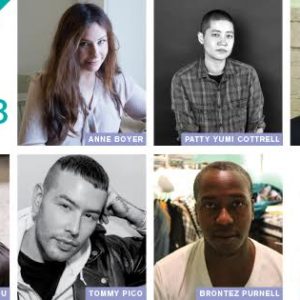 On Wednesday night, in a ceremony at the New-York Historical Society, and with a keynote by Toni Morrison, the Whiting Foundation...
© LitHub
Back to top