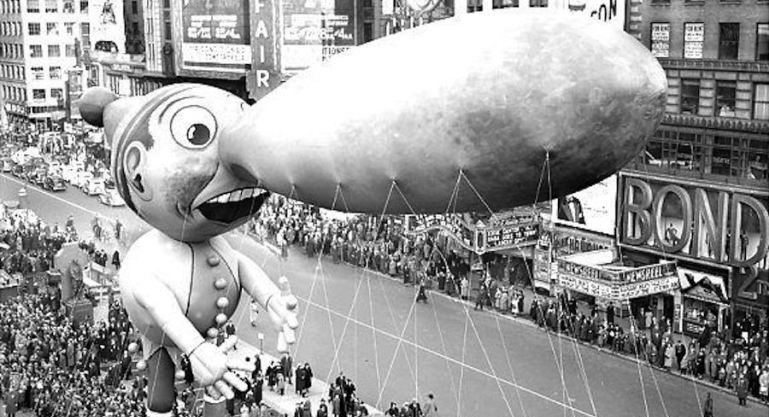 What we’re not saying is: this holiday has perhaps made you uncomfortably aware of the continuing colonial legacy of the United States—you have maybe read about this. Maybe you also felt it on Columbus Day. Maybe you Tweeted a link to something once or updated your Facebook status. Maybe you were at a Halloween party with a dude in a headband and a feather who kept falling down and bellowed “I’M A DRUNK INDIAN” or with a girl in a headdress who had a sign around her neck that read “I survived the Trail of Tears and all I got was an alcohol problem.” I’ve been there. Those parties suck.

And in that sense, I don’t mind the question: Do I celebrate Thanksgiving? Well, I wake up every day knowing that I live on occupied land. You see 14th

Street and I see a massacre, and sometimes that’s all I can see. You’re maybe only a little bit aware of it for a small part of today, in between the family or the baking or the turkey. It might be a twinge. But that twinge is where I live.

The other thing we don’t say is that you’re not really asking if I, Tommy Pico—poet-thing, lover of interspecies friendships, mascot brawls, and YouTube bloopers—do I celebrate Thanksgiving. You’re asking, do Indians celebrate Thanksgiving. How should I know? I might be the only NDN you’ve ever encountered. I might be the only NDN you’ll ever encounter (that makes me sad). But still, I’m not your race rep. And in that sense, the question makes me kind of hate you. Ok, no, not really, we’re cool. I know you. I like you. I’m sure you did or do something I admire. We might be friends! I might have a crush on you. I might totally love you.

Back to the question: Do I celebrate a day that amplifies historical propaganda, that celebrates genocide and a manufactured moment of harmony between an occupying force and its subjugated resistance? That elides generations of torture, rape, and cultural erasure?

You’re goddamn right I do.

But maybe not in the way you suspect. However amplified your sense of colonizer’s guilt is today, for me it’s deafening. In my grandmother’s generation, our traditions, language, religion, and culture became extinct. I have to do something today both productive and intensely fun with people I love, otherwise the feedback would be too much. I have to create new traditions. And! Since you were so curious as to how I celebrate Thanksgiving, here’s the day:

In Which Tommy, Chantal, Max and Kayla Have a Writing Date, Make Pie, Binge Watch Master of None, and Drink Dirty Martinis

7am: Wake up. I’m feeding my roommate/BFF Jess’s beauty of a kitty while she’s out of town, and 7am is about when Sid headbutts me awake. If Sid wasn’t so cute I would be furious—she kneads me, knocks me, and wails me awake, takes two bites of food, and then returns to bed for cuddles. Anger and adoration hold hands.

7:30am: Watch two episodes of The Man in the High Castle. I’m compelled by the mystery, feel low-key assaulted by its Nazi subway ad campaign, and am aware that in its world a weirdo NDN faggot like me would either be ashes falling lightly on Luke Kleintank’s wavy bangs, or living anxiously in the lawless Rockies.

11:30am: Running at the gym. This may be the only thing I will definitely be doing at this exact time. I run about 30 miles a week. It’s kind of about being fit or whatever but sometimes I feel like my survival might literally depend on how fast I can get away. I like feeling assured that, unless you have a gun, I can run faster than you. Also this really hot guy at the gym has started saying what’s up to me and this is around the time he’s there and last time we were in the sauna together he asked me what I do. I have seen his penis and I call it “Hosey.”

2pm: Meet at Kayla’s place. We will each read a poem or a short excerpt from a prose work and then write for four hours. I’m writing a new ‘zine called “Junk”—it’s a little bit in conversation with the A.R. Ammons book Garbage. He wrote it as an old man in the early 1990s and it’s about (I think) how people in America treat their elders. Like garbage. Like they’ve outlived their use. In my 30s I feel kind of like junk—not exactly factory fresh, not yet waived into obsolescence. But like I’m waiting for a new use.

6pm: Chantal puts her pie in the oven, Max puts the bagel bites in the microwave, I hand Kayla the Titos and the Vermouth—she shakes them into magic and I queue up Master of None. I assume we have epiphanies about Aziz Ansari’s marginalization and how it reflects our own; we will wax poetic, smoke way too many things, and I will probably tell everyone how much I love them, over and over. I will try not to get too drunk because I have a tattoo/karaoke/happy hour date with Angel the next day, and I have to email Morgan about the next Poets With Attitude, and follow up with Branded Saloon about my zine release/birthday party in three Wednesdays. I don’t ask myself what I’m thankful for. I have to make it every day.

Tommy "Teebs" Pico is author of the books IRL (Birds LLC, 2016), Nature Poem (Tin House Books, 2017), and Junk (Tin House Books, 2018). He was a Queer/Art/Mentors inaugural Fellow, Lambda Literary Fellow in poetry, and NYSCA/NYFA Fellow in Poetry from the New York Foundation for the Arts, and he's the winner of a Whiting Award and the Brooklyn Public Library's Literature Prize. Originally from the Viejas Indian reservation of the Kumeyaay nation, he now lives in Brooklyn where he co-curates the reading series Poets With Attitude (PWA) with Morgan Parker, co-hosts the podcast Food 4 Thot, and is a contributing editor at Literary Hub. 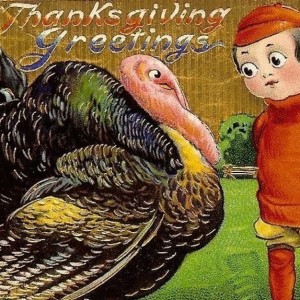 Every October 12th, in the small town in Northern California where I grew up, we sang a song about Christopher Columbus that...
© LitHub
Back to top