From Individual Action to Global Awareness: How to Save the Planet

All is Not Lost

One ball lobbed back and forth in climate change discussions is not just who’s to blame, but who should change their behaviors. Does it matter if one person recycles, when the vast majority of global greenhouse gas emissions comes from just a few corporations?

At Lit Hub, we’ve been publishing experts on climate change since 2015. If there’s a consensus among them, it’s that there’s enormous room for change, at every level of impact. Here are a few ways in, as individuals, communities, governing bodies, and storytellers.

If you only have a tiny garden do not despair, for even a balcony or roof terrace can provide food for pollinators like bees and hoverflies; on the tenth floor of a city-center building I have seen bumblebees turning up, regular as clockwork, ferrying food back to their nest hidden somewhere in the urban jungle. A few herbs such as marjoram or chives in pots will draw them in, with the added bonus of providing a tasty addition to your cooking. (Keep reading)

For this reason, I have little faith that technological advances in energy efficiency or carbon capture will solve our crises by carrying us magically toward a solution. Instead, I suspect, the answer lies in expanding or transforming our definitions of comfort, not in achieving it without critical reflection; in shattering our naive illusion of assured safety, which only ever makes our world more dangerous; and in recognizing the interdependence of our actions. (Keep reading)

Lydia Davis on Making the Decision Not to Fly

The decision not to fly does imply a limitation, but in a positive sense, I think. It results in a greater concentration on the local, on valuing what is here. Once I am not expecting more and more, looking outward farther and farther, a circle is drawn around what I have, but within that circle there is more attention, I look deeper inside the circle, and what remains has greater value. (Keep reading)

We can all be resourceful when we’re stewards, and we can all help rebuild local economies. We can think like this in every small community in the country: How can we grow what’s local? How can we find creative ways to plant our own gardens? And, beyond that, how can we produce all the materials we need ourselves, thoughtfully and respectfully, using the natural resources around us for guidance? (Keep reading)

Now that climate chaos is making the dilemma of our bodies more obvious to more of us, I wonder if that will change. As rents and oceans rise and more people move farther from our homes to survive, finding and creating new kinds of support networks could make the difference between well-being and preventable suffering, even life or death. (Keep reading)

In a just world, food waste would be redistributed by something other than a network of unpaid and untrained volunteers; in a just world, there wouldn’t be so many hungry people in need in the first place. But and also, in those moments, as we pushed together past the world as it was to the world we wanted to live in, we found ourselves in a kind of heaven. (Keep reading)

One thing we have learned from three decades of failed global climate negotiations is that there can be no effective global action as long as individual nation-states fail to take action on their own. Nations will have to adopt their own very ambitious climate goals and policies in order to lay the foundation for international coordination. National policies will also provide umbrellas under which local communities can take action, keeping the whole effort just, equitable, and small-d democratic. (Keep reading)

We Need an Agroecological Revolution

Thankfully, progressive governments everywhere, from the City of Philadelphia to the Pacific nation of Vanuatu and scores of others in between, have recognized the destructive nature of industrially produced food and begun to act accordingly. The progress is, to many, almost invisible. But it exists. Whether it’s enough remains to be seen, but agroecology is hands-down our best bet for changing agriculture’s role from a driver of the greatest problems afflicting humankind to a solution. (Keep reading)

to be successful, actions on climate change absolutely need to restore some semblance of social equality to our societies. Both the United Kingdom and the United States have fractured, unequal, malfunctioning societies, states that are no longer capable of taking action across a wide spectrum of activity. If we are going to get climate change to the top of the political agenda, we can only do so if it becomes supported by the center of the political argument, not just by people who sit on the extreme left. (Keep reading)

Naomi Klein’s Advice for the Next Generation of Climate Activists

“The hard truth is that the answer to the question “What can I, as an individual, do to stop climate change?” is: nothing. You can’t do anything. In fact, the very idea that we, as atomized individuals, even lots of atomized individuals, could play a significant part in stabilizing the planet’s climate system or changing the global economy is objectively nuts. We can only meet this tremendous challenge together, as part of a massive and organized global movement.” (Keep reading)

Climate Change is Here… So How Do We Adapt?

Climatologists, ecologists, and highly respected scientists, as well as government agencies and international organizations, have repeatedly warned us of the crisis that lies ahead. But, like the Roman emperor Nero, we fiddle while our world is in danger of burning up and warming beyond recovery. There’s an almost complete dearth of global leadership that looks not years or decades ahead but generations into the future and plans global strategies to create a safe world for our descendants. This is a truly global challenge that is unique in human experience and will exact a very high price indeed from us and from future generations. It’s no exaggeration to imagine that the future of humankind is at stake. (Keep reading)

Will humankind ever be able to move beyond its growth phase, mature and settle into a plateau? Can it, perhaps on the other side of that sixth wave of innovation, become like the Amazon—thriving, refining, improving sustainably over the long term, but without getting bigger? There are those who hope for a future in which humankind globally detaches itself from its addiction to growth, moves on from GDP as the be-all and end-all, and becomes focused upon a new, sustainable measure of success. (Keep reading)

Optimism isn’t enough for those young people (and old people) who have been bombarded by the science that tells them all is lost. A therapist in England, who founded an organization called Climate Psychologists to address growing climate anxiety, runs parent support groups on handling these feelings with young people. He advocates using “the rule of three.” For each negative climate-related fact, offer two positive stories. I can do that. You can do that. I am now awash in stories that illustrate agency. (Keep reading)

We live in a world where every day we are ruining the immeasurable heritage of the earth‘s beauty. … No one will feel this looming tragedy more than those who today are children. Every day that I wrote my five-year-old daughter would come to me and ask if Mangoshi, the seven-year-old heroine of the book, has saved the forest yet. Through her I saw that it is wonder that we need, and that the great feat of turning our civilization around so that it enhances nature rather than destroys it can begin with a child’s footsteps towards an impossible hope. Everyone, it seems, can do something small that would add up to the great change we need to save this magical globe that is our blessed home. (Keep reading)

How Contemporary Novelists Are Confronting Climate Collapse in Fiction

What Passes for Hope: 19 Writers on Finding Meaning in the Face of the Climate Crisis 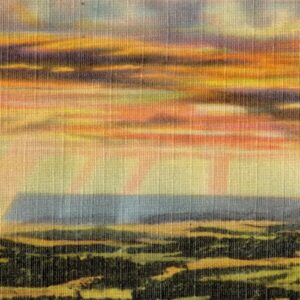 What Passes for Hope: 19 Writers on Finding Meaning in the Face of the Climate Crisis To meet this moment of climate crisis with anything other than despair demands so much of us: motivation, imagination, and action...
© LitHub
Back to top
Loading Comments...