Climate Change is Here… So How Do We Adapt?

By Brian Fagan and Nadia Durrani

For the first time, adapting to climate change has become as much a global issue as a local one. This is when the legacies of the past come to the forefront. The past has always been with us, offering encouragement, warning of pervasive dangers, and providing precedents for handling a crisis-ridden climatic future. Never have insights from ancient times been as important as they are today.

For the first time we’re causing massive climate change and interrupting the natural cycles of global climate. Rising carbon dioxide levels in the atmosphere, continuous and accelerating climbs in global temperatures, climbing sea levels destined to inundate enormous cities flourishing at or near sea level, chronic deforestation at human hands: ecological destruction surrounds us on every side in a world with over 7.6 billion people. Hundreds of millions of them live under threat of extreme weather events and drastic changes in great rivers like the Nile and the Mississippi resulting from anthropogenic climate change.

The litany of potential climatic and ecological catastrophe surrounds us on every side, most of it the direct consequence of human activity. This is a far cry from the kinds of climatic adaptations that faced the Andeans, the Indus Civilization, medieval European farmers, and the Mughals of India. We’re now at the moment when we have to confront unprecedented and utterly menacing global climate change.

Climatologists, ecologists, and highly respected scientists, as well as government agencies and international organizations, have repeatedly warned us of the crisis that lies ahead. But, like the Roman emperor Nero, we fiddle while our world is in danger of burning up and warming beyond recovery. There’s an almost complete dearth of global leadership that looks not years or decades ahead but generations into the future and plans global strategies to create a safe world for our descendants. This is a truly global challenge that is unique in human experience and will exact a very high price indeed from us and from future generations. It’s no exaggeration to imagine that the future of humankind is at stake.

The time for concerted action is at hand, and to ignore the lessons of the past, of hundreds of thousands of years of adapting to climate change is, to put it mildly, fatally shortsighted.

What are the lessons we’ve received from the past about adapting to climate change? They are brutally simple.

First, we are human beings, with the same behavioral qualities of every generation of Homo sapiens: brilliant qualities of forward thinking, of adept planning and cooperation, of intellectual reasoning and innovation. In planning adaptations to future climate change, we need to maximize these enduring qualities that will sustain us as we plan decisive adaptations for the future.

Second, we have developed a remarkable, and still rapidly improving, expertise at predicting climate change. The ancient societies described in these pages never had the benefits of scientific weather forecasting, satellite observations, the full array of proxies, and computer modeling that have revolutionized our knowledge of global climate and of the endless, unpredictable gavotte between the atmosphere and the oceans. The ancient Babylonians and others toyed with observations of the heavenly bodies as a way of predicting weather, without success, as did medieval European astronomers. Meteorologist Hubert Lamb remarked that weather predictions until the late 19th century were “church steeple meteorology,” observations that involved gazing at cloud formations and other weather signs from elevated viewpoints.

Fully scientific meteorology is a product of the 20th and 21st centuries. But much vital traditional climatic expertise still survives inconspicuously. Ancient Egyptian priests built Nilometers to measure and predict the annual inundation. Early European mariners knew the telltale signs of approaching gales; Caribbean islanders and Maya astronomers could sometimes detect impending hurricanes; Pacific voyagers took advantage of 180-degree shifts in prevailing Polynesian trade winds to sail eastward during El Niños. We tend to ignore the remarkable predictive expertise of people still living close to the land and the ocean. Given the local impact of much climate change, this is a mistake. Much of this traditional knowledge, transmitted by word of mouth, still exists but needs to be collected before it is too late.

Traditional knowledge, transmitted by word of mouth, still exists but needs to be collected before it is too late.

Third, in our preoccupation with global climate change, we forget that a great deal of adaptation to climate change, be it building seawalls or moving houses to higher ground, is a matter of local leadership and action. The local impacts of climate change emerge persistently in our narrative, and homegrown examples of successful adaptation abound. One notable example comes from Medmerry in southeastern England, where frequently inundated coastal land has been yielded to the ocean and turned into a nature reserve. Local adaptations, whatever the cost, are of paramount importance, even if they are the result of global climatic developments.

Fourth, we are social animals, which means that ties of family and wider kin, of community and nonprofit organizations with closely linked members, are a remarkable survival mechanism of fundamental importance in a world of unpleasant climatic crises. Such relationships have been part of human experience since the beginning. They are one of humankind’s most powerful adaptive weapons; yet we consistently ignore their potential. Moreover, as social animals in a settled world, we tend to exploit both each other and the environment—whether in a bid to demonstrate our high(er) status over others or indeed to simply secure our survival where resources are finite and sometimes shaky. It is possible, in our opinion, to link many wars to conflicts over resources, whatever the claimed ideological or religious pretexts.

Fifth, we live in an industrialized world with exceptional infrastructures with vast potential for the future. But we tend to forget that countless people still live from harvest to harvest, often with uncertain water supplies and high vulnerability to hunger and drought. Relief aid in times of extreme drought and hunger is admirable but is not a lasting panacea. We were both struck by just how little attention is paid to the workings of traditional agriculture with its built-in, intimate knowledge of local environments. The Pueblo farmers of the Southwest, the Kekchi Maya of Belize, and the raised-field farmers of the Bolivian altiplano are examples of just how much we have to learn from traditional agriculture practiced successfully and out of the limelight for many centuries. A powerful legacy from the past, agricultural knowledge transmitted by word of mouth, is in danger of vanishing.

Lastly, preindustrial civilizations were remarkable for their volatility when confronted by climate crisis. Time and time again, even powerful leaders faltered in times of exigency, especially when drought and other climatic perturbations negated their perceived supernatural powers. Those who survived, either by taking action or by adapting thoughtfully to transformed circumstances, were decisive leaders, capable of thinking ahead and of bold action. Some of the anonymous leaders of Chimor on the Peruvian coast thought long-term. So did occasional Chinese emperors, their efforts often derailed by sclerotic bureaucracies. The past reminds us that the ultimate catalyst for longterm success in combatting climate change will be charismatic, authoritative leadership that transcends national interests and attacks climate change from a truly global perspective.

The starting point must be the reality that we are a global community of Homo sapiens, for our future depends on leadership that is not preoccupied with election cycles and other such trivia. The past reminds us that, for the first time, we are facing a truly global challenge that we have never encountered in three million years. This is because we are causing it and because there are so many more of us who will be impacted. We hope this book reveals the truth of past climate change and what life was really like through the testimony of archeologists and historians.

Will humankind survive? If the record of the past is any guide, we shall. But we will need to adapt, or perhaps be forced to adapt. There will be numerous challenges, almost certainly with violence and numerous casualties. The past reminds us that we are ingenious and innovative, capable of rising to trials that are far greater than those of ancient times. When we look back, as we now can in ways not previously dreamed possible, we can see what worked and what did not. But, perhaps most importantly, it is clear that we need to unite and cooperate as a species. We will survive, and one reason we will is because we’ve achieved an understanding of the complex relationship between humanity and the world’s ever-changing climate. The past is not a foreign country—it’s part of all of us, and it holds the keys to the future. 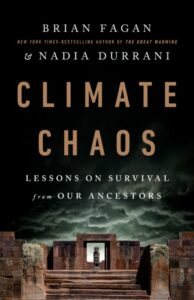 From Climate Chaos: Lessons on Survival from Our Ancestors by Brian Fagan and Nadia Durrani, copyright © 2021. Reprinted by permission of PublicAffairs, an imprint of Hachette Book Group, Inc.

Brian Fagan is one of the world’s leading archaeological writers and an internationally recognized authority on world prehistory. He is a Distinguished Emeritus Professor of Anthropology at the University of California, Santa Barbara, and the author of several widely read books on ancient climate change. He has lectured about the subject to audiences large and small throughout the world. His latest book is Fishing: How the Sea Fed Civilization (Yale University Press, 2018). Nadia Durrani is a Cambridge University-trained archaeologist and writer, with a PhD from University College London, in Arabian archaeology. She is the editor of THE PAST magazine and has a very wide experience in writing about archaeology for wider readerships. She is co-author of a portfolio of text books with Brian, and the trade books What We Did in Bed: A Horizontal History (Yale University Press, 2019) and Bigger Than History: Why Archaeology Matters (Thames and Hudson, 2019). 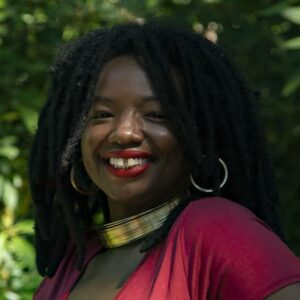 Featured photo of Kima Jones by Rohan DaCosta. This year, on September 19, 2021, I turned 39 years old. This decade is marked...
© LitHub
Back to top
Loading Comments...