Disasters the size of the whole Earth, several of which are now raging all at once, require a cooperative international response. No international agreements—the toothless 2015 Paris Climate Agreement included—have proven capable of rising to the challenges we now face. One thing we have learned from three decades of failed global climate negotiations is that there can be no effective global action as long as individual nation-states fail to take action on their own. Nations will have to adopt their own very ambitious climate goals and policies in order to lay the foundation for international coordination. National policies will also provide umbrellas under which local communities can take action, keeping the whole effort just, equitable, and small-d democratic.

Under the failed leadership of Team Trump, Washington totally bungled its response to the cascading events of 2020, in everything from public health to human rights, the environment and the economy. Despite countless vigorous efforts, it was beyond the power of state and local governments, civil society, or individuals to compensate fully for the White House’s repeated sabotage of national policies that could have averted much suffering, death, and racialized abuse. Similarly, any nation will fail to do its part to end the climate emergency unless its government takes decisive action to abolish greenhouse emissions and helps society equitably adapt to the economic consequences. The US government failed to do anything like that, and as a result we emerged from 2020 as the world’s worst miscreant in both public health and climate.

Vigorous national action alone, while essential, is not sufficient to resolve either the public health or the climatic crises we will continue to face. We learned the hard way that when an emergency as dangerous as the Covid-19 pandemic is not met with both decisive leadership in Washington and unprecedented actions on the ground in communities, workplaces, and households, failure is certain. This same principle has long been exemplified by our failure to address the climate emergency. Can a national umbrella policy for the fair and just elimination of fossil fuels, accompanied by local, democratic management of resource allocation, work as a single, seamless system while also serving as part of a global system for getting rid of fossil fuels? Can similar policies rescue local, national, and global food systems?

There is growing awareness that we must stop using oil, gas, and coal, and that doing so will require that fossil fuels be removed from market control. The fuel industries and their oil, gas, and coal reserves must, therefore, be nationalized. In a 2020 white paper titled “Out of Time: The Case for Nationalizing the Fossil Fuel Industry,” a group of scholars in energy and economics laid out a tight, convincing case that a public takeover of all fuels is the only way “to overcome many of the systemic hurdles that prevent meaningful action, allowing us to move towards decarbonization in a way that is planned, provides for workers, and supports communities.” The authors were writing during the early days of the pandemic, when the dollar value of fossil fuels had crashed. Anticipating that prices would remain low for years, they suggested that the U.S. government could buy out the industries and ensure a just transition for their workers (but not for their executives and investors), at bargain prices with money borrowed at historically low interest rates.

Nationalization will be necessary because fossil-fuel industry executives, knowing full well the role their products have played in triggering catastrophic warming of the Earth, continue to deceive the public while pumping, mining, processing, and selling fuels at handsome profits. The companies are committed to this course of action and could not cease and desist even if they wanted to; as the authors put it, “Their heavy investments in fossil fuel reserves, extraction, and transport means that they need to keep extracting and selling to the market for decades to come to recoup the costs of the capital-intensive infrastructure.” (US electric utilities are certainly counting on the persistence of fossil fuels; they are planning to build a staggering 235 new natural gas–fired power stations in coming years.) The oil and gas companies will continue to use their vaunted political power to resist all efforts to reduce their output. If fossil fuels are to be kicked out of the economy for good, the authors of “Out of Time” argue, they must be nationalized; furthermore, they urge, extraction and use of the fuels must be reduced at a rate of 6 percent per year until we are finally and completely free of them.

Nationalization and a rapid decrease of the fossil fuel supply would have to be accompanied by policies to protect workers in the oil, gas, and coal industries.

There is ample historical precedent for nationalization around the world and even in the United States. During World Wars I and II, the government was compelled to take control of critical resources and industries: coal mines, meatpacking plants, shipyards, railways, the telegraph system, and much more. Unable to convince manufacturers to scale up production of essential goods, or to stop expending scarce resources on production of nonessential goods, Washington had no choice but to nationalize factories. The “Out of Time” authors point out other cases of nationalization in the immediate postwar years, as well as the government takeover of more than 1,000 savings and loan institutions during the scandal-ridden financial crisis of the late 1980s and early 1990s.

They argue that in the current century, the simplest way to nationalize would be for the Federal Reserve to simply buy a majority share in every fossil fuel company. At the time they were writing, the entire industry was valued at about $700 billion, making the buyout much more affordable than the corporate bailouts handed out during the Great Recession and Covid-19 pandemic. In fact, it should be easy, at that price, to have a forced buyout of the whole industry rather than just buying a majority share. That would avoid endless conflict with minority shareholders.

Nationalization and a rapid decrease of the fossil fuel supply would have to be accompanied by policies to protect workers in the oil, gas, and coal industries as well as energy consumers throughout society. This “just transition” will require creation of good new jobs in other sectors for workers currently in fossil fuel and related industries, along with retraining and social support. The authors note that “not every job lost will be matched by a job created at the same location,” but that geographical mismatch can be evened out by fostering new employment in all marginalized communities and economically disadvantaged regions, whatever the cause of their economic stress.

The just transition will also require the restoration of landscapes and waters that have been ruined by extraction of fuels, and the return of those lands and waters to Indigenous communities from whom they were stolen. It will require dismantling of refineries, power plants, and all the rest of the vast infrastructure that processes and transports fuels, and remediating the air, land, and water that has contaminated the people surrounding the refineries—most often communities of color and first-generation immigrants.

If it’s to be accomplished quickly enough, the phase-out of fossil fuels has to occur simultaneously with, and move faster than, the development of new energy sources and infrastructure. Therefore, the phase-out must be accompanied by systems to ensure that communities are protected from energy shortages. That will require much more equitable access to energy. Today, more affluent, predominantly white households have much higher than average consumption of energy in all forms, while millions of lower-income households cannot afford as much energy as they need. Just as market forces are unable to reduce the supply of fossil fuels at the source, they are powerless to ensure that some businesses and households don’t hog the diminishing energy supply while other workers and consumers cannot get access to a share of energy sufficient to get to their jobs or keep the heat and lights on at home. Here, where the market fails, fair-shares rationing must bridge the gap. 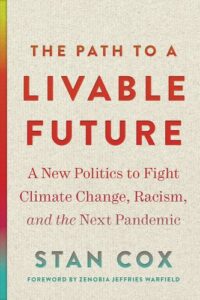 “A To-do List for the 2020s” from The Path to a Livable Future: A New Politics to Fight Climate Change, Racism, and the Next Pandemic. Copyright © 2021 by Stan Cox. Reprinted with the permission of City Lights Books. 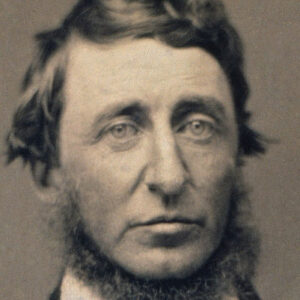 1837 was not a good year to graduate from college. Following the financial panic that spring, banks contracted credit and the economy...
© LitHub
Back to top
Loading Comments...