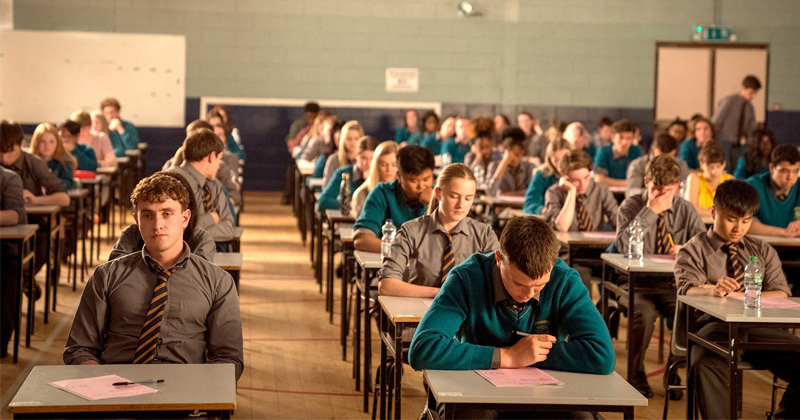 Dispatches from an extra on the set of Hulu’s Normal People.

Once, years ago, on a drive through rural east Galway, I heard a radio advertisement for a warehouse sale taking place that week. “Everyone’s talking about ceramic tiles and low cost wooden flooring!” it boasted. Well, the time of flooring is past, and now everyone is talking about Sally Rooney’s Normal People.

The story itself is compelling, but part of the book’s charm is the ease with which any overly educated, middle class college graduate can project themselves into the familiar rhythms of campus life evoked in the text. It’s even easier if you, like me, are a Trinity College graduate who was in the same year as Sally Rooney herself, and who feels a complicated, aching nostalgia for their years in university. I was in that exact place at that exact time. I listened to those Animal Collective CDs in those bad cars on those exact motorways. The earnest political discussions the characters have I feel as a near physical pain.

The discordant siren song of postgraduate research brought me back to Trinity College just as Normal People Mania was taking hold. This past summer, shooting was announced for the shiny new BBC/Hulu adaptation of the novel, which would be directed by the Oscar-nominated Lenny Abrahamson, himself a graduate of the university. Abrahamson has been my favorite director since I saw his underrated 2012 film What Richard Did. It’s an absorbing, uncomfortable realist story of privilege and violence and remains the only accurate portrayal of the bizarro world where I grew up, South Dublin, that I’ve ever seen on screen. I answered the casting call for extras on Normal People because why not act out some sort of strange meta version of your early twenties, given the option?

Trinity College dates from 1592, and boasts lots of dazzling old buildings that as an undergraduate you can easily never go into. Some scenes were filmed there, but most arts lectures in reality take place in a stifling concrete bunker from the 1960s that has been variously described as “a nightmarish hanging garden without the garden” and “a Soviet airport.” Trinity doesn’t look enough like Trinity for television, so the classroom scenes I took part in were shot at All Hallows College a few miles away. (In true Simpsons fashion, you must tape a bunch of cats together to get something that looks like a horse.) On set it quickly became apparent that I was the oldest “acting support” (a kind way to say “extra”) around. We had been sent mood boards in advance and asked to bring several of our own outfits that emulated these photos. The costume managers were impressed at the accuracy of what I brought. I declined to tell them that more than one of the photos they had sent around was of someone I knew as an undergrad. All that was required was to reach to the back of the closet and dress up as Vintage 2012 Jack (With New Hat). My role was as a student in a tutorial. “Look as if you haven’t done the readings,” someone said. It’s the part I was born to play, baby.

The experience was almost ludicrously pleasant. I listened to the actors talk. I shuffled my papers. I tried to do a normal man walk out of the classroom. And then I did it again eleven times. Everyone from the director on down was warm and charming. Lenny Abrahamson even learned the extras’ names as he shot, directing us calmly, as if we were real humans. I mentioned it to a producer I got chatting to, and said I thought film sets were supposed to be hell. “The people making this are nice,” she said. “Their film sets are good places. Don’t get used to it.”

From the trailers released so far, the final product looks extremely slick, replicating the soft naturalism and intimacy of the book. The only complaint I have is a slight time disjunction. The period depicted in the novel is quite precious to me. It begins in the teeth of the Irish economic crash. We were students then, and the damp, dreary city was ours. But the clothes and the feel of the world in the series straddles that time and the present day. Dublin now is a very different place. It’s no longer fashionable to look like total dogshit. Rents have doubled. Cocaine has replaced pills. Pubs are uncomfortably jammed. The boom is back for some people. Normal People was very specific to that earlier time, and I loved it because it put me in mind of my lovely, shitty Dublin that disappeared while I wasn’t looking. I’ll be looking out for myself on screen, obviously. And for glimpses of the old world where we lived, obviously. You’ve been reading this long, you’ll greedily inhale it all too. Obviously.