This diary reveals—often in the words of those who were there—what happened on each of eight momentous days, exactly 75 years ago, as Roosevelt, Stalin, and Churchill not only defined a new world order but bequeathed a problematic legacy to our time. (Head here to read day one of the Yalta diaries.)

Mid-morning: Livadia Palace
Dr. Howard Bruenn, Roosevelt’s heart specialist, has told Anna Boettiger how ill her father really is. She writes to her husband that his “ticker situation is far more serious than I ever knew … It’s truly worrisome—and there’s not a helluva lot anyone can do.” She adds: “Better tear off and destroy this paragraph.”

Mid-morning: Churchill’s bedroom, Vorontsov Palace
A British diplomatic pouch arrives for Churchill. Sitting up in the large double bed brought specially from Moscow to Yalta at his request in which he works as well as sleeps, he reads the papers and cables. One informs him that in Greece, where he has been trying to stop a civil war and a Communist takeover, there is fresh unrest. The news does not improve his temper.

Noon: Yusupov Palace
US and UK military chiefs meet their Soviet counterparts, led by General Antonov—their first tripartite meeting. The Soviets promise to maintain maximum pressure on German forces in the east during March and April while in the west US and UK troops cross the Rhine. In return the US and UK commanders commit to doing all they can to prevent the movement of German troops to the Eastern Front. To reassure the Soviets about Anglo-American air superiority, they report that USAAF and RAF bombers have hit important road and rail targets in Koblenz, Wiesbaden, and Karslruhe and that 1,000 Allied bombers have attacked Berlin. They argue for direct lines of communication between US, UK, and Soviet forces, but Antonov stalls. He knows Stalin, who makes all the top military decisions, does not want his commanders liaising directly with their Allied counterparts.

13.00: Yusupov Palace
Molotov hosts a lunch for the Foreign Ministers. They toast Averell Harriman’s “thrilling news” that US forces under General MacArthur have this day entered Manila, capital of the Philippines.

16.15: The Grand Ballroom, Livadia Palace
The second plenary session. Stalin is already in the hall waving to photographers. Cameramen capture Churchill’s arrival. A Soviet newsreel will tell its audience, “first the huge cigar entered, which was followed by Winston Churchill.” The doors to Roosevelt’s rooms open and his valet wheels the President into the ballroom.

Roosevelt looks weary and has a hacking cough, perhaps unsurprisingly, given that he and nearly everyone else around the table is smoking. When he proposes they discuss Allied zones of occupation in a conquered Germany, Stalin throws out a list of questions:  How should they handle Germany’s surrender, especially if Hitler’s power base collapses? What reparations should Germany pay? How exactly should a conquered Germany be dismembered? “Hasn’t the time come for decision?,” he asks. 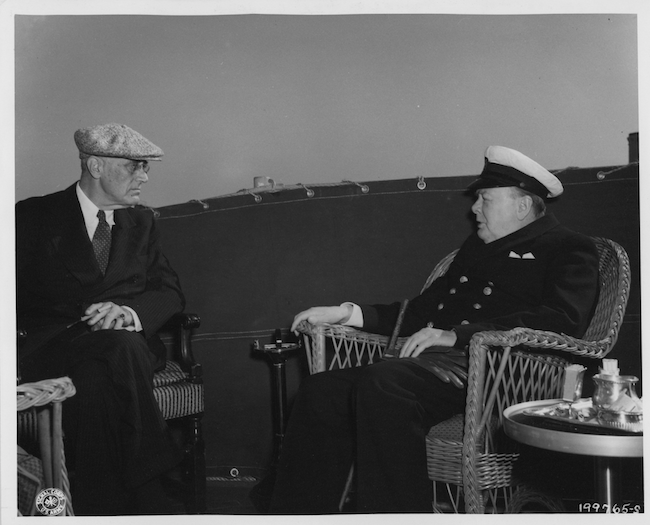 Roosevelt and Churchill aboard the USS Quincy, Valetta Harbor, Malta on February 2, 1945, the eve of the Yalta Conference. Photo: Franklin D. Roosevelt Library.

Churchill counters that dividing Germany up is far too complex an issue to be resolved quickly. Stalin demands that the Nazi Government be told that under the unconditional surrender the Allies are demanding Germany will be broken up. Churchill counters that this will only “make the Germans fight all the harder.” Sensing impasse, Roosevelt’s adviser Harry Hopkins scribbles him a note suggesting Foreign Ministers be asked to consider these complex issues. Roosevelt proposes this and Churchill and Stalin agree.

Roosevelt then casually announces that American troops will not stay in Europe “much more than two years.” To Churchill this is a “momentous statement” about which Roosevelt has not forewarned him. It will leave Britain “to occupy single-handed the entire western portion of Germany … a task far beyond our strength.” He says France must be given a zone of occupation in Germany and be a full member of the Allied Control Commission that will administer a defeated Germany. A contemptuous Stalin demands why France, “which opened the gates to the enemy,” deserves this. While France can have a zone of occupation, it should have no place on the Control Commission. Roosevelt sides with Stalin.

“He talks of France as a country without a past. Does he not know her history?”

Stalin then demands German reparations of $10 billion for the Soviet Union. An agitated Churchill reminds him where bleeding Germany dry after the First World War led. Who will pay for food for “a phantom, starving Germany” if it is punished beyond its means to pay? “If you want a horse to pull your wagon you have to give him some hay,” he argues. “That’s right, but care should be taken that the horse does not turn around and kick you,” Stalin retorts. Observing the exchange, Andrei Gromyko, then Soviet ambassador to the US, notices how agitated Churchill is becoming: “His cigars give him away. He smokes far more of them when he is tense or excited. The number of his cigar stubs is in direct proportion to the stresses of the meeting.”

Again Roosevelt sides with Stalin—he will “willingly support any claims for Soviet reparations.” A frustrated Churchill suggests a US/UK/Soviet commission be set up in Moscow to deal with reparations. Stalin agrees but insists the three powers who have made the most sacrifices must have first claim. Churchill speaks out for the smaller countries that have also suffered. Slyly quoting Marx he argues, “each according to his needs.”  Stalin snaps, “I prefer another principle—to each according to his deserts.”

20.15: After agreeing the United Nations and Poland will top the next day’s agenda, the meeting breaks up.

Later that evening: Roosevelt’s apartments, Livadia Palace
Harry Hopkins tries to convince Roosevelt to support Churchill over France, arguing it is a “political  impossibility to endeavor to administer Germany without the participation of France, her hereditary enemy and neighbor and our oldest friend.”

Later that evening: Churchill’s apartments, Vorontsov Palace
A depressed Churchill considers Stalin’s attitude towards France: “He talks of France as a country without a past. Does he not know her history?” That night he tells his daughter, “I do not suppose that at any moment in history has the agony of the world been so great or so widespread. Tonight, the sun goes down on more suffering than ever before in the World.”

Later that evening: Yusupov Palace
Stalin, pondering Roosevelt’s comment that American public opinion requires the quick return home of US troops from Europe, reflects “the weakness of the democracies lies in the fact that the people do not delegate permanent rights such as the Soviet Government possesses.” That day Time magazine has a picture of an avuncular but purposeful-looking Stalin on its cover. Inside an article declares the Soviet Union “an historic force” and that “barring the possible existence on earth of undetected saints and major prophets, about the most important person in the world last week was Stalin.” His “gigantic armies” were ripping out the guts of German forces in the East.

CHECK BACK TOMORROW FOR A DIARY OF DAY THREE. 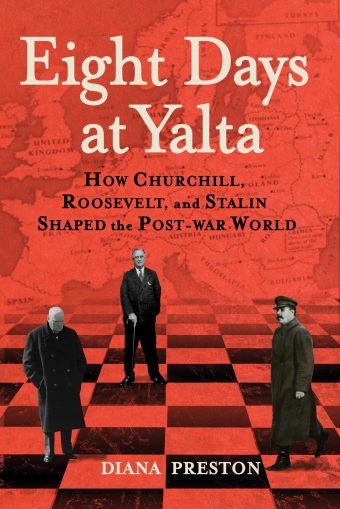 Eight Days at Yalta: How Churchill, Roosevelt, and Stalin Shaped the Post-War World, by Diana Preston is available now from Grove Atlantic.

Diana Preston is a prize-winning historian and the author of The Evolution of Charles Darwin, Eight Days at Yalta, A Higher Form of Killing, Lusitania: An Epic Tragedy, Before the Fallout: From Marie Curie to Hiroshima (winner of the Los Angeles Times Book Prize for Science and Technology), The Boxer Rebellion, Paradise in Chains, and A Pirate of Exquisite Mind, among other works of acclaimed narrative history. She and her husband, Michael, live in London.

Life in a Freewheeling, Buoyant Dystopia (With Baseball at Its Center) 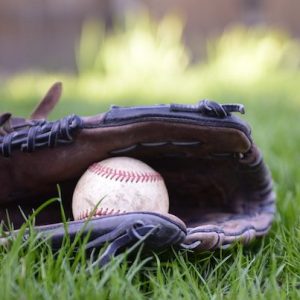 Life in a Freewheeling, Buoyant Dystopia (With Baseball at Its Center) Gish Jen’s new novel The Resisters is set in a near-future dystopia called Auto America—where half the land is under...
© LitHub
Back to top
Loading Comments...