Andrew Keen Thinks We Should All Read Peter Zeihan

Trust a guy named Zeihan to capture today’s zeitgeist. In his deliciously titled new book, The End of the World is Just the Beginning, the global strategist Peter Zeihan not only predicts an imminent collapse of globalization, but he also captures the chilling uncertainty of the 2020s.

“We have been living in a perfect moment. And it is passing,” he warns. “The world of the past few decades has the best it will ever be in our lifetime.”

Everything is about to change, Zeihan promised me on Keen On earlier this week. Goodbye globalization. Goodbye venture capital. Goodbye trade and consumption. Mexico will become the new China. China will be the new Japan. The United States, of course, will no longer be the United States. Most of all, he predicted, politics is going to dramatically change over the next decade. By 2032, political parties and ideologies will be unrecognizable from today.

That’s the most chilling thing of all. For all our grim foreboding about one kind of pandemic or another, nothing much has changed yet. In 2022, we are still in the calm before the storm. Having a front seat on Peter Zeihan’s vision of the end of the world is like watching the opening credits of a disaster movie before the shooting has started. Apocalypse almost now.

We are back to what the German historian Philipp Blom described as The Vertigo Years of the early 20th century. Everything is in flux. Everything is unbalanced. Thus our Zen-infused longing for “balance.” The academic Paul Thagard even came on Keen On this week to talk about his new book titled—yes, you guessed it—Balance. The Canadian philosopher couldn’t be more out of touch with our vertiginous age. It might be Thagard’s reality, but it’s certainly not ours.

Think of the world like the US healthcare system, the pandemic infested eye of the post neoliberal American storm. It’s so broken, so fucked-up, that you’d think it must change. And yet nobody knows how. Not even eminent American physicians like Robert Pearl who came on Keen On this week to talk about how the epidemics of COVID, anxiety and gun violence are all fatally entangled. Yes, I guess that it’s darkest before dawn. Which isn’t very reassuring for those of us stumbling around in the darkness.

When everything collapses around us, our natural impulse is to look backwards rather than forwards.

We did get a sneak preview of political change in my Keen On conversation a couple of weeks ago with Jennifer Senior about the American Rasputin, Steve Bannon. Dramatic change is afoot on the political right. But the same is imminent on the left too. As the British academic Steven Jones told me this week, progressives haven’t had an original idea for half a century. So expect an epidemic of unbalanced Rasputins on the left too. And don’t imagine that they will be any more morally tailored or sartorially palatable than Steve Bannon.

Peter Zeihan offers us a post-Silicon Valley future. But not one without technology. But I wonder if futurists put the cart before the horse when thinking about tech. Disruptive tech isn’t so much our future as its augury, an omen of dramatic change. So, as Keen On guest Jamie Bartlett told me this week, OneCoin, the multi-billion dollar crypto ponzi scheme orchestrated by Ruja Ignatova, the Bulgarian-born Oxford-educated “Cryptoqueen,” is as much a reflection of our unregulated, unaccountable neoliberal financial system as of disruptive Web3 style technology.

OneCoin, then, is a dirty-money horror story in sync with our kleptocratic times which crusading journalists—from Keen On guests like Catherine Belton, Tom Burgis and Oliver Bullough—have exposed. The promise of “disruptive” tech is the lie that got sold to the tens of thousands of OneCoin’s idiot retail investors. But it’s not just OneCoin.

Future historians will view the whole crypto fraud and the 2022 meltdown of pyramid schemes like Celsius as an augury of the end of our globalized world. Crypto, then, might be a form of nostalgia, a populist grasping at financial straws, a longing for yesterday rather than tomorrow, an impossible attempt to maintain what Peter Zeihan calls our “perfect moment.”

But not all 21st-century technology is fraudulent. As two excellent futurists, Jenny Kleeman and Debora Spar, argued on Keen On this week, some new tech is changing our idea of life itself. And it’s no coincidence that we are having these conversations the same week as the nostalgists on the Supreme Court are trying to turn back the clock and transform America into the Atwoodian dystopia that the great Atwood herself discussed with me last year on Keen On.

The really sexy (if that’s the appropriate word) question is whether the Supreme Court’s cult of fecundity can protect “life” in Jenny Kleeman’s high tech future of “sex robots and vegan meat.” If everything else can be cooked up in high tech labs, then what of life itself? Banning abortion or condoms might be a 19th-century fix for a 21st-century problem. Even Clarence Thomas might not have a regulatory fix for this.

In Handmaid’s Tale, you’ll remember, Margaret Atwood warned that the greatest casualty in a society organized around the cult of fecundity is love. And that’s a warning echoed in Debora Spar’s new book, Work Mate Marry Love. For Spar, however, the end of the world of love is a feature of our internet age. Social media, Spar told me, is killing both the theory and practice of love. Young people on Tinder or Match, she says, don’t believe in it anymore. It’s just another variation on the passing of Peter Zeihan’s “perfect moment.”

There’s one thing, I think, that Zeihan’s book misses. When everything collapses around us, our natural impulse is to look backwards rather than forwards. As Walter Benjamin recognized in The World of Art in an Age of Mechanical Reproduction, nostalgia is the most concrete cultural manifestation of societal flux. So the new thing at a time when The End of the World is Just a Beginning, is a romance for the past. Nostalgia for prosperity. Nostalgia for work. Nostalgia, above all, for love.

And this nostalgia for love was captured in a Keen On conversation I had this week with Emma Brodie, the young author of Songs In Ursa Minor, a novel based on the 1971 love affair between James Taylor and Joni Mitchell. The funny thing is that the counterculture might now be remembered by young writers like Brodie as love’s last stand.

And in a week when an 80-year-old Paul McCartney performed with age-defying magic at Glastonbury, I asked Brodie what we will do when artists like McCartney and Mitchell and Taylor are no longer with us. Mmmmn, that’s a good question, she said. But, in June 2022, at a time when our perfect moment is passing, she didn’t have the answer. 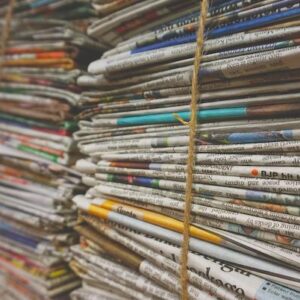 The following first appeared in Lit Hub’s The Craft of Writing newsletter—sign up here. * One challenge I frequently...
© LitHub
Back to top