Writers, Veterans, Citizens Take to the Halls of Congress

Roxana Robinson Heads to Washington to See What Democracy Looks Like

When I went to Washington to protest the Muslim ban, I was also there to find out what democracy looked like.

I was with a group of writer-veterans and American Muslims. I was part of their community because I wrote a book about a veteran, and because there are few groups I’d rather protest with. Vets are informed and forceful. In today’s noisy arguments, veterans’ voices have an unassailable authority. And the Muslims would speak from personal experience, reporting from the battleground of religious interaction.

Our first meeting is at the State Department. There are 15 of us, and we sit at a long table with a senior staffer. We go around the circle. I explain that I’m the President of the Authors Guild, and that we see the Muslim ban as a free speech issue. We believe that denying entry to thousands of journalists, authors, professors and translators sends a chilling message regarding that most fundamental of our democratic rights, and to do so on religious grounds adds a second layer of discrimination.

The man next to me is Rasool, an Iranian. He’s in his forties, soft-spoken and well-dressed. He’s getting his PhD here, he’s an imam in a local mosque, and he also teaches at a private Muslim school. “I speak at Friday prayers to my congregation,” he says. “I’ve always told them that the lines are blurred, in this country, between the religions. That hands are stretched across these lines in friendship.” He pauses. “I can’t say that now. And at the school, I’ve always told the children that America was the highest example of religious tolerance in the world. I can’t say that now.” He takes out his cell phone. “Let me read you a quote, from the leader of Iraq.” He reads. “’I want to thank the new US president for doing in two weeks what we have spent the last ten years trying to do.’” He looks up. “He means, to drive a wedge between the two countries.”

The staffer nods. “Thank you.”

Andrew, our organizer, served four tours in Iraq and now teaches at American University. He says, “We’re hearing from our friends in the field that this is having catastrophic consequences. It has hurt all our friends and allies. Counterterrorism is a thinking man’s game. This is a blunt instrument.”

Jerri is in her fifties, retired from Navy Intelligence. She worked in Moscow. “In counterterrorism,” she says, “the work is based entirely on trust. The relationships take years to develop. The reason people cooperate with us is that they have a more appealing view of our country than they do of theirs.” She pauses. “They won’t have that view now. Now they see that we’ll turn on our allies. This ban has badly damaged our national security.”

Colin was a tank commander in Iraq, and now teaches college English. He says, “This is a moral issue for me. I was fighting there because I believed in our values, and the people who helped us believed in them too. Our interpreter believed in us. His son was kidnaped and tortured because he worked for us. I still believe in our values, and this ban is a violation of trust. What does it say to our interpreter, who lost his son?”

The staffer says, “Sometimes we receive directives that we have to adjust to,” he says. “I can tell you that we agree about the knock-on consequences of this.”

We go on around the table.

Matt, who was an Army captain in Iraq, says that the new president of Somalia is a professor from New York. Isn’t this the kind of relationship we want, inviting people here to study under a free system, so that they can go back to the Muslim world and teach others what they have learned from our democracy? Instead of blocking them, and sending a message of hate and fear? And besides, he says that he’s been told we already have the most stringent vetting procedure in the world.

The staffer sighs. They hear us, he says. There is a deep abiding anxiety about terrorism in this country, and it connects to skin color, clothes, ethnic identity. We all have citizen obligations to form bonds throughout our communities and reduce the anxiety.

We leave feeling heartened. I like his candor, and I like the phrase “citizen obligation,” which makes me feel as though we really are all in this together. So I like this vision of democracy.

Senator Markey is a Democrat from Massachusetts. We sit around the table while his aide listens to us.

Hussein is from Somalia. He’s a former Marine who served in Ramadi; now he works in counterterrorism in Somalia. He has told the Somalians that Americans do not hate Muslims. But Somalians believe only the leader of the country. “Now,” he says, “if I try to say this I’ll be laughed out of the room. I can’t imagine how I could respond. It has has done severe damage to what I do.”

Rasool says thousands of refugees are trying to flee Daesh. Americans don’t need to be protected from the refugees. How is this a matter of national security? The aide says, “You have identified the biggest mistake in the president’s reasoning: confusing victims of war with the perpetrators of it. And we have the most stringent system of vetting in the world.”

The aide is brisk and courteous. “Thank you for coming in,” he says. “The Senator agrees with everything you’ve said.”

At Senator Joe Manchin’s office, from West Virginia, we sit in the conference room and the aide takes notes. Matt, the former Army captain, says that we’re a nation of immigrants, whether we came in the 19th century because of the potato famine, like his family, or last year, because of civil war, like some of the people in this room. He says that this ban contradicts the most fundamental precepts of America.

Remaz is a young Muslim woman whose family came from Sudan. She is tall and graceful, in pants, high boots and an elegantly wrapped blue hijab. She has lived here since the age of six. “America is my country. I have no other.” She majored in conflict resolution, and she’s studying for her L-SATS. She also runs a youth group for young girls. After the election, she says, the girls were in tears, afraid of what might happen to them. “I told them not to be scared,” Remaz said, “but I understood why they were. A man tried to run me over in his truck because of my headscarf. When I dodged out of the way he rolled down the window and yelled, ‘You’re not in Iraq now, bitch!’”

The room is silent.

Another Muslim woman says that West Virginia has a disproportionate number of Muslims in the health care system. If all the Muslim green cards were revoked, she says, the hospital would close.

The aide laughs. “I’ve heard that,” she says. “Thank you for coming in. Senator Manchin is one of the most liberal Democrats in the caucus, and he’ll meet soon with the president, and I hope this will be part of the conversation.”

Our last visit is to Senator Marco Rubio’s office. We are told to wait in the hall. A man with greying hair comes up and asks if we are vets or something. We say we are, and he leads us down the hall. We think we’re heading for a conference room, but he walks to the stairwell. Here he stops and faces us, backed by three flags and two aides, clean-cut young men with clipboards. We form a ragged circle facing him. A school group floods down the hall toward us, laughing and talking.

The staffer tells us that he’s Director of Outreach. “At least I think that’s my title. Is it?” he grins at an aide, who nods. “Why don’t you go around the circle and tell me what you’d like to say.”

The acoustics are terrible in the big open stairwell, opening onto the marble corridor. The elevator is beside us, and people move through us constantly, talking. Our voices are blurred, our circle disrupted. As we talk the staffer stands before each speaker, turning his back to everyone else. He disagrees with us. When we speak against the ban he corrects us.

When Jerri explains the damaging message it sends to our allies in other countries, the staffer asks, “Don’t you think that damage was already done by the previous administration?” Jerri doesn’t answer, because it clearly wasn’t.

Colin, the tank commander, says we have created waves of refugees in these countries, and now we have a responsibility to take them in.

The staffer disagrees. Apparently Hillary Clinton is to blame. “That list was made by Clinton and Barack Obama. You have to look back before the last two weeks to see when the damage was actually done.”

I don’t know what list he’s talking about, and I can’t really hear because his back is to me. The acoustics are so bad I’m not sure if he said “List” or something else, and the constant interruptions make it impossible to have a discussion. Even Remaz is rattled, and speaks quickly and impersonally. The staffer goes around the circle, disagreeing with anyone who criticizes the ban.

Then he stands in front of the flags, flanked by his aides.

“I understand that everyone here is hurting to a certain degree,” he says. “All I can do is make sure that the Senator hears what you’ve said.”

“Can you give us an idea of his response to this policy?” someone asks.

“Not yet, but he’s a thoughtful guy. We look forward to hearing it.”

The staffer looks genially around and we look silently back: the Army captain who’s heard catastrophic reports from the field, the woman in Navy Intelligence, the imam who can’t answer his congregation, the Somali who can’t answer his friends. The tank commander who feels betrayed. Remaz, who nearly died because of her blue hijab. The staffer nods as though we’re all set. He looks at me and grins.

“Did you get everything down?” he asks.

He starts back down the hall, aides following with their clipboards. We are silent.

On the Sickle's Edge 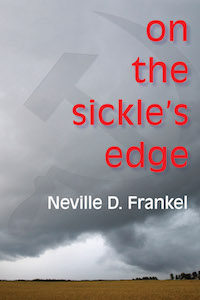 On the Sickle's Edge

As the train pulled into the station and passengers began stepping down, I watched people on the platform staring at me—a...
© LitHub
Back to top