Something about the rhythm of how we breathe while we’re in the water changes us. Deep breathing research is in its infancy, but we know that this pace of breath is soothing—there’s a feedback loop between our breathing patterns and the nerve centers that fire our anxiety responses. When we’re stressed, we tend to take short, rapid breaths; if we breathe deeply and slowly, that counteracts the stress and dampens our alarm system. In this way, our arousal and breathing centers are reciprocally linked. Swimming is particular in its activation of deep breathing. It’s the nature of the exercise: you take a big breath, hold it, and then release it slowly.

Kim has unusually large lungs, perhaps the ideal bellows for big, slow breaths. On the day we first met, she showed me the spot above her collarbone where an acupuncturist once poked a needle into her lung by accident and collapsed it. Those lungs carry her far when it comes to expedition swims. The breaths, then, make swimming like moving meditation. We take a breath. We hold. We pull, and glide. We take another breath. In between breaths, the thinking happens—about each stroke, each kick, each breath. As we become better swimmers, there is less conscious thinking about swimming and our thoughts are released, free to wander as they may. All the while, the body works. We notice things: how the water moves, what the temperature is like, whether the swimming feels easy or difficult. We are at once hyper-aware and loosed from our bodily constraints.

“Swimming in water is the only state of being I know where I feel free,” writes Yuknavitch. A former competitive swimmer, she has written at length about swimming for well-being, especially as she ages. Water, she says, helps a body remember that life and time are fluid: “I look a little lumbering and soft, aged and lumpy. But put me in water . . . put me in water for even ten seconds, and I will prove to you that a body is anything you want it to be.”

I ask Tanaka, the longevity researcher, what makes swimming so good for aging bodies. Weightlessness, he says. Physical activity without the pain and damage of land-based impact. Coolness, and buoyancy, to reduce inflammation and support the body. And one more thing, the most important thing.

“I will tell you the one thing that distinguishes swimming from all other forms of exercise.” I listen carefully. “People enjoy it a lot more.” I wait. That’s it? He goes on to relate something we all know in our bones to be true: Tons of us have New Year’s resolutions to exercise; after six months, half of us drop out. But this is where swimming has a huge benefit and advantage. “We do assessments of mood state,” Tanaka explains. “And with identical exercise programs in running, cycling, and swimming, people place the highest enjoyment in swimming.” In other words, people keep swimming because they like it. Swimming is the second most popular recreational activity in America, outranked only by walking. But swimming is the one that quite literally takes us out of our element.

We swim, and we get out from under the thumb of the everyday. “There’s a giddiness to being in that water,” Kim observes. “It connects with a playfulness that we forget about as adults.” I think about the way that the serious-looking older man in the pool this morning dove under the lanes on his way out, spiraling down to the bottom, arms outstretched, as if he had all the time in the world. And I think about children in the pool during afternoon family swim, their elation so palpable. Swimming is a way for us to remember how to play.

I’ve come to appreciate open water—an ocean, a lake big enough to generate its own waves—as its own animal.

Once, in thick autumn darkness while sailing around the islands off the coast of British Columbia, I jumped off the back of the boat and into the unknown—the icy water in that moment looked impenetrably black—just for the chance to make a phosphorescent snow angel. Clouds of glowing bio-luminescence bloomed around me as I treaded water, a kind of aquatic light show. When I climbed out of the water and rubbed my arms vigorously, sparks flew.

This is the wonder for which we immerse ourselves, says the surfer Dave Rastovich: “We forget our bodies as we know them and we just . . . swim.”

Years ago, a close friend and I cemented a friendship that began in college by splashing our way around Hawaii, starting on his home island of Oahu. We visited other islands, too, like Kauai, where we waded into the Pacific at Polihale Beach, a remote 17-mile stretch of white sand at the end of the long, rutted dirt road that seemed as far away as you can get from anywhere.

We swam in that heaving body of aquamarine, and what I remember most is the profound feeling that the ocean water had weight. In the years since, I’ve come to appreciate open water—an ocean, a lake big enough to generate its own waves—as its own animal. I see swimming as a way to get to know a place with an intimacy that I otherwise wouldn’t have.

The pleasures of swimming in a place can be everyday, routine, familiar. In 1779, a lieutenant of Captain James Cook’s admired the native Hawaiians’ swimming abilities with an entry in his ship’s log: “The Women could swim off to the Ship, & continue half a day in the Water”; in Hawaiian, Polynesian, and other enduring island cultures of the Pacific, he observed, the men, women, and children seemed “almost amphibious” from birth. This is as lovely a description of the freewheeling freedom of swimmers as any I have come across.

I feel that freedom when I’m swimming in San Francisco Bay, but I am just as aware of the hazards that are ever present at its edges. Because of the cold, there’s another layer of intensity to the open-water experience. “You don’t belong here,” Kim tells me, matter-of-factly, “but you do it anyway.” With the cold, the swim is like a fire drill for your body. “It’s fight or flight that’s engaged when you’re in that water,” she explains. “Everything is telling you that you shouldn’t be doing what you’re doing. And yet you still do it.” Some of the benefits of swimming derive, ironically, from daring to come as close as we can to this very fight for survival. That’s the sublime: the awe and the terror, together. Those moments of panic, the electric flashes of fear, are elucidating, exhilarating. The act of getting in is a small defiance of death itself.

In her 1937 essay “Undersea,” Rachel Carson eloquently described the ocean as a tangible way for humans to contemplate the vast interconnectedness of life. “Individual elements are lost to view, only to repair again and again in different incarnations in a kind of material immortality,” she wrote. It doesn’t matter if it’s the ear bones of whales or the teeth of sharks. “Against this cosmic background the lifespan of a particular plant or animal appears, not as drama complete in itself, but only as a brief interlude in a panorama of endless change.” We’re all connected in this vastness, and our presence in the sea is but a blip, a shout into the void. 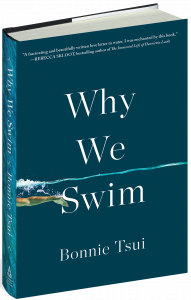 Bonnie Tsui, author of Why We Swim, lives, swims, and surfs in the Bay Area. A longtime contributor to the New York Times and California Sunday Magazine, she has been the recipient of the Jane Rainie Opel Young Alumna Award from Harvard University, the Lowell Thomas Gold Award, and a National Press Foundation Fellowship. Her last book, American Chinatown: A People’s History of Five Neighborhoods, won the Asian/Pacific American Award for Literature and was a San Francisco Chronicle bestseller and Best of 2009 Notable Bay Area Books selection. Her website is bonnietsui.com. 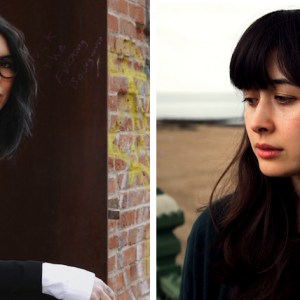 T Kira Madden is the author of the memoir Long Live the Tribe of Fatherless Girls. She is still an amateur magician. Rowan...
© LitHub
Back to top
Loading Comments...