Tomorrow, and potentially in the days and weeks that follow, many people will be on guard against agitational activity by white supremacist and militia groups like Patriot Front, the Proud Boys, and the Oath Keepers. The possibility of some degree of violence should not be downplayed, nor should it be the only thing on our minds.

Still, many writers and researchers who have been studying the mechanisms of white supremacy for years often reach a similar conclusion, despite the variety of their subjects and approaches: the most insidious elements of white supremacy are sometimes those you can’t see, unless you’ve been trained to look for them.

There were three authors who I wanted to hear from as Election Day neared. Two years ago, University of Chicago history professor Kathleen Belew came out with the book that led numerous media outlets to approach her this fall, particularly after the president’s “stand back and stand by” comment at the first debate. Bring the War Home: The White Power Movement and Paramilitary Movement is the culmination of a decade of research into the organized white supremacist cadres that began consolidating in the last quarter of the 20th century.

The materiality of white supremacy is the focus of Connor Towne O’Neill’s Down Along with That Devil’s Bones: A Reckoning with Monuments, Memory, and the Legacy of White Supremacy. O’Neill uses the afterlives (statues and other monuments) of the Confederate general and first Grand Wizard of the Ku Klux Klan Nathan Bedford Forrest as the narrative anchor for his exploration of why people across the nation are so deeply committed to memorializing the Confederacy.

And journalist Issac Bailey, a South Carolina native, wrote an essay collection that gathers his sharpest thoughts on police brutality, the Confederacy, white discomfort in addressing race, and much more–Why Didn’t We Riot?: A Black Man in Trumpland. As the former, long-time member of a predominantly white Evangelical church who also wrote for a mostly white southern audience, Bailey here alludes to his own struggles “to beat back white supremacist thoughts.”

Connor Towne O’Neill: In recent years, we’ve seen more pointed and persistent discussions about white supremacy in America. (Just to make sure that this wasn’t confirmation bias, I looked at Google Trends for the search term “white supremacy”—it’s a flatline from 2004 until about 2015, when the graph starts to spike like an EKG.)

What, to you both, are the most important forces giving this conversation a renewed heartbeat? Could you talk about the ways that you use history to grapple with white supremacy in your work?

Kathleen Belew: I think it’s helpful to talk through what scholars mean by “white supremacy.” In my teaching, I use this to refer to the complex web of personal beliefs, systems, structures, and histories that result in unequal outcomes by race—and here, we could look at incarceration, maternal health, COVID-19, wealth disparity, or any number of other factors to see evidence of a problem.

White supremacy can’t just be about David Duke and Richard Spencer and neo-Nazis marching on Charlottesville.

For me, the resurgence of the white power movement, encouraged at various moments by the Trump administration, has really opened up a conversation about white supremacy—perhaps one that has some utility towards change.

Issac Bailey: I’m a journalist and have seen white colleagues struggle with even saying the word “racist” or “racism.” In fact, I know of a prominent white White House correspondent who could not bring himself to say “white supremacy” even while writing a story about Rep. Steve King of Iowa literally talking about the term white supremacy with reverence. It’s that deep, it’s that difficult for us to navigate around these self-imposed restrictions on reality.

Because of that, I, too, spent a lot of time struggling with these issues in my work. I’ve mostly been a journalist in the Deep South, in the Carolinas. I’ve had largely white-conservative readerships I was trying to connect with. And I knew given that my white colleagues had trouble speaking forthrightly about these issues, it would be tougher for that audience to accept it.

For me, white supremacy can’t just be about David Duke and Richard Spencer and neo-Nazis marching on Charlottesville. It has to include what the likes of Thomas Jefferson and George Washington did and taught. It has to include policies designed to intentionally harm and demean Black people and uplift white people. If all it includes is those who scream the n-word or carry Tiki torches, it becomes meaningless, or at least it makes things too comfortable for those who are perpetuating some of its worst effects whether they know it or not. And I’m not above critiquing my own role in this mess, given that I know white supremacy isn’t only about what white people do.

KB: I know with my undergraduate students, sometimes the term “white supremacy” can feel like an accusation. White students with good intentions sometimes feel that because they themselves are not racist, because they didn’t own slaves or target civil rights protestors with violence, the term shouldn’t apply. This is where it is absolutely crucial to use the term, but to use it correctly—to refer not just to belief, but to the society in which we live.

We might look at maternal death rates, incarceration rates, property ownership, wealth distribution, COVID-19 infections—any number of areas show a clear disparity based on race. We live in a nation with unresolved racial inequality and a long history of racial violence.

But this isn’t meant to be accusatory, simply to point out that there is work to do. For all of us. It can be very painful to confront privilege, but it is much more painful to live a life threatened by white supremacy and limited by racial inequality.

It’s also interesting to note that while the United States is not unique in being a white supremacist nation, it is somewhat unique in not having confronted that history through a public dialogue. We have had no truth and reconciliation process, very little in the way of public monuments and museums, and we still find simply saying “white supremacy” or teaching about the history of slavery to be controversial and uncomfortable.

I can understand the discomfort. But there is no escaping the continuation of white power extremist violence without directly confronting our history.

CTO: I’ve also found a “there is work to do” framework to be useful in my writing about Confederate monuments. The received wisdom of American exceptionalism teaches white Americans that our history should flatter us, that we are constantly making this union more perfect and, given the admirable ideals handed down by our esteemed founding fathers, that progress is inevitable.

Monuments, which seek to immortalize figures from our past in positions of honor, reinforce this view. But, as you point out, Kathleen, our sense of history needs to do more than flatter us. It should hold us accountable, too. The increasingly contested status of our country’s monuments—Confederate, colonial, or otherwise—hopefully augurs a deeper reorientation in how white Americans understand and use history to understand themselves and the present.

We have the image of enslavers on our money.

That’s not to say that public history isn’t useful. To the contrary, I think memorials like the Equal Justice Initiative’s Memorial for Peace and Justice (more colloquially known as the Lynching Memorial) creates a sobering and, in my experience, harrowing space to reflect on the violence that undergirds and enforces the country’s racial hierarchy. The memorial includes a marker for each of the 800 counties in which a racial terror lynching took place.

The EJI has made a second set of those markers, arranged outside of the memorial, and each county is invited to claim their marker and display it publicly back in their respective counties. It’s an act that would be a step toward the kind of truth-telling projects you mention in South Africa and Germany.

IB: It’s hard to express what it feels like to be born in this country—and in particular the Deep South—as a Black man and have to experience almost everywhere monuments and memorials and statues built in honor of the men who raped and beat and murdered and enslaved our ancestors and enforced Jim Crow laws against our parents and grandparents and aunts and uncles.

It’s difficult to explain what it feels like going to the courthouse and seeing one of those memorials and going to a bank literally called “plantation” and see white developers sell high-dollar residential communities that evoke the supposed glamour and elegance of Gone With the Wind. We walk on soil soaked in the blood of the enslaved and had to face the indignities of having chains extended out into the ocean to mark where it was okay for Black people to swim.

That’s why, though, I can imagine what it would have felt like to be Jewish in Germany after WWII and had to live among statues dedicated to Hitler, because that’s what it feels like here. And on top of that, we have the image of enslavers on our money and if we speak too loudly about any of this, we are called ungrateful race-baiters. It’s exhausting. It’s frustrating. It’s belittling.

But what’s worse is that those markers of white supremacy tell only part of the story. The internal struggle to believe this dark skin and this kinky hair are beautiful, that the intellect spilling out of this Black brain isn’t an inferior versus, is an ongoing, never-ending one. That’s the part of white supremacy that is not spoken of enough, how it tries to convince Black people that we really aren’t worthy, really aren’t the equal of our white counterpart, and too often succeeds.

I’m a Black man born in the South who has spent the past couple of decades researching and dealing with the issue of systemic and other forms of racism, and yet I have to beat back white supremacist thoughts that have been embedded in my own head by the messages we’ve long had to absorb in this country. Oh, I can’t tell you how awful it feels to know you’ve been used as a tool of your own oppression. 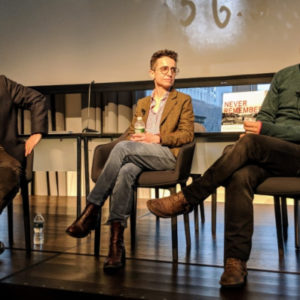 Masha Gessen on the Role of Memory After State-Sponsored Atrocity From the worldwide rise of populism and medical tourism, to Chinese smartphones and Nigerian Cinema—each season on Underreported...
© LitHub
Back to top