Funeral in Effigy for the Statue of a Klansman Confederate General

They built the coffin from cardboard, the body from papier-mâché, and at noon on a clear and cold November day, students at Middle Tennessee State University (MTSU) in Murfreesboro, Tenn., buried Nathan Bedford Forrest in effigy. On the lawn of the squat, two-story brick building, unremarkable save for the fact that it bears the general’s name, the group circled, held hands, and laid the body down.

The group had marched from the student union, a half-mile across the sprawling campus, to the impromptu burial ground in front of Forrest Hall, the university’s ROTC building. Two students, serving as pallbearers, carried the black cardboard coffin. Inside was the papier-mâché cast of the general, wearing a gray Confederate jacket and a Ku Klux Klan hood.

As they marched, they chanted: “Run, Forrest, run!”

“It was a really brave, smart thing to do,” Elizabeth Catte, then a Ph.D. candidate in public history at MTSU, told me. Forrest Hall is in the middle of the 22,000-person campus, a stone’s throw from the registrar’s office and the on-campus Subway. The burial raised the stakes in a campaign started that summer to change the name of MTSU’s Forrest Hall and was meant to galvanize support on campus. At the front of the march was Joshua Crutchfield, one of the leaders of the campaign. Crutchfield was then a masters candidate in history, studying activism in the Black church. Bookish and beaded, Crutchfield is a natural organizer, combining a deep knowledge of both history and political organizing with a contagious charisma.

Students, from Southern state schools to Northern Ivies, were holding their administrators to account for their statues, symbols, and building names.

When the march reached the lawn of Forrest Hall, Dalton Winfree, an MTSU senior with glasses, a scruffy beard, and a flop of hair, opened the coffin and removed the puppetlike effigy.

“Today we are having a burial of Nathan Bedford Forrest,” Winfree announced, “to send a message to the task force who refuses to acknowledge his racist past.”

The task force to which Winfree referred had been convened by the school’s president, Sidney McPhee, to determine the appropriateness of the ROTC hall’s name. Derek Frisby, a global studies professor specializing in military history, would lead a group of sixteen students, faculty, alumni, and community members to debate and then recommend to President McPhee whether the university should change the name, leave the name alone, or leave the name with “added historical context.” McPhee had announced the task force back in August, in response to on-campus protests in the aftermath of the Charleston Nine murders, when students, professors, and community members demanded the university remove the name that they felt mostly clearly represented white supremacy.

That fall, similar campaigns were being launched at campuses across the country. Students, from Southern state schools to Northern Ivies, were holding their administrators to account for their statues, symbols, and building names—taking such honorifics as indications of who belonged, whose histories were remembered, whose lives mattered. The murders in Charleston had sensitized many students to the values reflected by their campus landscape, and they found that American universities had much with which to reckon: histories of owning and selling enslaved people; campuses built with slave labor; buildings named for the intellectual defenders of slavery; active, and in many cases violent, resistance to integration; campus cultures still hostile to students of color.

MTSU, a public university, is now the state’s second largest school, and students of color make up a third of the student body. But for almost as long as MTSU has been a school, it has been tangled up in Forrest.

At Yale, this meant a campaign to rename Calhoun College—the residence hall named for John Calhoun, known as the intellectual architect of the Confederacy. At the University of North Carolina, this triggered protests to remove “Silent Sam”—an on-campus statue of a Confederate soldier. At the University of Missouri, this meant a campus-wide outcry over the administration’s tepid response to racist incidents on campus that included racial slurs smeared in feces on bathroom walls, leading a graduate student to stage a hunger strike and the football team to threaten to sit out upcoming games.

And, at MTSU, this meant a reckoning with Forrest.

Many in Murfreesboro see Forrest as their savior. This owes to a raid Forrest led in the summer of 1862, driving out Union occupiers from the town, saving several men from imminent execution, and returning the city to Confederate control (at least for five months, anyway, until the Battle of Stones River, a bloody affair in which the Union retook the city). Southern novelist and critic Andrew Lytle, in an admiring biography, dubs Forrest “the town’s deliverer.” And, as legend has it, a descendent of one of the men Forrest saved later donated land to the university. So, the Confederate logic went, no Forrest, no Middle Tennessee State.

MTSU, a public university, is now the state’s second largest school, known for its audio production program, and students of color make up a third of the student body. But for almost as long as MTSU has been a school, it has been tangled up in Forrest. At various points in the school’s history, Forrest has appeared in bronze on the front of the student union, in ink and on horseback at the top of the school’s stationery, embodied as a mascot on the sidelines of the football field; and, as the Dean of Students Beth Kethley said when dedicating Forrest Hall in 1958, his spirit has always been close at hand. This adoration helps explain why, 138 years after he was first laid to rest in Memphis’s Elmwood Cemetery, it was necessary now to bury Forrest in effigy. Decades of protests led by students of color had gradually forced the university to shed most of its Forrest emblems. The 2015–2016 campaign took aim at his last symbolic outpost: Forrest Hall.

The ensuing debate over Forrest’s life and legacy would turn on the same questions that were currently roiling schools and cities across the country.

The task force had until that April to make their recommendation, but should the group endorse a name change, it would only be the first handoff in a much longer relay. President McPhee would take that decision under consideration and, should he agree, he would then make his recommendation to the Tennessee Board of Regents, who oversee Middle Tennessee State. Then, should the Board of Regents likewise concur that the name should be changed, they would have to appeal to the Tennessee Historical Commission for approval to rechristen the ROTC building.

That last procedural hurdle would come from the Tennessee Heritage Protection Act, passed in 2013, which requires the state’s historical commission to sign off on any change to monuments on public property. The Heritage Protection Act (sometimes jokingly referred to by journalists in the state as the Nathan Bedford Forrest Protection Act) was passed as a rear-guard response to the decision by the city of Memphis to rename Forrest Park earlier that year. Confederate memory was well fortified. State senator Bill Ketron (Republican, Murfreesboro; MTSU ’83) sponsored the Heritage Protection Act and would serve on the Forrest Hall task force. The first public forum would convene two weeks after the symbolic funeral; the task force would hear from all comers.

The ensuing debate over Forrest’s life and legacy would turn on the same questions that were currently roiling schools and cities across the country: questions about racial equity, about whose memory matters, about what our symbols say about who we are and what we need. And the debates over these questions would reveal a deep rift in American life. As a prelude to this battle, the students laid his papier-mâché body low. Holding hands in a ring around the coffin, the protesters sang and chanted. When they dispersed, they left the body on the stoop of his hall. 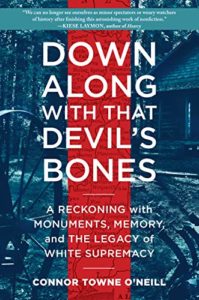 Connor Towne O'Neill's writing has appeared in New York magazine, Vulture, Slate, RBMA, and the Village Voice, and he works as a producer on the NPR podcast White Lies. Originally from Lancaster, Pennsylvania, he lives in Auburn, Alabama, where he teaches at Auburn University and with the Alabama Prison Arts + Education Project. Down Along with That Devil's Bones is his first book. 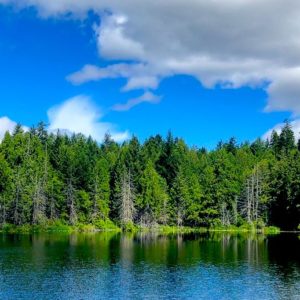