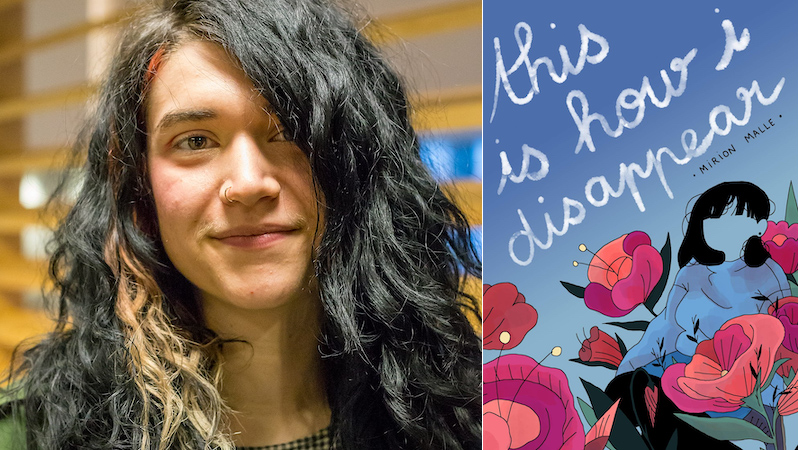 “What Should We Watch Tonight?” On the Concept of Choice Architecture

It is an illusion, really, that we alone determine what we choose. You walk into a restaurant and order a sandwich. Your spouse asks you what movie you want to see. Your doctor asks if you want to try a new drug to control your cholesterol. You search for a flight home for the holidays. You select an investment fund from your employer’s retirement plan. You may not realize it, but in each choice, you have a hidden partner.

You choose something, but the restaurant, your spouse, the doctor, the airline’s website, and your employer have all made decisions about how to pose those choices to you. Their design decisions will influence, intentionally or not, what you choose. The restaurant organized the sandwich options you saw, maybe with vegetarian on the right, meat on the left. Your spouse suggested some possible movies, but left others out. The doctor decided how to describe the consequences, side effects, and benefits of the drugs you could take to control your cholesterol. The website decided how to sort the flights and whether to present certain pieces of information, like the on‑time performance of the flights and the baggage fees. And finally, your employer had a fund it would use for your retirement account if you did not make a choice.

We might vaguely agree that external factors influence our choices, but we don’t appreciate that there are large and systematic ways in which presentation can change what we choose. Years of research have shown again and again that the way choices are posed affects our actions. We’re much more likely to choose a retirement fund if the employer’s website preselects that option for us. We make different choices if our doctor says that serious side effects occur in 1 percent of cases, as opposed to saying there are no side effects in 99 percent of cases. And while you might be convinced that you are picking the sandwich, many things about the menu, like the order of items and the headings of the categories, helped you make that choice.

All these details are part of something called choice architecture, the many aspects of how a choice is posed that can be manipulated, intentionally or inadvertently, to influence the decisions we make. The options may be the same, but the presentation can change your choice.

Before you make a decision, someone has molded many of the characteristics of that choice for you, and these design decisions will in some way affect what you choose. This book takes a close look at exactly how the way choices are presented can change the decision‑making process. Whether they realize it or not, the people who present those choices—the restaurant owner, your spouse, your doctor, your employer—are choice architects. Stated more simply, choice architects are the designers of the decisions you make, just as you are the designer of countless choices for others and for yourself. To keep things simple, I will call the choice architects designers and the people making decisions choosers.

Choice architecture can be harnessed in surprising and surprisingly powerful ways, with positive results for both the designer and the chooser. But to do so, we must look closely at every detail of a choice’s design, including elements we don’t normally notice. After all, when we encounter a choice, we are too busy making the choice to contemplate how the presentation of options affects us. But get those details right, and better decisions can emerge.

Choice architecture: the many aspects of how a choice is posed that can be manipulated, intentionally or inadvertently, to influence the decisions we make.

I became interested in decision‑making and decision design as I contemplated college. Coming from a working‑class, Levittown‑like suburb in New Jersey, it struck me that many of my friends from high school were considering very different options for their lives. In my high school, there were many academically talented students, but some were delighted to go to the local community college, and others, equally qualified, were applying to Ivy League schools. What made them consider different options? I saw, in the years that followed, that the choice of what to consider in large part determined their future.

Being lucky (and foolish) enough to talk my way into places where pathbreaking work in decision‑making was done, I found myself in graduate school at Carnegie Mellon, and a postdoc at Stanford, places central to the beginning of a revolution in decision research and behavioral economics. This revolution was based on the idea that people use simplified rules of thumb, or heuristics, to make decisions. The classic demonstration involved people making inconsistent choices, caused by things that should not matter. Describing the same options as gains or losses can change choices. Telling people about irrelevant numbers can change how much they are willing to pay. People are much more willing to pay for insurance against a vivid risk, like cancer, than they are willing to pay for insurance that covers all diseases. There was soon a list of these effects, which was sometimes called “stupid human tricks,” after David Letterman’s comedy bits.

These results were usually cast as showing how people are irrational and generally bad at making decisions. I had always been interested in public policy and improving decisions, and I realized that we could flip that framing for positive ends: instead of exposing people as bad decision‑makers by showing they were inconsistent, maybe we could make them better decision‑makers by exploiting these inconsistencies. By changing how their choices were posed, we might help them make better decisions.

About this time, I was at the Wharton School of the University of Pennsylvania, organizing a team studying insurance decisions. We noticed that Pennsylvania and New Jersey were about to introduce new, less expensive types of auto insurance. Each state required insurance firms to use a different choice architecture to present the auto insurance choices. We predicted, correctly, that because of the way the choices were presented, the new policy would be more popular in New Jersey than in Pennsylvania. We wrote the governors and insurance commissioners of both states and even wrote an op‑ed in a Philadelphia newspaper. Everyone ignored us, but the impact of the choice architecture was massive. The new policy was three times more popular in New Jersey. Because of their choices, Pennsylvanians paid billions of dollars more for auto insurance. Years later, my friend Dan Goldstein and I used the same idea to show that choice architecture made a big difference in whether people agreed to be organ donors.

A few years after that, I was working with a German auto manufacturer, consulting on the choice architecture of its website. On the site, people could pick engines, interiors, colors, and many other options when buying a car. But the auto-maker was presenting those options to buyers in a way that was detrimental to everyone involved: the automaker was losing potential revenue by guiding buyers to the cheaper options, and those options didn’t really meet the buyers’ needs or desires. With a few simple changes, we were able to increase the company’s profit and improve customers’ satisfaction with the vehicles they ultimately purchased.

More recently, I was a senior visiting scholar at the newly formed Consumer Financial Protection Bureau, consulting on many issues related to choice architecture. How do you write disclosures for loans and mortgages? How can you display information about a complex product, such as a pre‑paid credit card that has many different fees, given that the card has to fit in a wallet? How can you encourage people to comparison shop? And my favorite: How can you make sure people know what they’re signing up for with overdraft protection, a banking service that pays your bill when you overdraw from your checking account? The bank will often charge something like $35 for each overdraft. Some people want this coverage, but others are incensed when a cup of coffee ends up costing $38 because of an overdraft. How can you make sure that everyone who has the product has made a good and informed decision?

Choice architecture is not just about how websites are designed or how policies are implemented. It is not just about professionals and researchers. We are all designers every day, posing choices to our friends, colleagues, and families. My friend is also a decision designer when, instead of asking his three‑year‑old whether she is ready to go to bed, he asks if she prefers to fly into bed or bounce into bed. He reported that bedtime became much less stressful for everyone involved when he started presenting options instead of a yes‑or‑no choice. 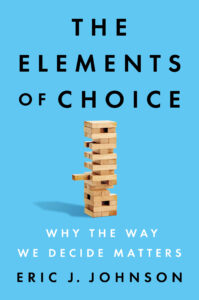 From Elements of Choice: Why The Way We Decide Matters by Eric Johnson published on October 12, 2021 by Riverhead, an imprint of Penguin Publishing Group, a division of Penguin Random House LLC. Copyright © 2021 Eric

Eric J. Johnson is the Norman Eig Professor of Business and the director of the Center for Decision Sciences at Columbia Business School. He has been the president of both the Society for Judgment and Decision Making and the Society for Neuroeconomics. He lives in New York City. 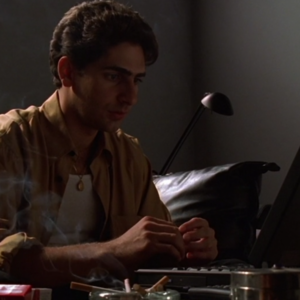 One of the incredible writers on The Sopranos was Terry Winter. Among the twenty-five episodes he wrote were some of my favorites....
© LitHub
Back to top
Loading Comments...