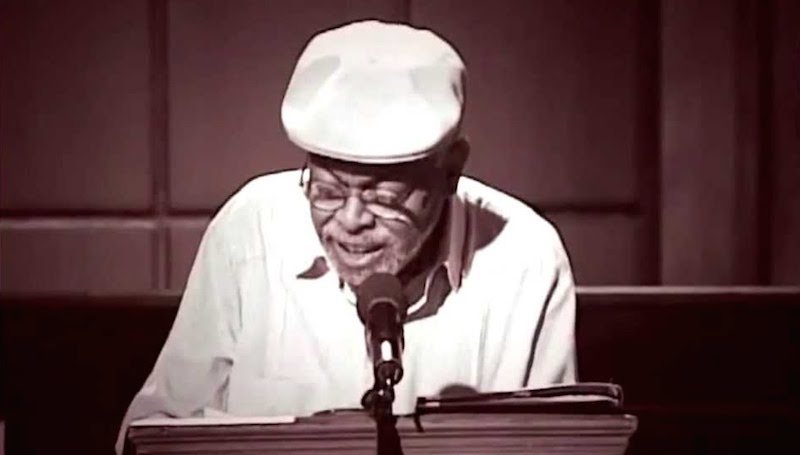 What He left us

In 2004, I’m in my grandma’s basement on the red velvet couch writing in a notebook labeled “Danez’s Thoughts and Ideas Vol. 1”, inside which live my first attempts at poems, some rap verses where I try on my best Ludacris impression, and lines I’d write down while listening to Def Poetry, my then secret favorite show. On this particular night, Mos Def walked onto the stage to introduce the next poet. I knew it was about to be good because 1. They actually showed Mos Def introducing him,  2. Mos called him legendary and  3. Every black person in the studio audience gave a standing ovation at the mention of his name (I take the standing up of black folks to be a fairly serious event). Amiri Baraka recited an excerpt from “Why is We Americans” ending with the line “either give us our lives or plan to forfeit your own.”

“Holy shit.” That line smacked me upside the head. It was a war cry. It was dangerous and blunt. It was a dare, a mean mug, a call to get froggy, to leap. It was like meeting a long lost uncle or like watching your granddad and understanding where your father comes from. Watching that performance and scanning the prehistoric Internet for whatever I could get from Baraka gave me a context for where my poetry teachers were coming from. I started writing because of the local youth poetry scene in the Twin Cities, in the hands of writers whose poetics were unapologetically tied to social justice and communal concerns, bridging the confessional/personal and the political, balancing music and storytelling. You get it: Spoken Word, in this case through the lens of slam poetry, for which Amiri readied the space later to be constructed.

On a craft level, spoken word, and by extension slam, still pulls from the Baraka & Black Arts Movement’s experiments in musicality, lyrical, and colloquial tensions, pushing language to its political and cultural limits. Baraka makes statement out of rhythm and sound, reclaims and reinvents stolen tongues, peep game:

if you ever find

who won’t let you

speak in your own language

who destroy your statues

then you are in trouble

you in deep deep

I don’t take Baraka’s decision to speak the drum’s tongue here lightly. I take everything he says to be intentional and natural and dangerous. Brotha understood the power of code. Baraka wrote blackly for a black world, never flinching from his gut opinion, controversial as it was at times. But no matter what, he’s staring black folks in the eye, giving us complicated calls to understand ourselves through music, through cultural caricature/critique like the speaker in his poem “Dope” (“can’t be them rich folks / theys good to us theys good to us … I know the / massa told me so”), or however he decided to shape his black that day. Harsh as it sometimes was, needed as it was often, Baraka challenged us to define our blackness, to stand in it. And that’s some bad-ass shit:  1. to be black and  2. to do so loudly while white people are looking. “IT’S / NOT NECESSARY / THAT THEY UNDERSTAND // THIS” he wrote at the end of the poem “Forensic Report”, speaking out to a black reader while knowing that the poem would also end up in white hands, saying things we are taught to view as taboo or dangerous (to whiteness).

(Here is where I want to say something about the anti-Semitic, misogynist, and homophobic aspects of his writing, to try at writing something that accounts for his complicated history with whiteness & gender & queerness, but can’t. I mean, yes, dude was hella wild for a lot of things he said, but who wouldn’t be with all those selves & all that history, rage, fear, hope, ghosts, & futures boiling upside you? What to make of a man who can say the things he’s said but still can write such a naked queer poems like “An Agony. As Now.”? What do I know of America in his day in tangible ways? I can attempt to imagine a landscape and time that takes a Newark boy to being a young, Black, queer ex-military man married to a White Jewish woman in the Village to the founder of the Black Arts Movement whose merit is often overshadowed by his prejudices? But what the hell could I say that means anything? I’ve been black all my life. For a month in college I considered myself an ex-gay cause, seriously, being black was on its own enough, and at the time most of what I knew of blackness denied queerness. Amiri was no god. His brilliance and passion were as public as his flaws. I don’t know whether his bigotry steamed from ignorance or a denial of a [former?] self, but I know what? Everything about that feeling? How hurt can eat away at a body? The prejudices we develop as survival tactic? Nothing?)

What the hell to do with that? How to complicate controversy? What did he leave for us to take note of? For myself, from the conflicting opinions, I can gather how vital and visceral poetry is to the society and the citizen when it forces you to feel any kind of way your self and your world, that it can be a catalyst for revelation and revolution as much as it can be one for complacency (a critique some might have of Baraka’s critics). If we subscribe to the ways Barakian (yeah, I’m making that a thing if it’s not yet) political poems operate, we recognize ways in which poetry is sermon, is shit talk, is sanctuary, is riot, is not a luxury (shout out to Lorde), is bold, at times rude, and is not doing its job if someone isn’t upset with you. I’ll subscribe to that. I’m all the way down. I’m about poetry that doesn’t have time for what it considers bullshit, strong poetry too grounded in its own ways to be concerned with popularity, and that hopefully isn’t above change.

I mourn Baraka as I mourn my grandfather: complicated, full of praise and critique, often trying to follow in particular footsteps. The blueprint he leaves for those of us invested in a personal, political poetics is one that requires risk, constant questioning and dismantling, fearlessness, and a handful of pissed-off readers. It’s good, hard work. It’s messy and often you will get it wrong. It’s work that puts the message of the poetry above the poet’s ego and career. It’s work that requires reaction at its most successful. It’s work that knows its history and constructs its own future. It’s work that reclaims languages and stories, that calls us to gather and to deploy, that in the right hands is transformative and galvanizing, while in others, hopefully, can get you into deep, deep trouble.

Harmony Holiday:  The G Closes in On a Riot

Danez Smith is the author of Don’t Call Us Dead, winner of the Forward Prize for Best Collection and a finalist for the National Book Award, and [insert] boy, winner of the Kate Tufts Discovery Award. They live in Minneapolis. Their latest poetry collection, Homie , is available now from Graywolf. 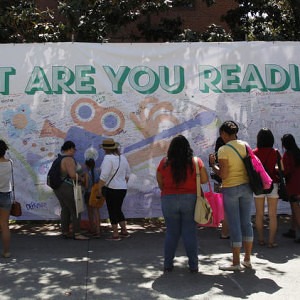 The Festival of Books has nonstop programming happening in 13 conversation rooms and on nine stages. In an ideal world I would...
© LitHub
Back to top