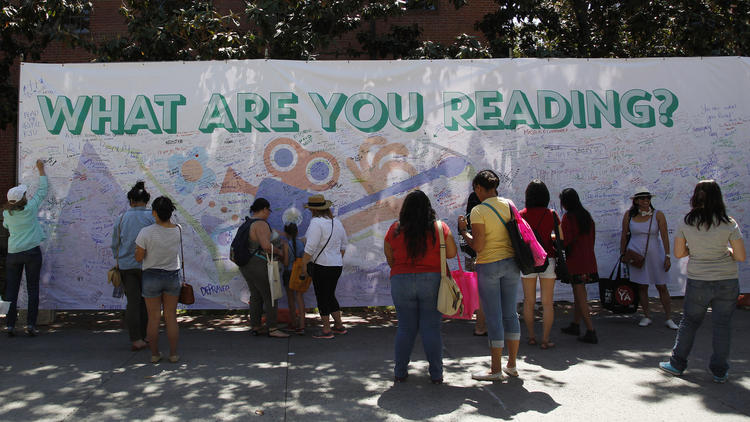 Claudia Rankine, Valeria Luiselli, and Handselling on the Internet

The Festival of Books has nonstop programming happening in 13 conversation rooms and on nine stages. In an ideal world I would have been in multiple places at once, but am instead constrained by the laws of physics to be in one place at a time. These are some of my highlights from the weekend:

The morning after receiving the LA Times Book Prize for Poetry, Claudia Rankine joined USC professor Brighde Mullins to talk about Citizen: An American Lyric. Rankine read several pieces, and hearing them come alive through her voice was magical. She also explained the genesis of those pieces—the conversation that led to her exploring the choice to sit beside someone on a train when others do not, as well as the real-life incident recorded in the final piece of the collection. Rankine said the “stakes were a little higher” as she approached the visuals for the cover of Citizen. Her choice of the Turner painting and its detail at the conclusion of the book was spurred by a desire to conclude with the visual, since the visual perception of racial difference is the instigator for the microaggressions throughout her book.

In addition to Claudia Rankine’s win, other highlights included LaVar Burton’s Innovator Award and Valeria Luiselli’s Seidenbaum Award for First Fiction. Burton received a standing ovation and a very emotional response from the crowd, many of whom, like me, grew up with Reading Rainbow. Luiselli delivered a speech she wrote while detained by ICE at LAX on her way to the Festival, bringing a little of the political to her personal triumph. The other winners include T.C. Boyle’s Robert Kirsch Award, Jeff Hobbs for Current Interest, Siri Hustvedt for Fiction, Andrew Roberts for Biography, Jaime Hernandez for Graphic Novel, Adam Tooze for History, Tom Bouman for Mystery/Thriller, Elizabeth Kolbert for Science/Technology, and Candace Fleming for Young Adult Literature.

This panel was moderated by Dinah Lenney, with panelists Nelson George, Amy Wilentz, Hector Tobar, and Mark Haskell Smith. Each of the panelists has published both fiction and non-fiction and discussed how each discipline has its own needs and yet informs the other. As George put it, “Fiction is fun, non-fiction is work.” Wilentz doesn’t find the same sense of fun, but enjoys it in other writers. Tobar described joy, rather than fun, and Smith talked about a sense of play. The authors also discussed their interviews for non-fiction work and the level of responsibility it brings to the finished work, as they honor and accurately represent their subjects. Tobar, in discussing his fiction, also brought up his sense of responsibility to the fictional characters he writes.

Moderated by Joy Press, this panel featured Meghan Daum, Maggie Nelson, and Rebecca Solnit. Solnit recounted the anecdote that led to her essay “Men Explain Things to Me,” which led to a discussion of the rise of the term “mansplaining.” The three panelists all had varying approaches not only to the term and its usage, but to the art and practice of writing non-fiction, as well as the reader’s role in interpreting the political from the personal. It was affirming to hear that there is a place and need for each of their approaches, even as they and other female writers receive criticism from readers for writing “pundity” pieces, as Daum said. Each writer shared some of their personal canon. Daum mentioned Joan Didion and Pauline Kael, as well as the awakening experience of reading Lester Bangs. Solnit’s list included Jorge Luis Borges, George Orwell, Virginia Woolf, Isak Dinesen, Ariel Dorfman, and Eduardo Galeano. Nelson paid tribute to many authors, including the Marquis de Sade, James Baldwin, Susan Sontag, and Eileen Myles, as well as her current reading of Ellen Willis. Nelson also passed on wisdom from her writing teacher Annie Dillard regarding the time Nelson asked, “How do you write something long?” Dillard replied, “Write a lot of short things and put them together,” which is a reminder Nelson says she gives herself throughout her writing.

I also attended a panel on the role of new and social media for connecting writers and publishers to readers. Exploring ways to share book recommendations and love, as well as creating new platforms for emerging voices excited me for the future of publishing in new and traditional models. Gina Frangello, the panel’s moderator, spoke about Tumblr and Goodreads as platforms for handselling on the Internet, giving a wider voice to the recommendation of a booklover, and the former booksellers on the panel concurred. As a bookseller myself, I couldn’t keep away from a panel on bookstores either. I continue to be encouraged by the optimistic reports coming from independent bookstores, that we’re doing well and are no longer facing a total destruction at the hands of e-readers and giant online retailers. In discussing the community that arises around a bookstore, each of the panelists talked about the way customers find another home in their bookstores, a place where customers can celebrate a good day or erase the effects of a bad day. David Kipen, one of the panelists, said, “There are very few surly booksellers,” as a way of explaining that comfortable connection found in stores. The booksellers in the audience laughed, and I doubt I was the only one to think of at least one occasionally surly bookseller I know. Finally, I loved running into fellow booksellers, publishers, writers, and regular customers as I navigated the crowd and was reminded of how big and vibrant the book loving community is in Los Angeles.

What He left us 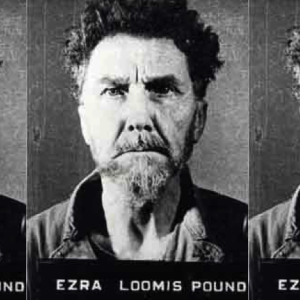