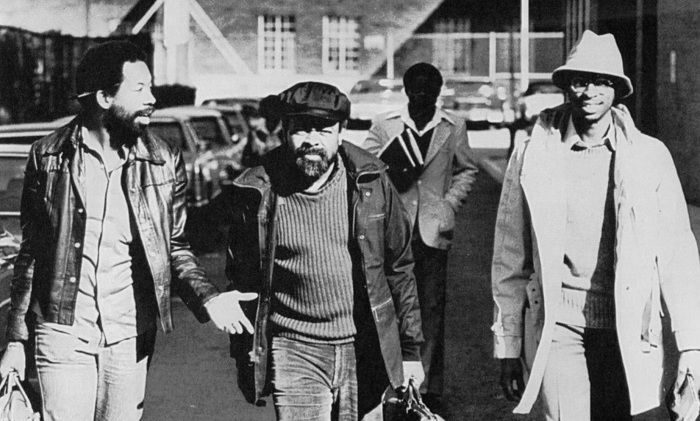 A poet in conversation with Coltrane and Monk

Amiri Baraka loved his people. Loved us romantically, paternally, loyally, protectively, proudly, fiercely. This deep, intelligent love—uncompromising and impatient, sacrificial and bottomless—is the wellspring of all his poetry (indeed, of all his work, literary and otherwise). It drove him to tell us what to do and what to think. It motivated all his cautions and dire (often Cassandra-cursed) predictions. Love (and I’m not the first to say this) fueled all his attacks and tirades, whether cursing out his people for not acting in what he saw as our own best interests or, on the other hand, eviscerating the justifications and defenses of his enemies—those whose actions endangered and diminished his people’s lives. All the rage, the bitter humor, and profanity in the poems came from the same place as the praise, the celebration, and the tenderness.

The constitution of “his people” changed over time and grew as the scope of his analysis grew. With his family as a given, Baraka’s poetic (and ideological) embrace extends in different contexts to include as well communities of innovative, risk-taking poets and musicians, at one moment; disempowered residents of Newark, at another; black people struggling against the forces and structures of racism and colonialism, in one period; and, ultimately, workers and revolutionaries worldwide, of any race or ethnicity, suffering under and fighting the exploitation engendered by global capitalism. Because vast power and wealth is concentrated in the hands of a very few, the odds are overwhelmingly in favor of your being part of the masses of people he claimed and wrote to, about, and for, in the latter part of his life—whoever you may be and however little you may identify with him or his ferocious critique of structural oppression. This is not to say that the encounter with Baraka’s work comes without vexations. His writing can be tough to love, at times. Reading and teaching parts of his oeuvre, especially work from the first two decades, I find myself struggling with a number of poems that leave me or my students feeling personally excluded and maligned, or strongly at odds with him on a variety of grounds; indeed, anyone might disagree with some aspect(s) of the politics that have, at one point or another, informed his work. But is that why we read poetry? To “agree”?

I read—and recommend—Baraka’s poetry because it is some of the most aesthetically lively, formally innovative, intellectually provocative, and downright beautiful poetry written in the last one hundred years. On top of this, his oeuvre serves as a grimly incisive primer in modern politics, a black culture/pop culture storehouse, and a wide-ranging inverted historical reference work (in which he references everyone and everything from Socrates and Sojourner Truth to the destruction of libraries of Alexandria and the Citizens United case, and you must go look them up). Please take “Black Art” and “Somebody Blew Up America” off loop and give yourself the pleasure of engaging with all 528 pages of S.O.S.

Try approaching this collection the way I did, reading from back to front, making your initial (or renewed) encounter with the poet writing in our contemporary moment, with all the accumulated wisdom of his sixty-to-eighty years of experience running through the lines. Time doesn’t weigh heavily on these poems; they are as full of verve and venom as ever. In describing our “Nightmare Bush’it Whirl,” he bemoans us:

Wait’in on the beboppers to arrive

And talking the smack of

Won’t be no act

No it wan be, can’t be like that, in history and now be the future befo’ you

He is still laying down rhymes like dimes, still sharpening black vernacular for the kill. It is a sure hand that resists breaking the penultimate line of this passage on the rhyme (“befo’”), trusting us to hear it, and choosing instead to put the visual stress on the “change”—what they’ve got and what we need, in more ways than one—to get the most humor and bite out of the double-voiced reference to “nasty… drawers.”
Oh, yes, the poetry is still political, but it gives us myriad additional ways to understand what has been Baraka’s argument all along: that there’s little, if anything, in this “whirl” that is not. We see how the purportedly separate realm of the political informs and gives meaning to decidedly personal relationships in one of the most moving poems in the collection’s final section. “I Am Sent Photographs of My Aunt Georgia’s 90th Birthday Party in South Carolina” gives us the poet’s refusal to accept the decline of “that woman who was once / So full of breath, the sun, life, to me / That winter I was undesirably discharged / From America.” We know that, as a young man in the 1950s, Baraka received a dishonorable discharge from the Air Force for owning texts associated with communism. Struggling to “cast his being up through the menace of being that [undesirable],” the young Baraka finds in his “Auntie” a model of strength, resistance, and self-acceptance that were unusual in that place and time:

Ironic, in the midst of that. At herself. At them. The world. That’s why

She talked so fast! That softly sharping

“titter” that held the world somewhere, beyond arms’ length. Near the moon

of whatever was her deep desire. Yet to be there, in that, and expecting it to

desire her, as she, half consciously accepted what it was

and the limitations to her streamlined rocket feeling self. Oh Jezus, Jezus,

that little boy looked into her face, and she into his, and what they didn’t

understand of each other

was what they loved most.

I have spoken elsewhere about the challenge of being a woman poet asking herself precisely what she has inherited from this particular poetic forefather. This poem, with its perspicacious account of his aunt’s rich interiority and agency, is among the more satisfying answers his oeuvre provides. It also reminds us that Baraka was not born invulnerable—was not ever invulnerable, was only ever human, whose armor, shield, and sometimes indiscriminate sword were all forged of intelligence, heart, and words.

Alongside all the drawn razors of political critique and all the rough-brushed lyricism he applies to his canvases, there is the music. He depicts the musicians whose artistry inspires him, and gives us those depictions in poems that help us understand how much his poetry constitutes a lifelong jam session. Two of the musicians his work is most in conversation with are John Coltrane and Thelonious Monk, whose innovations in jazz represented for Baraka a kind of pinnacle in the political force of art. Both the saxophonist and the pianist appear in Baraka’s 1979 poem “Am/Trak,” from which I cannot resist quoting. Compare their portrayals:

But Trane clawed at the limits of cool

With his tryin to be born

yeh go do it

a why I’m here

You might have to listen to a couple of cuts by each of them to understand how ingeniously Baraka’s syntax, tone, visual layout, and diction capture the distinct styles of these two highly original artists. But the fact that his poems direct the reader outward is par for the course. You need to know something about the worlds in which Baraka lived to fully appreciate any of his poetry, because the reasons he’s writing them are so grounded in those worlds. One of those reasons is pedagogical: he is very purposefully dropping knowledge, as they say—packing his poems with references to Trane, Monk, Bessie Smith, Du Bois, Pedro Pietri, Douglass, Tubman, Stevie Wonder, Malcolm, the Rosenbergs, Lumumba, Langston, Zora, Garvey, Nina, Walter Rodney, Biko, Allende, and David Walker (and the list goes on), because he understands that your familiarity with these people and the things they’ve done and created and stood for can save your life.

Baraka loved Monk, Coltrane, Bird, and all the rest, because he heard (and saw) in their work the same love of freedom that burns through his oeuvre. He loved freedom not simply on his own behalf, but on behalf of everyone he perceived as being unfree—which was more and more of us (though in different ways and with different effects), as his understanding of the problem of oppression increased. If that love, as it radiates through the poems, is tough and exacting, well, that may simply be the price we pay for their illumination. In Baraka’s own words (from the aptly titled poem “Outsane”): “You wanna get rid of shadows / You got to lock up / The Sun.”

Harmony Holiday:  The G Closes in On a Riot

Danez Smith:  What He Left Us

Evie Shockley is a poet and scholar. Her most recent poetry collections are the new black (Wesleyan, 2011) and semiautomatic (Wesleyan, 2017); both won the Hurston/Wright Legacy Award, and the latter was a finalist for the Pulitzer and LA Times Book Prizes. She has received the Lannan Literary Award for Poetry, the Stephen Henderson Award, the Holmes National Poetry Prize, and fellowships from the Radcliffe Institute for Advanced Study and Cave Canem. Shockley is Professor of English at Rutgers University.

The G closes in on a riot 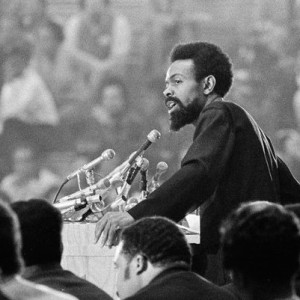 One of the ga-zillion great, regular things Amiri Baraka did long before this project was an idea, was to invite my housemates...
© LitHub
Back to top